THE CONNECTION BETWEEN MENTAL & PHYSICAL HEALTH | MY TENDON SURGERY 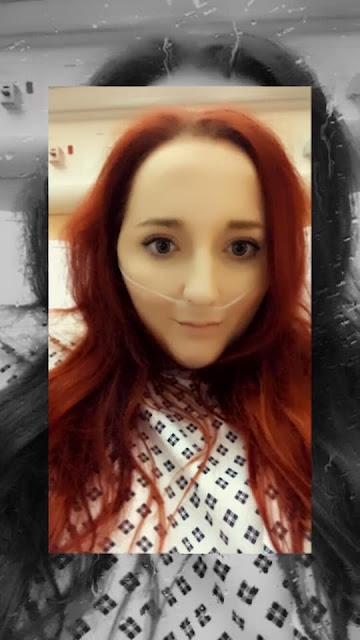 There’ll probably be some people who follow me on Twitter who will be surprised that it’s taken me so long to blog about my recent injury and the subsequent surgery. I guess that with me putting the majority of my life on I’m NOT Disordered and social media(!), some people assume that I’ll talk about anything and everything. Whilst it’s true that I probably have less privacy boundaries than most people, you guys don’t know everything and sometimes it’s less about keeping things from you and more about me not being ready to talk about something. And that’s the case here… After meeting with my GP today and having a good cry and talk with her, I finally feel able to talk more about what happened to me on Boxing Day.

Even after all I’ve gone through with this injury, I still feel silly when I tell the story of how it occurred… I was attempting to open a bottle of Prosecco on Boxing Day with my Mum when I heard a funny noise and all of a sudden, I couldn’t move my thumb. Like, at all. I thought I’d dislocated it so we went straight to Minor Injuries but after an x-ray I was shocked when the Nurse told me it wasn’t dislocated or broke and told me to go home and put it in warm water to try and slowly start moving it. Now, I’m one of those people who believe that no one knows your body better than you do so I was really reluctant to leave the hospital because I felt so sure that there was definitely something wrong – more than the muscle just stiffening. 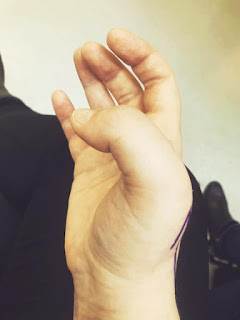 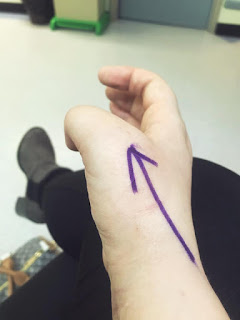 Two days later, I was still unable to move it; it would just sort of… hang there. I couldn’t lift it or do a ‘thumbs up’ position. So, I went to Accident and Emergency and my first words to the Triage Nurse were ‘I feel so stupid coming here for my thumb!’ He sent me to a different department and when the Nurse called me through to a room he stared at my thumb and said; “well that doesn’t look right!” The relief I felt from that simple declaration, that little acknowledgement that yes, something was wrong… well, it was everything to me in that moment. Validation has always meant a lot to me throughout my mental ill health so I guess it makes sense that it would to my physical health too. To feel that I finally had someone taking me seriously and actually caring about it all was reassuring because it’s horrible to feel that something is wrong and have the people who you know can find out about it, dismiss you. I had been left feeling pretty hopeless – something which is never a helpful emotion. 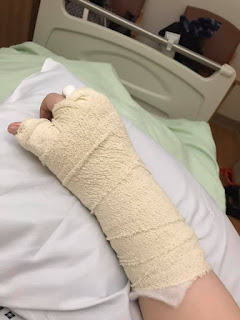 Now, I’m not always one for blaming everything on the trauma of the abuse but I do think that it’s had an impact on these thoughts and feelings around being dismissed and needing validation. I was very lucky in that the worst reaction to the news I’d been abused was mostly that which I had concocted in my own head and only one that I actually ended up experiencing when I finally reported the abuse. I’d told myself – and been reassured by my abuser – that people wouldn’t believe me and that I’d be branded a liar or believed that it’d happened but told that I’d deserved the entire thing. The thing was, yes, the worst reaction only happened once but sometimes, that’s all you need to knock you back all the steps you’d taken forwards to find the courage to report it. The first person I ever told called me a ‘manipulative liar.’ I guess it’s no wonder that I kept quiet for two years after that. Maybe, though, this has rubbed off onto my general way of thinking and that’s why the simple acknowledgement that something was wrong with my thumb by the Nurse, helped me so much!


So, after asking me many questions about what little mobility I did have in my thumb and what I was unable to do; the Nurse sent me for an X-Ray to confirm there were no breaks or dislocation and when it came back ok, he called the Plastic Surgeon down. After a thorough examination, the Surgeon concluded that either the ligament had snapped – which would take a while to heal – or it was the tendon; in which case I would need surgery. I was given an appointment in the Plastics Trauma Clinic the following day and went home!


The next day, I saw a new Surgeon who – after another examination – determined that it was the tendon and offered me the opportunity to ‘go away and think about’ whether I wanted the risky and painful surgery or was willing to accept that I had lost some function and mobility in my thumb permanently. Of course, being a Blogger and loving social media, I agreed to the surgery and was rushed into theatre that day. I was offered a special anesthetic that they named a ‘block’ where the entirety of my arm would be numbed but I opted for general anesthetic. I explained that whilst my mental health is pretty damn strong; my anxiety would hit the roof if I were to be conscious during the procedure. So, I went to sleep and woke up in agony because on the first incision they made, the tendon appeared fine but when they examined it further along, my EPL (Extensor Pollicis Longus) tendon had ‘completely ruptured’ and another tendon had ‘frayed.’ The pain I felt waking up from that surgery was unbelievable. I won’t be dramatic and say it consumed my entire body, because it didn’t; it was in my hand! I could still tell you what hurt; just through tears and screams. I vaguely remember seeing my Mum and then a Nurse coming into the room and someone saying; “try and watch the TV while the medication works!” but as much as I could pinpoint the pain to my hand, it was all that I could think about. Like, I literally wouldn’t have been surprised if I’d suddenly forgotten how to breathe for a minute or two because I was too busy distracted by the pain. Eventually, though, the Oromorph (oral Morphine) worked and I stayed in hospital overnight and went home New Year’s Eve!


And now, three weeks later, I’ve found myself on the cusp of needing more surgery! I was told that because the snapped tendon hadn’t been found when I’d first attended hospital, the recovery from surgery would be ‘harder’ than if they’d found it and operated then, but no one really gave me a good idea of what to expect. I mean, there are of course things that I should’ve thought of myself like ‘how will I be able to shower?’ and ‘what will I do to make notes in my training for the new voluntary job?!’ But I guess my brain was so caught up in the pain that it couldn’t think too far ahead to the actual consequences that the pain would have.


The reason I think that I’ve struggled so much with not being able to do everything I want to, is something that made me cry to my GP the other day. It’s just that I spent so many years feeling suicidal; I mean, I tried so hard to end my life that I ended up on life support, and now that my medication is right and my mental health is on top form, I want to live life to the full. I’ve seen, in twenty-eight years, that life is too short and to cope with this fact, ever since I learnt it, I’ve taken all of the opportunities that come my way. I’ve said yes to all of the blog collaborations, the days out with friends, the voluntary jobs, the event invitations… And now? Now, through no fault of my own, I can’t do that anymore. And yes, I know that the level (there’ll always still be some level) of immobility is temporary, that doesn’t really make it any easier to cope with.


And I know that some people might think that I should be more grateful that it isn’t as bad as others may be experiencing but it’s bad in my life. Never compare your pain to that of another. If it’s the worst thing in your life, then it shouldn’t be minimized by comparing it to the worst thing in another person’s life. Don’t be patronized and have your pain made to feel insignificant. If it matters to you, then it matters.


Today I have an ultrasound booked to see if the repair is holding, but the Surgeon said that clinically, it seems that it isn’t and if it is not then it means a harder surgery; a transfer of part of another tendon to the one that has snapped. With it being a harder surgery, it’s apparently also a harder recovery.


Can I take it on anyway?