FROM BLOGGING TIPS TO MENTAL HEALTH DIAGNOSIS | EVERYTHING YOU ASKED MARTIN BAKER & I | IN COLLABORATION WITH GUMONMYSHOE.COM 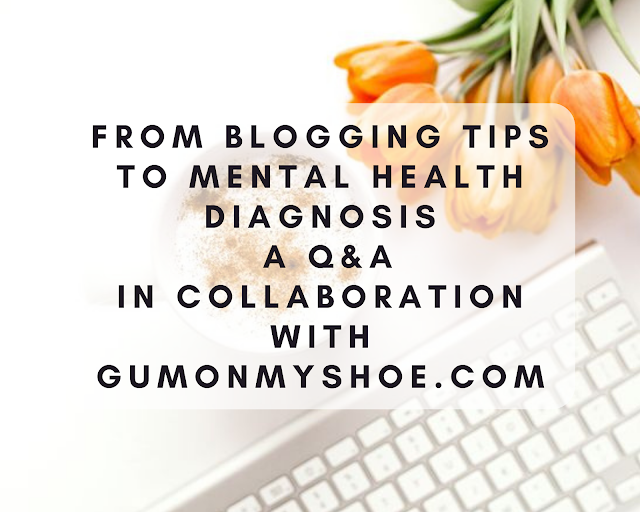 You can read Martin’s answers over on: www.gumonmyshoe.com

So a while ago I asked you all to send in questions you’d like to ask me and one of my best friends and fellow blogger, Martin Baker. Of course I was bombarded and so I had to work really hard to whittle them down to the following questions…

Do you feel under pressure to keep going with your blog?

I used to. I think there was a point where I was really blogging for the sake of others… I recognised that I was maintaining it purely because I liked the idea of it helping others. In seeing that my recovery was giving people hope, encouraging them to reach out for help and support, and enabling them to feel less alone, I felt that I couldn’t stop blogging because it would be taking that away from them.

However, when I decided to close I’m NOT Disordered down in 2014, I found myself truly missing it. I was finally recognising that, actually, I – and my mental health in particular – were massively benefiting from blogging. In ending my blog, I struggled to really process my thoughts and feelings and to better understand my decisions, and the loss of the ability to do this meant that I became unsafe again and started to really struggle. That experience – of not blogging – has meant that I now blog completely for me but balance that with still considering how my readers would feel or think of the content I produce. And I really hope that shows. 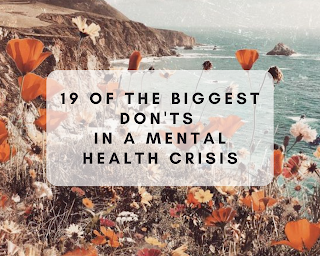 When I first created I’m NOT Disordered in 2013, I did so with the idea that it would be a brilliant way to document my mental health recovery journey and to off-load my thoughts, feelings, and everything that was going on in the psychiatric hospital I was an inpatient of. So it wasn’t until the audience numbers began to grow that I started to realise my blog could be a great platform of opportunity to share advice I might have gained along my journey. Advice on lessons which I had learnt the hard way and I hoped that in sharing them, readers could escape going through those same difficult and challenging experiences. I thought that having the ability to provide advice that might actually help others as a result of the hardships I had gone through, would make all of those horrible moments somewhat worthwhile. So, I present to you now, one of the largest advice posts in the nine-year history of I’m NOT Disordered…

LESSONS LEARNT FROM I'M NOT DISORDERED'S FIRST POSTS | MARKING EIGHT YEARS SINCE BEING SECTIONED FOR 2.5 YEARS Earlier this month (July 17th), it was eight years to the date of me being sectioned and beginning a two-and-a-half-year long admission in a psychiatric hospital which specialised in Personality Disorders...

For the three years previously to that admission, I’d been in and out of both psychiatric and medical hospitals because my local NHS mental health Trust had no services specifically for someone with a Personality Disorder diagnosis. The lack of understanding from the professionals who – in my opinion – should have actually been the most knowledgeable people in providing help and support, contributed to a number of other reasons why I had made two suicide attempts and self harmed on a number of occasions. The lack of services in my locality was also a reasons why, when I ended up on life support after a third suicide attempt, the professionals made the decision to admit me to a private hospital over 100 miles away from home, where the ‘average length of admission, was 12 – 18 months.

After around six or seven months in the hospital, I had a really positive 1:1 with my Key Nurse and it felt like such a productive step toward recovery, that I decided I wanted to document it in some way. And so, I’m NOT Disordered was born and my blogging career began.

HOW I’M GETTING THROUGH A BROKEN WRIST, TIME IN HOSPITAL, & SURGERY Apologies for the gap between the last post and this, hopefully when you read this you’ll understand why that happened…

MANAGING THE RELUCTANCE TO EVEN GO TO HOSPITAL

You know, when my mental health was at its most poorly – when I was finding myself in hospitals two and three times a week – one key reason for me going there tended be that I had self-harmed (in a way which could have actually cost me my life, but it wasn’t always a suicide attempt) in response to auditory hallucinations. Then, when they were content with my actions and silenced, I didn’t want to die or experience pain in any way, so I would seek medical attention for whatever I had done.

But, the professionals attitude changed toward me when they couldn’t understand the power of the hallucinations, and in their eyes; I was just wasting their time and resources. From then, I found myself being met with disdain and contempt from the moment I checked in at the A&E reception desk and that – I’d like to think, understandably – led to an intense reluctance to ever set foot in a hospital. It was like every time I entered the building, I could almost hear the eyes of all the hospital staff roll in their sockets, coupled with their overwhelming urge to comment; “it’s her again.”