I Put Some Thought Into The OD

So, I realise that the last blog post was basically just me telling you all what happened and in what order because I was too tired to think straight and I guess I hadn't even formed many thoughts that were worth blogging but I also realised how important it was to tell you all what happened so I wanted to a get a blog out as soon as poss.
I know it might seem overkill to do another post on the same thing but it's been such a massive event for me and I don't want people to misunderstand my reasoning and feelings.
I think I told the nurse what I'd done because I'd taken the pills for one of the voices and so it was me who wanted help, at first. And I think I begun fighting so hard on the Tuesday because I found out that I actually needed the treatment (not because the overdose was staggered, as I'd assumed) but because the paracetamol levels in my blood were dangerous. They told me it could kill me. And I realised I wanted that to happen. Although, a part of the entire situation felt like it was because of the way staff were reacting... I'm not blaming them, at all (in fact I'm quite grateful to them now) but sometimes a person can be banging their head and if staff just let them get on with it they'd stop of their own accord with no serious harm done. I realise it's a bit different and their 'duty of care' meant they couldn't let me get on with refusing treatment but I think the way they went about it initially (with the smart comments and pinning me down whilst sticking me with needles) just made me even more fed up and determined.
I've learnt a few things from the situation though. I learnt that I have three of the best friends I've ever had in my entire life; they each wrote me a note and had it sent up to the PICU and they bought me some lovely PJs. And then, as I was typing this I had a note pushed under my door from another girl saying that she's glad I'm alive and that when I smile it brightens everything up. It's so hard to take these lovely things from people because for so long I've been so sure that I didn't deserve love or to be cared about... And now, well I've come to realise that I've been through a hell of a lot and it's taken a lot of effort for me to be alive (although most of the effort was from others) and a bit of love is actually quite reassuring and comforting.
I also learnt that not all staff are the same, I once went AWOL from a psychiatric hospital back home and five hours later I got a call asking if I was going back any time soon.
I think it's understandable that I developed the belief that overdosing and not just telling someone I want to die, is what makes people sit up and realise it's bad. I think I've always been scared that I'd try to explain how I felt and they either wouldn't be able to help or they'd think they were helping but would make it worse. And I guess, with all the leave I had here and how I presented outwards, I was worried the staff thought I was much better than I actually was. So, in a way, I don't regret the overdose at the moment because it did the job; staff have sat up and been like 'shit; she's not ok.' They took it more than as seriously as I wanted them to and I've never felt so cared for in my life as I have done this past week. Not only did they try their best to save me medically but every time I pass a member of staff I'm asked if I'm ok. So today, I took a chance and rather than acting on my first instinct in just asking for PRN when I was struggling, I sat and had a 1:1 with a Nurse and ended up not needing meds. I guess, I just have to give them the chance to earn my trust.
In Reflection today, I made my first joke about the ventilator and it seemed to make something click and it was like all of a sudden everything that had happened smacked me in the face. I explained to the Nurse after, that I thought making fun of it would make it easier to speak about it but it didn't. And I came to realise that I had complied with the final plan of putting me to sleep, not because I was too tired to fight or had changed my mind, but because I'd realised I wasn't going to be able to die (they wouldn't let me) so the best that could come from the situation was a break. At that point, I chose to be unconscious rather than feel any more pain or have another bad thought.
I also realised that all of the fighting wasn't exactly 'suicidal' ... It wasn't so much "I want to die" it was more "I deserve a better life so let me end this shit one" so I think that's why I got so upset when the staff were stopping me because it felt as though they didn't think I deserved a better life and/or didn't believe my current one was crap enough to end. The Nurse today, has made me see that I can change things without killing myself though.
And to everyone who stuck it out and read this entire post, thank you!! 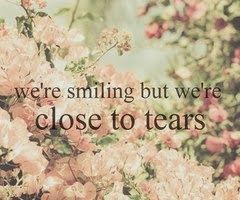