'I am not what happened to me. I am what I choose to become.'

Sunday, 9 March 2014
♪I heard you're going round, playing the victim now
But don't even begin feeling I'm the one to blame
'Cause you dug your own grave♪

I want to tell you all something; since I set this blog up it's been on my mind how I would go about posts that involve the mention of my 'trauma' and I decided I wasn't ready to discuss it publicly, and fortunately, everyone seems to have accepted that something has happened to me and that's that.
I want you all to know that the only reason now that I have not posted, and will never be able to post, what has happened to me is for legal reasons. I no longer worry what people will think of me when they hear what happened or even whether they'll believe me or not. For the entire time my 'trauma' was happening, I kept telling myself it wasn't. When I had nightmares or memories about it later on I would tell myself I had a sick imagination. I think this is what has stopped me from coming to terms with what happened to me because, for so long, I tried to convince myself it hadn't even happened. And then, when I began to tell people I realised people judge. It's not their fault; it just comes naturally. When you hear about an event between two people you automatically form an opinion on it. I felt that when I was telling people they were choosing a side to be on. Mine or his. And they'd form an opinion on my reactions to what was happening to me. I felt judged at a time in my life when I most needed the exact opposite.
The legal reasons that stop me from telling the world what happened to me are that the other person involved, won't admit to it. He lies. To himself. To the Police. To his family. To his colleagues. And finally, this is making me angry. What right does he have to deny this ever happened? Who is he to claim innocence?! I think it's pissing me off so much because I can see now, the effect that the 'trauma' has had on my life. The devastation it has caused. I could so easily be dead by now, but because of my many people, I'm not. And it is still so bloody painful to be alive, to keep breathing. I don't want people to think that because I'm doing so well everything is good and all is fine. It isn't. I no longer want to die but my heart still hurts. And my head is still full. I'm just managing it a lot better. But that doesn't take away what he did to me. Nothing ever will. So sorry I'm a little bitter that he has had a promotion, still has his entire family and God knows what else, whilst I've been trying to kill myself.
I think, a part of me is offended too. As though I meant even less to him than I thought I had. I'm not even worth admitting to. I try to remind myself, constantly, that he knows it happened. That he can't forget it, or block it out - I should know. I'm angry though, because he should be being punished for what he has done and he isn't. I am. I'm punishing myself because someone has to be sorry for it and he refuses to take the blame, so these past seven years; I have took it. Not any more, though. 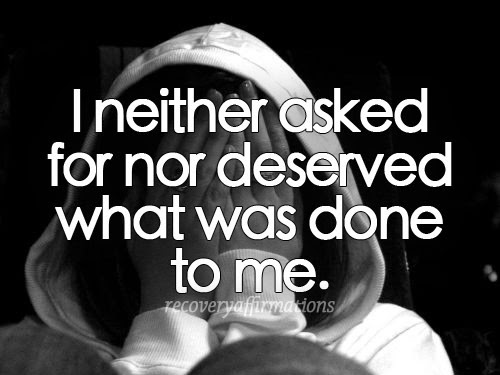 The entire 'trauma' wasn't your typical black and white one that you might assume if you heard it phrased briefly. There were a lot of confusing feelings involved which, I think, is why it's taken me so long to write a post like this and to actually believe it; I have had to sort out the mess of feelings inside of me. I've straightened them out and put them in order so I can deal with each one. Part of this, means I'm currently working with staff to re-visit the place where the 'trauma' took place. Hopefully that little trip and some deep, upsetting Psychology sessions are now all that I need to close the wound that has been open and bleeding for far too long.
﻿
'Getting over a painful experience is much like crossing the monkey bars. You have to let go at some point in order to move forward/' - C.S. Lewis
Labels: future, help, memories, rant, support, trauma
SHARE:
Newer Post Older Post
Home