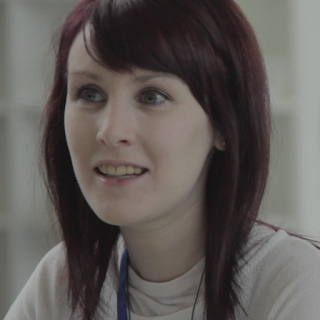 Q1. What is the first thing you would like people to know about you?
The first thing I would like people to know about me is that I am very, very quiet at first. It is not me being rude or arrogant, I would hate for anyone to think that about me, it is my anxiety from my Borderline Personality Disorder that cripples me, but then once you get to know me and I am comfortable, I can be quite lively, hyper and quirky!


Q2. Was it difficult to accept that you had no control over this on the documentary?
Not really. All the time whilst filming the documentary, I felt in control because I only said what I wanted to say. I was as open as I wanted to be so I felt in control. The crew were so lovely and made me feel at ease, so I felt very comfortable in opening up. During filming, I never felt that I was not in control which was a really good thing for me.

Q3. Which other aspects of the programme did you struggle having no control over?
I had no control over the editing process. So much was filmed - there was literally about four months worth of filming which had to be cut and edited down into less than an hour for the programme, so a lot of the filming material had to be cut out, which was such a shame because what was filmed was all really good material. I wish it could have been a series rather than a one-off documentary because of how much was cut out, it seems a waste not to use all of the material that was filmed. Some of what was in the programme I would rather hadn’t been in and some of what was left out I would have liked it to be in the programme!


Q7. What were your thoughts on the title of the programme?
I wasn’t enamoured on the title to be honest. It seemed to take forever for the title to be chosen. It went back and forth: a title was chosen, Channel 4 didn’t like it, so it came back and another title had to be thought of! The first serious title was ‘Mad Like Me’ and I really liked that but someone thought it was too discriminative so it was changed again to the final title of ‘On the Edge and Online’. They wanted to include something in the title about the fact that the participants of the documentary had mental health issues and communicated with each other online. I don’t think it was as catchy as ‘Mad Like Me’, which is the title I preferred.


Q8. What did you think of the other participants?
I ‘met’ the other participants online via something called ‘Vidyo’ which was basically like Skype but was set up especially for this programme. We were able to chat and it was amazing. There was no awkwardness and we seemed to understand each other from the very start. I ‘met’ Danny, Daisy and Louise and they were all lovely, but Danny, Daisy and I seemed to gel really well and I actually got to meet them in real life during a ‘Fixers’ event in London a few months ago. It was so wonderful to actually meet them in person and it was as if we had been friends for ever. We were really rooting for each other and wanted the best for one another which is such a wonderful feeling. We understood what the other was going through and there was so much unspoken empathy which was a lovely thing. Danny was so empathetic and also incredibly encouraging which was fantastic. We bounced off of each other with our achievements, for example when one of us achieved something, the other would feel so upbeat about going out to achieve something, it was an amazing bond. Daisy was just gorgeous; she is so lively and bubbly with the most beautiful personality. Her smile is contagious and her laugh is infectious, she’s so wonderful.


Q9.What did you think of the overall finished result? Did you feel that important parts were cut out?
I really liked the overall finished result, but yes, unfortunately, a lot of important parts were cut out. Filming was carried out between September and December, so all of those months of filming had to be cut down into less than an hour. I had been filmed during a driving lesson, singing in choir during a church service, going down to visit university, going for a walk, spending time with my pets, going for a blood test, calculating my BMI, messing around having a laugh with my mum, reading from my blog and writing my blog, and all of these important parts were cut out. I would love it to have been a series rather than a one off documentary then all of these parts could have been included.


Q10.In the documentary, you applied for University; what would you like to study?
I have got a place to study Spanish and English Literature at Cardiff University.


Q12. Have you watched any other documentaries around mental health?
I have a great interest in mental health documentaries, so if I hear about one, then I will watch it. There don’t seem to have been that many on recently. It is not a hugely popular subject for documentaries, but there are more nowadays than there were years ago I think.


Q13. What do you think of such programmes?
I am really interested in such programmes, to see how they are filmed and to see what perspective they take. More than often the media sensationalise programmes such as mental health documentaries and make the story different from what is real life just to get a dramatised story so that people will watch the programme. I don’t like it when that happens because some people who will watch the programme will just take it as face value and believe wrong things about mental health.


Q15. At the end of the programme it said that your wait continued to drop and you were hospitalized, where are you now in terms of your recovery?

My weight dropped right down to four and a half stone and apparently I was very close to death, but I was pretty out of it, so perhaps I didn’t realise, or didn’t care. I went through the refeeding process again which took a few months in hospital, and then I was discharged but was kept under the home treatment team for a few weeks at home. This means nurses coming to my home every other day just to check on how I was doing. Now in terms of my recovery, I am physically a bit better because my weight has increased slightly, but my mind is in turmoil because my BPD is quite bad at the moment, as is my agoraphobia because I am housebound.