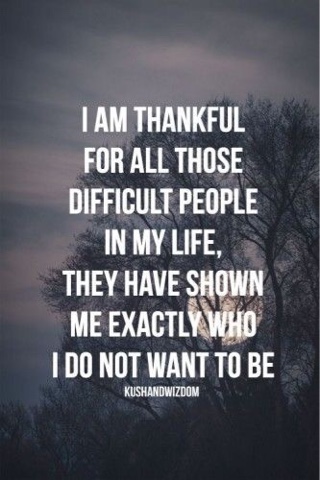 Blogging, no matter which area you choose to blog about, will attract trolls. Anyone with a social media account is vulnerable to trolling in this day and age, and I find that extremely sad. People should be able to post tweets of their likes and dislikes without fear of retribution, bullying and trolling.
I was first bullied in Primary School for the mere and pathetic fact, that I had an usual surname (I grew up with my father's surname). Like most bullying at that age, it had little impact and affect on me.
High School, was a different story. The first bullying began in year 9 (aged 12), when a boy I liked stopping liking me - typical twelve year old troubles! One day I was popular and the next I was sad and my friends melted away in the same way my happiness had. 'Friends' in High School are fickle. As my behaviour deteriorated I 'made myself' even more isolated. Once there was an awful supply teacher and the most popular girl in school asked me to 'go to town' on him. Usually, other pupils would mutter for me to 'shut up' or roll their eyes to their friends hissing 'for God's sake' or 'here we go again.' But I couldn't stop. Because if I stopped drawing attention to myself, then it'd mean having to accept that I would then be doing absolutely nothing to help people realise that I was being hurt. But neither could I tell people that this was why I was acting out, and so I accepted the bullying and smart-ass comments. Even when the online bullies weren't bothered enough to hide behind their keyboards, they knew I was so weak that telling me they were the girls I hung out with at school would make no difference to any possible retribution. The only reason they were told off at school was because my mum asked why I was crying.
And the bullying made me even more vulnerable than the abuse already had. During my A Levels, if I saw a group of girls glance at me whilst laughing then they were saying something mean about me. I held the 'they're popular and I'm not' belief for a lot longer than those who have actually grown up.

My eventual level of confidence at the moment is largely due to my age in that, if I feel like there's a group of teenagerslaughing at me whilst I'm out then I reassure myself that they're younger and remind myself of the amazing comments from my readers. I remind myself that I'm a blogger. And I'm proud. I'm proud of I'm NOT Disordered and it's many readers.


"I really don't deal well with negativity, it's why I've never published any video/audio clips/blogs"

People will think all sorts of you no matter what you do, and what I've learnt over the years is to take away their power to destroy you. If I could give you a step-by-step guide on how to do this, I would post it in a heartbeat. But I think it took a lot of different things to make this possible in my own life. And I believe it's one of those things that's individual to each person; it'll take a different combination of things to enable you to not be over-powered by the opinions of others. For me, my blog's success is what I'd say if I had to put my finger on one particular reason. Mental health, abuse, self-harm and various complicated feelings, thoughts, and emotions have filled my life up for a long time and I couldn't tell you when I was last this proud of something I had achieved as I am with I'm NOT Disordered. The thing is, it's more than just a popular blog, it's who it means I am to have achieved this; hardworking, determined, passionate, dedicated, a good writer and perhaps even - dare I say it - interesting. Here's the thing, I'm not saying these because im big-headed. I'm saying them because there's evidence. Evidence I can't deny. I have over 100,000 views. And you don't get that unless you are all of the skills I listed.

So trolls? I just... I don't get it. Why be nasty to a person who is doing no harm? There are so many people on the internet who express their views in an impolite way. Or say things purely to cause trouble. Negative comments towards these people could perhaps be understood but against girls blogging about their favourite lippie? Come on. I once had a comment that read 'get a job and stop making a career out of being poorly.' Among the many things that this comment is, it's very stupid. If you have a career, why do you need a job? Encouraging me to make a fourth attempt on my life? I just don't understand what people who write these, can gain from this... Ironic that those 'brave' enough to express such a thought are too cowardly to leave their name. Because they know they'll get
shit from the many people who disagree. And they know that what they're doing is wrong so they're
avoiding getting into trouble by posting 'anonymous.'
It was sad that in Story Camp when discussing what you should do in preparation for starting a blog, they had to include preparing yourself for trolling. It's a true fact but it's saddening that this is the case in our day and age.
Hats off to all those who continue blogging or whatever it is you're doing, in the face of trolls. You have the support of millions. And your trolls? Well no one supports them!