Thursday, 17 September 2015
I'd love to know if there are any mental health service users out there who haven't heard of having a 'safe place' from absolutely any professional. So please, if you're one of them - comment below!

I've been working with mental health services now for over 6 years so forgive me for not being able to recall when a 'safe place' was first mentioned to me. Off the top of my head, I'd say it was on my third hospital admission when I was kept on a Pyschiatric Intensive Care Unit for five months. When it was decided to transfer me to a usual ward, I began seeing my first Psychologist. If I recall correctly, the first mention of having a 'safe place' was during one of the many sessions in which I walked out of the room without completing the session.
The many times since then, I have knocked the idea of a 'safe place' without giving it much thought.
I think it's fair to say that this happens on many occasions with a million different things in life e.g. stating that you don't like a food when you haven't even tried it. I'm not saying this is the best comparison, but it is a more understandable situation to the average lay person reading this.
It was on my last hospital admission (when I began this blog) that a 'safe place' was most often discussed.
For those who don't know, the idea of a 'safe place' is to think of a place which makes you feel happy and safe. It is supposed to be used when you are struggling mentally and are perhaps triggered and feel as though your mind is overtaken by thoughts of what has been done to you and the hurt you have suffered. Also, perhaps, when you feel that you should be inflicting pain upon yourself in order to cope with such memories and emotions. And so, to help you to feel safe, you should invisiage a 'safe place.'
Before very recently, I was adamant that I had no safe place. The thing is that when asked to think of one, the examples professionals gave me to help inspire me to decide upon my 'safe place,' were beaches, a desert island, your childhood home or absolutely anywhere that has given you happy memories.
I could have named a hundred places a few years ago, but each of them have become tainted by bad memories. I used to love the beach. And then I used to go there when I was struggling and that led to new memories of self-harming in the dunes and having blue flashing lights from police cars come looking for me. I had an amazing childhood but the home that I spent years in was tainted by overdosing in it, cutting in it and being carried from it by six police after being sectioned in the living room. Everywhere I'd ever had good memories had become tainted during my years of poor mental health.
It is with my current therapist from the Personality Disorder Hub that I have finally found my safe place... Oh! And with the help of Pinterest. Who'd have thought it?! Something such as Pinterest helping with such an important aspect of a person's life. I think it's common for most Pinterest users to have a board for home decor inspiration but I never imagined that I'd find my safe place through putting one together.
There was this one photo that I pinned and something about it stuck. So that when, in therapy not so long ago, my therapist told me that my 'safe place' didn't have to be somewhere I'd been, somewhere I'd heard of or somewhere I'd like to go. It didn't have to exist on a map. Or in a memory. I could imagine it. I could invent it. It could be how I liked it. Just like my future home that I was imagining as a result of lots of other pinned images. It's natural to have hopes and dreams for the future, to have something to aspire to in life. I can imagine how important and publicised I'd like my blog to be; the dreams I have for it and the resulting affect that I dream for it to have on my life.
It was a particular image that I could build a dream around. I showed my therapist the photo and found that answering her questions regarding my imagination around the photo, strangely easy and automatic. 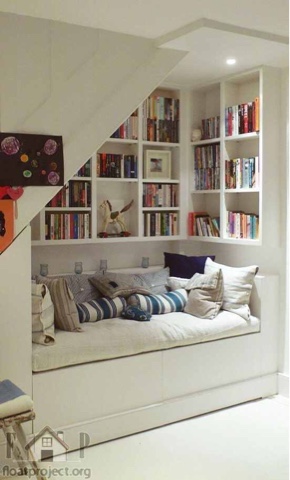 Q1: what does it feel like?
It's comfty and soft with the pillows and cushioning.
Q2: what can you hear?
Dolly talking and the mister cooking.
Q3: What can you smell?
A Christmassy candle like cinnamon and pine and the cookies that the husband is cooking.
Q4: what are you doing?
Reading a good book, talking to Dolly and laughing when my husband keeps shouting out in exclamation at the many mistakes he's making!

And just like that, I have a safe place. A place to put myself in order to avoid hurting myself. In order to avoid making myself unsafe.
Haven't got a safe place? Don't think you'll ever find one?
Don't give up. There's one for everyone. And I hope I've shown that safe places can be found in the most unlikely of places, so keep looking.
Labels: achieve, achievement, advice, changes, coping, happiness, help, information, mental health, positives, safe place, therapy, visualisation
SHARE:
Newer Post Older Post
Home