Can being treat for an overdose do more harm?

Saturday, 5 December 2015
This title will no doubt cause a knee-jerk response of 'no!' And possibly a few 'how could she even ask?!' But stay with me guys...
When I first got poorly (mentally), everyone was concerned. The first two times I overdosed, I was sectioned. The second, in a dramatic fashion that involved six police, leg restraints and sedation. People were worried. Scared. They cared.
I couldn't pin point exactly when that stopped happening, but I'd guess that it was probably around the tenth or fifteenth overdose (my notes show I've taken over 70 since 2009). After ruling out psychosis, inpatient mental health cared less. After causing scene after scene in A&E, hospital staff cared less. After going AWOL every chance I got, police cared less. I understood. I wasn't a nice person during those years. I didn't understand what was happening to me so, because I couldn't explain why I'd do the things I'd do, I allowed professionals to assume. And the majority of assumptions were that I did what I did for attention. But looking back, yes. Yes, I wanted attention. I wanted people to pay attention to my hurt and my anger and realise it wasn't aimed at them. I wanted someone - anyone, to pay attention to what had happened to me. But my feelings around my trauma: that I was to blame, was intensified by the new attitude of professionals. I felt that I deserved to be treat that way and to punish myself, I hurt myself. It was a hellish cycle. I can't help but wonder whether if staff had continued to treat me with the same original care and attitude, if the self-harm would have continued for so long and escalated to the point it did...
The reason this is on my mind?
Back in September, my psychosis escalated and I took an overdose. A senior Consultant in A&E became involved when I was struggling to accept help. He was abrupt and cold and although it put me on edge, I understood it was probably his demeanour and had nothing to do with his attitude towards mental health or what I'd done. When the little smart arse remarks began, I started to doubt myself. When it got to the point that I found myself wanting to be out of the hospital in order to be away from him, I knew he'd made things worse. And after restraining me so hard that he left fingerprint bruises and then slapping a Doctor on the back for 'filling my head with lies' I really... Lost my shit! In restraint, I was close to kicking out. When he tried to enter my room, after, I kept the door shut. I then requested that he not return to my room. And when he ignored my request, I confronted him about his attitude, comments and hitting the other doctor and was surprised that he admitted to everything. In front of a healthcare assistant. I cried because I felt that the feelings of uncontrollable aggression and anger were part of the Old Aimee. I'd always told myself that even if I was still self-harming, at least I wasn't treating professionals the way I used to. I was sad to feel that this one Doctor had set me back.
If I'd had the Consultant who took over in the morning that entire time, I'm sure that things would've gone differently.
And this, is my point; if professionals treat you so badly when all you need is their help and support then how could this possibly aid recovery? For me, each incident with staff was just added to my collection of bad memories that rapidly grew after each hospitalisation.
It's no secret that mental health service users have sometimes been known to self harm or succeed in suicide because of the way they have been treat by professionals. So how can you be sure that admitting someone to hospital or having police involvement will not worsen the persons mental health? 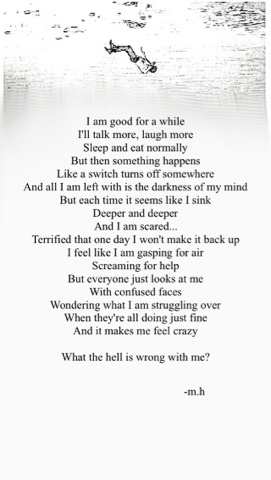