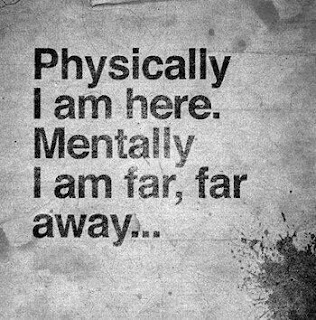 I wrote a post about disassociation four years ago (which you can read here) while I was in a psychiatric hospital but I think it’s a little out of date and there’s been A LOT of new readers since then who probably won’t be going back through all of the 802 posts on I’m NOT Disordered! I also experienced an episode of disassociation recently when I ran away from hospital and it has been the inspiration for this post.


I had been taken to A&E (by Ambulance) after self-harming and was told I’d need stitches but before they had the chance to do them, I ran away. The Police found me on a road in a nearby town and I had no clue how I’d gotten there. The Police called an Ambulance to take me back to Hospital and I was sitting on a seat in the back of it with the Paramedic and she asked how I’d come to end up where I was found and I told her I had no clue. We laughed that it was probably safe to say I hadn’t been kidnapped and let go but I knew that it was actually serious. I explained that I used to disassociate a lot and she asked what had brought it on and I told her I had been abused. She said I didn’t have to talk about it, but I explained that I wanted her to understand – or at least have a better understanding – why these things were happening. And when I told her how scary it was, she said something wrong; she said, “it must be hard because you can control your self-harm, but you can’t control what you do when you disassociate.” It wasn’t her fault that she got it wrong; mental health is such a hard-to-understand topic that it tends to only happen when you, yourself, experience it. But rather than react the way I used to – by shouting at her and telling her she knew nothing. I corrected her “it’s not about control; it’s about not being conscious of it happening.” She understood and agreed but no matter how I tried to explain it in the back of that ambulance, how could she possibly understand something that even I struggle to get my head around?! But maybe a blog post would be enough of an opportunity to explain this and to explain it to as many people as possible?

When I was being abused, I would disassociate. I don’t often talk about the interview I had with the Police over this but I kind of need to now… They asked me if there was anything physically noticeable that I could remember that would prove it had happened and I couldn’t answer. Not because I was lying. Not because I wasn’t sure. Because I honestly didn’t know. You see, when I look back and see it happening… it wasn’t happening to me. It happened to another Aimee. An Aimee that is a part of me but also apart from me. When I look back, I’m watching it happen from the corner of the room on the ceiling. And sometimes this means that my ‘view’ is obstructed by moving bodies so I’m sorry – believe me, I’m sorry - that I don’t remember any freckles or moles!


Using that coping mechanism of disassociating, has had two hugely negative impacts on my life:


1.      Doctors have said that one reason why I can’t regulate my emotions and become overwhelmed by them, is that I disassociated aged 15 and so a part of me is stuck at that age. And with that level of emotion regulation.

2.      Having disassociation work so well in helping me to cope with the abuse has meant that my brain now looks to it in times of crisis and trauma and, in the long-term, it’s an unhelpful coping mechanism. Disassociating prevents you from properly dealing with what has happened and so the memories – inevitably – sneak back up on you… Usually, at the most inappropriate of times. And it’s probably harder to cope with than if you’d been able to tackle it when it first happened.


For me, disassociating doesn’t creep up on me like fog… there are no ‘early warning signs’ – no matter how many times professionals ask for them. Some might say that knowing what happens that will result in me disassociating counts as an early warning sign, but I’d disagree. An early warning sign is like having a headache before finding a brain tumor… Or it being really windy before a tornado! Yes, those are extremes but hopefully they give a better idea of what I mean that it would have done if I’d used small, insufficient examples. Having memories of the abuse triggered, feeling overwhelmed, experiencing stress, my hallucinations worsening are all things that could cause me to disassociate but they aren’t warning signs that it’s going to happen. Disassociation comes from nowhere. Like, falling asleep on the train and you wake up to find you’re at a completely different station. You weren’t conscious of moving. You weren’t aware that your body was travelling further away from where it should be. You didn’t know what you’d slept through – what you’d missed. You didn’t see all the beautiful scenery the train has gone through. You didn’t hear the staff announcing the next stop. You didn’t smell the food from the buffet cart. And you didn’t feel the tremors when the train switched tracks.


I think that the scariest thing is not being able to control any of it. I can’t control when it happens. I can’t control how long it lasts. And the worst part; I can’t even control what I do during the time. A Psychiatrist once told me that it was my body’s way of saying that it had had enough and that it was like having an internal panic attack in your brain because the difference between my falling-asleep-on-the-train analogy and disassociating is that others know when you’re sleeping. It’s very possible for no one to be aware of you being in a dissociative state. Unless you’re acting really odd… Like this one time when I was searching for my PE kit in my Hospital bedroom!

Losing control and not knowing when I’m about to disassociate means that I can’t really advise any way of coping with it, other than getting help at the earliest opportunity.
Labels: abuse, analogy, coping, disassociate, disassociation, memories, mental health
SHARE:
Newer Post Older Post
Home