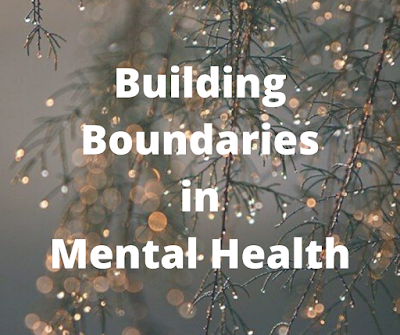 “We need to have a talk on the subject of what's yours and what's mine.”
― Stieg Larsson, The Girl with the Dragon Tattoo


So, I had Martin Baker (of gumonmyshoe.com) over to my house and we got talking about people who message people that they’re feeling suicidal and it got us onto talking about boundaries and I realized I have a lot to say on the subject; so here’s a post on the topic!


I also talked to my Richmond Fellowship support worker (from their Tyneside floating support service) about how I felt that I’m not the right person for this person to be texting and telling that they feel suicidal. This topic also came up a little while ago because obviously, writing such a huge blog about mental health I do receive emails daily from people saying similar things about feeling suicidal and struggling with their mental health; regardless of my blog’s disclaimer!


At first, it was overwhelming and upsetting to hear people saying such negative things partly made me feel reassured that I wasn’t alone, but mostly made me feel hopeless because there’s other people feeling the way I do. Then, after a while, I started to view it as… heartwarming, maybe? That people feel and think that I’m a good person to talk to about their mental health and that they trust me with the most vulnerable side of themselves. These days? Well, I still see all these sides to it, but I also think that it’s important to stress that I’m just not the ‘right’ person to talk to. Some may argue and say that they’d rather speak to someone who understands than a professional who thinks they do because they have a degree. I get that. But you have to consider how it would be to tell someone like me that you feel suicidal and to then go ahead and do something…?! I mean, there’s only so much I can do… like I said; I’m not the right person!


I was telling my Richmond Fellowship support worker about this time when I was in a psychiatric hospital and I’d argued with one of the other inpatients, then I was walking past her room when I heard a funny noise from inside of it. I remember thinking to myself ‘if I keep walking and something’s happened then I’ll regret it and hold myself responsible.’ When I looked through the window in her bedroom door I saw her with a ligature around her neck; her lips were blue, face swollen and the door was locked - it didn’t stop me trying to kick it in with my slipper clad feet though! I screamed for the staff and it turned out I’d been just in time because she’d stopped breathing and had to be resuscitated! Afterwards, the Ward Manager took me into her office and asked how I was doing after seeing something like that. That was over five years ago, and I still remember every detail.


I think that the instinctive feeling of ‘shit if I don’t do this and something happens then it’s on me’ has stayed with me ever since then because it’s a huge reason why I want to build these boundaries in asking people not to confide in me when they’re feeling suicidal – and it is particularly when someone is feeling that way because if a person is purely struggling then I don’t feel so powerless. And that’s the key feeling in this type of situation; feeling totally and completely powerless and useless. I mean, even where it’s not a complete stranger; what exactly do you do? Short of ringing the Police (if you know their address/where they are)? And it’s so difficult to say because I worry that I sound really selfish… I mean, should I worry about how I’ll feel when someone else is feeling so terrible that they’d rather be dead?! It feeds into that belief that some people hold that suicide is a selfish act but having actually felt suicidal, I know that a huge motivator for that feeling can be the conviction that your loved ones would be better off without you. To me, that’s the most unselfish a person can be!


I sometimes feel that if I’m pouring my heart out and telling a professional my life story and all my deepest and darkest thoughts, feelings, and secrets, then I should get something in return. Almost as though I’m owed something or have the right to know something about the professional in return for them knowing so much about me. Of course, this isn’t right; it’s meant to be that way round. The professional is meant to remain… professional. Aloof. Removed. Uninvolved. I guess it makes sense when you consider the amount of service users (no matter what the service) they see; if they were to become personally invested in each one then they’d be left with very little privacy. I guess there’s also the fear that being aware of a professional having their own mental health difficulties or struggles would detrimentally impact the person’s trust and the level of the service user confiding in the professional. I mean, would you tell someone who was already struggling with their mental health that you were feeling suicidal or that you’d gone through a trauma?