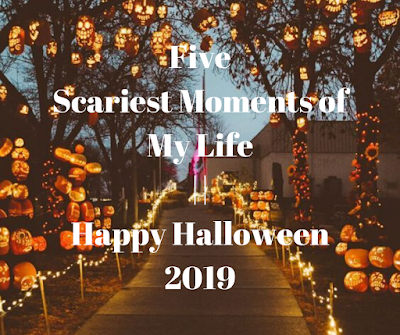 “You gain strength, courage, and confidence by every experience in which you really stop to look fear in the face. You are able to say to yourself, ‘I lived through this horror. I can take the next thing that comes along”

Halloween is all about making people jump in shock and scaring people half to death; but no one ever really uses the opportunity to talk about how fear can be positive and beneficial too! Being afraid can be a natural reaction to a situation – think along the lines of ‘fight or flight.’ So, for this reason, I didn’t want to use this post to only discuss the really negative parts of my life; I also wanted to talk about how positive fear has been for me sometimes… How it has often resulted in something positive:

Apparently, my Mum was talking to a Nurse and she noticed my lips had gone blue… I was in respiratory arrest – I’d stopped breathing and it took two shots of adrenaline to wake me up. All I remember was seeing this white light. My entire vision was taken up by this white light and in the very middle, in the distance, was the brightest and there was something inside of me telling me that I had to get to it. Other than that instinct, my head was full of an overwhelming sense of peace and content. It was as though everything in my life was ok. Everything was ‘right’, and it was all how it was meant to be.


Confused? Wondering what was scary about when I stopped breathing? It was the aftermath because when I woke up, I wasn’t grateful. I wasn’t thankful to the Doctors. That sounds terrible; but it’s the only way I can get across just how amazing this feeling was; and I need you to understand that so that you can appreciate why it promoted my feelings of suicidality. The feeling of utter peace really encouraged me when I felt suicidal and reassured me that committing suicide wasn’t something to be feared or talked out of. It wasn’t something that professionals should be stopping me from doing. My respiratory arrest led me to believe that after all I’d been through; I deserved that peace.


These days, the thing that’s changed is that I no longer feel suicidal; I’m still unafraid of dying and this fact is terrifying because it makes me wonder if it’s impacted my survival skills and if it means that, should my mental health deteriorate, I could ‘easily’ become suicidal again.

Ten days before my first overdose, I had started hallucinating. The first thing the auditory hallucination (in the form of a man’s voice) said to me was ‘you’re useless; kill yourself.’ I was so scared that I’d ‘gone crazy’ that I didn’t tell anyone. I didn’t ask for help or try to get an explanation as to why I was hearing things because I was so afraid of what I’d be told. So instead, I did what the voice told me to, and I took an overdose whilst I was at School. When I passed out, my teachers called an Ambulance and I was taken to the nearest A&E where I was told that I needed blood tests four hours after I’d taken the tablets so as soon as I was left by myself in a room, I ran off. I remember almost making it to the local town centre when two Police Officers crowded me and took me back to hospital, where I heard them argue with the Nurses in A&E about how there were no hospital staff who could constantly watch me so the Police would have to step up and I was promptly detained under section 136 of the Mental Health Act.


I didn’t know what this meant and even when I had to undergo a Mental Health Act assessment with two Psychiatrists and a Social Worker, nothing was explained to me! And when I was properly sectioned under section 2 of the Mental Health Act, all I was told was that the hospital staff now had the power to stop me from leaving. When, after the overdose antidote treatment was complete, I was told that I wouldn’t be going home, I didn’t understand. I’d been told horror stories about psychiatric hospitals so actually being admitted to one was terrifying. I was so scared that I was about to be surrounded by people in straitjackets, talking to walls and being restrained and sedated by staff in white lab coats. Actually, it ended up being helpful because seeing all of these people ‘talking to themselves’ made me realize I wasn’t the only person hearing voices and this encouragement gave me the motivation to tell the Psychiatrist what I was experiencing. Doing this meant that the door was open for me to finally get the help that I desperately needed.

I’ve always said that I’d attribute my mental health recovery to four things and I’m NOT Disordered is one of them! I know how that sounds; to credit blogging as something that saved my life; I guess some people would say I’m a true product of my social media frenzied generation but it’s so much more than that!


After a difficult talk with my Named Nurse, during my long-term psychiatric hospital admission in Cygnet Hospital Bierley, when I agreed to start writing a little bit about the abuse every evening. It’d taken me over a year since being admitted to Cygnet to realize that telling the staff more about the horror that’d caused my mental health deterioration might help me to recover a little faster. This agreement, inspired me to start I’m NOT Disordered as a way to document my journey because I fully believed that writing these notes on the abuse, would be the catalyst for my mental health recovery and I wanted to have evidence of the changes as they happened.


I think that I was mostly afraid of letting out all of my deepest and darkest thoughts, feelings, and memories. Oddly, I wasn’t phased by them being on a very public platform; I hadn’t considered being judged and ridiculed for some of them, but I had considered that I already struggled with feelings of emptiness and I worried how I would feel once all of this was out of my head? I can easily look back and say that it was such a silly thought; but I know that, at the time, it was 100% a legit fear!


Looking back, I couldn’t be more grateful that I pushed through that fear and allowed I’m NOT Disordered to grow into the enormous success that it is. It’s taught me a valuable lesson about fear and that good can come from it.

When I was recently asked to speak at a World Mental Health Day event, I wrote a post about how I will always remember how nervous I had been before my first attempt at public speaking at an event. How I remember calling my Mum almost hysterical and telling her flatly that I couldn’t do it. I had convinced myself that I was incapable and – even with things in general – once I’ve convinced myself of something then that’s it!


I think a huge part of my fear came from the fact that even though I’m more than aware that I have a huge following on I’m NOT Disordered, when I write blog posts I don’t think about how many people might end up reading it.  I can’t. I mean, I think that if I were to keep that number in mind when I typed then my content would probably change, and I might not be so open and honest. So, giving a presentation or a speech, I actually get to see the number of people who are hearing it and even though – according to my Blogger stats – that number is always (by the events I’ve done so far, at least) a hell of a lower than those who read my blog; it’s still intimidating! Having your audience in front of you also means you can see any reactions via facial expressions and when someone looks horrified after stating that I’ve been on life support before, it can be really off-putting. Even, when they look amazed or impressed if I talk about how many readers I’m NOT Disordered has, it’s such a change from me having high privacy settings on my blog posts!


These days, I still get nervous and my hands sometimes still shake but I realize that if I want to help make changes in mental health, to the stigma surrounding it, and to have my blog expand, then public speaking will help those things. I used to worry that people would think I was a hypocrite for being willing to type posts for hundreds of people to read (my stats currently stand that I have over 1,000 readers a day) but reluctant to speak in front of 50 or 60 people. That worry went away when I realized that it was holding me back.

Death and loss – no matter who it is/was – can be scary. Taking Dolly to the Vets last October knowing that they were going to put her to sleep was probably the most scared I’ve ever been when it comes to pet-related instances.


You know, I’ve been able to talk about why I was scared in the previous four things but this one… it feels as though there were one million and one reasons why I was scared and yet none of them will come to the surface. The water is murky and they’re all lurking below it. I’m aware that they’re there but I can’t see them clearly enough to do anything about them.


I couldn’t decide whether I was more scared for Dolly or for the future. I hate the thought of animals being put to sleep – in any situation and circumstance – because they can’t talk; you’re doing what YOU think is best. They can’t say it’s what they want or tell you that you’re making a mistake. When Dolly passed away quicker than the Vet thought she would he reassured me that this meant she had been close to going anyway and that he felt we’d made the right decision but that’ll never be as good as if she’d been able to say that for herself.


I was also afraid of what might happen once she had gone. How would Pixie (my bunny) and I cope? What would we do without her?