THE IMPORTANCE OF VALIDATION IN MENTAL & PHYSICAL HEALTH 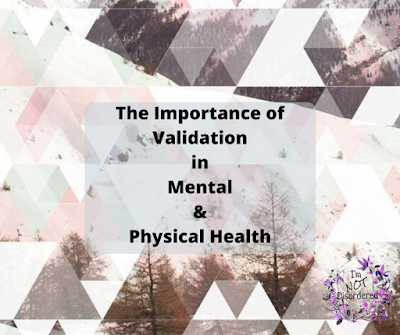 So, if you follow my Twitter you’ll have seen why this topic is so relevant in my life right now. So here’s why validation has had as great an impact on my mental and physical health as painkillers have(!)…

Back in late 2006, after the abuse began, I started having crippling tummy pains and was constantly being rushed to hospital for pain relief and tests but only on two occasions did they find something – cysts on my ovaries. I ended up having surgery one time to drain one of the cysts but for all of the times I was taken to hospital and they found nothing, I worried that soon the Doctors and Nurses would grow sick of me and that there could be one time when something was seriously wrong and they wouldn’t believe me. But the pain felt as real and as genuine as the keyboard feels while I type this.


Since my mental health has been completely stable after my medication increase earlier this year, I’ve noticed that I’m more in-tune with my body and physical health. I’ve occasionally had tummy pains still, but they’ve always found something; and I’ve actually been diagnosed with Poly-Cystic Ovaries. So, when I slipped on the ice on November 30th (this year), I thought straight away that my wrist was broken but when I was sitting in the Minor Injuries waiting room, I was so scared that my X Ray would come back normal that I worried what it would mean to be told that nothing was wrong and be left doubting myself and my instincts again. But instead, the Nurse came along and said that it was ‘no wonder’ I was in so much pain because I had a Buckle Break right the way through the Radius in my wrist. I remember thinking ‘and if the X-Ray had come back ok then my pain would have been disingenuous?!’ But I guess that’s why validation is so essential; because otherwise, there’s the danger that you feel as though no one believes you – that they think you’re lying.


The second physical drama I’ve had recently started on Boxing Day (again, this year!) when I tried to open a bottle of prosecco. I heard a crack and a twang and then all of a sudden, I couldn’t move my thumb! My first thought was that I’d dislocated it, so I went to Minor Injuries with my Mum and a Nurse glanced at it, X-Rayed it, and said it was fine and to put it in warm water and slowly start moving it! When I was a little bit hesitant with her reply because I really couldn’t move my thumb, a Doctor who was sat behind her glanced at my X-Ray on the computer screen, gave it the ‘ok’ and sent me off! Over the next two days I was in so much pain and still couldn’t move it, so I took a deep breath and went to Accident and Emergency. I was so terrified that they would turn around and say ‘well, you’ve been told it’s ok! Just go home and do what they told you!’ that I almost didn’t go. I’m so glad I ignored the first bit of advice and went anyway because once the Nurse called my name and I stood to follow him to the room, he stared at my thumb and his first words were “well that doesn’t look right, does it?!” and I can’t tell you the relief I felt. I think I actually breathed a sigh of relief to think ‘thank God; there’s someone else who thinks that there’s something wrong!’


He called a Plastic Surgeon and he did an actual, full-on examination of my thumb, the movement I had, the power I didn’t have, and the location of the pain before determining that I’d either injured the Ligaments or the Tendons. The Surgeon went to speak to the Senior Doctor and came back with an appointment for me in two days’ time at their trauma clinic, telling me to bring an overnight bag because they thought it likely I would need surgery. Not going to lie, I had a little cry! It was obviously partly in upset and fear at the thought of an operation but mostly, it was actually relief that they’d found something wrong – and that it was something they could fix!


I had been so hopeful that something was wrong that I genuinely worried it was a little bit of self-harm mentality! But I realized it was different because it wasn’t that I had brought the injury on myself – I hadn’t ‘wanted’ this (but whoever wants to self-harm?!)!


On Monday 30th December, I was told that had I followed the previous hospitals advice (about warm water) for much longer, then the mobility in my hand could’ve been seriously affected. I had surgery that day.


Another aspect of my life that validation has helped in has been my mental health because three years after the abuse, I started experiencing auditory hallucinations and made my first suicide attempt through an overdose in early 2009.


Validation became a controversial subject in my mental health care with half of professionals believing it shouldn’t be used in supporting me with the hallucinations and the other half thinking it was helpful. The latter were correct.


I remember when I was sectioned under section 136 of the Mental Health Act 1983 with a Police Officer in Accident and Emergency and I was hallucinating a rabbit on the floor under the plastic chair in the corner of the room. The Officer asked what was there and then promptly stood, lifted the chair, and stamped her big black boot on the rabbit. I knew that to her, it wasn’t there; and to her, it’d been a blank space but just that simple action that proved she believed it wasn’t blank for me, was so comforting. Before she’d done that, I’d been very uncooperative with the professionals in doing my Mental Health Act assessment and recommending medical treatment but after she did that, I felt so validated that I co-operated with them!


There was another time, when I was sectioned to the long-term psychiatric hospital, and I hallucinated rabbits all over my hospital room. I ran from it and was pretty hysterical in the corridor, refusing to go back into the room and crying uncontrollably. A member of staff offered to go into the room and said she’d rounded up the rabbits in a net and took them outside. When I went back in the room, they were gone. Another member of staff was angry with how the Nurse had responded and said that they worried validating the hallucinations was the   equivalent of ‘playing into them’ and the opposite of encouraging me to entertain the possibility that they were hallucinations. But validation doesn’t have to mean that you agree with the other person; it’s not about that; it’s more about simply acknowledging what that person is experiencing and that it is genuine.


It might be sad - to some people - that I put so much appreciation into external validation and that seeing it myself isn’t quite enough to make a real difference; but I think that like many things in my life, it all stems back to the abuse. When the abuse was happening, I couldn’t tell anyone for so many reasons, but one was that my abuser had convinced me that no one would believe me if I were to report it. Having that message drilled into your head over and over again and at your most vulnerable time, can easily turn it into the soundtrack of your mind and the catalyst for a lot of decisions.

Hopefully this post has  shown readers how important a very simple skill like  validation can be to a person in a time of need and hopefully it’ll have shown others who benefit from validation that they are not alone in this and should not be judged for it.
Labels: abuse, doctor, help, hospital, mental health. physical health, self-harm, support, validate, validation
SHARE:
Newer Post Older Post
Home