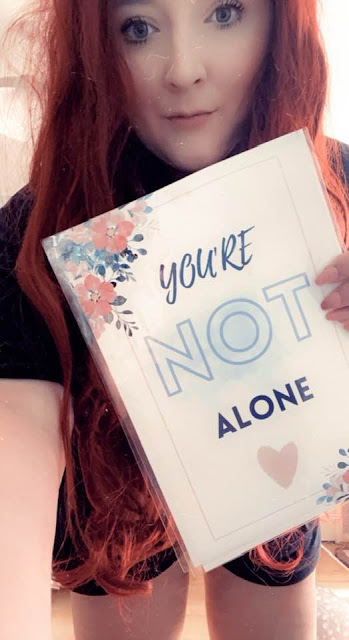 Welcome to Day Two of Mental Health Awareness Week, today I’m collaborating with the Design Parlour from Etsy UK to bring you something very special…

A few months ago, I was searching for gifts for two of my best friend’s Birthdays, and came across this personalised illustration from the Design Parlour: Birthday Gift for H
er Best Friend Birthday Gift Birthday | Etsy UK. And from there, Ciara (the Design Parlour’s owner) and I got talking and put together a collaboration piece (THE ULTIMATE BIRTHDAY GIFT GUIDE | IN COLLABORATION WITH ETSY | I'm NOT Disordered (imnotdisordered.co.uk)) and then – as with so many things in my blogging career – it snowballed into something so much bigger…

So, this post is inspired by our first print we’ll be selling only on the Design Parlour’s Etsy store, and in honour of MHAW, we’ve kept it connected to the ‘loneliness’ theme and will be donating 10% of sales to the mental health charity: Mind. Using the phrase ‘you are not alone’ inspired me to write this piece about how you can help and comfort someone who is feeling lonely…

Relate, but don’t start a competition

When someone you know or care about – or sometimes, even complete strangers – voices a thought, feeling, or experience that you can relate to in some way, it’s incredibly hard to resist saying “I understand.” It can even be difficult to stop yourself from explaining why you believe that you ‘understand’ what they’re going through. But it’s important to recognise that one of the biggest dangers in talking about your own experiences can be a sense of competition. It can leave the person comparing what you’ve been through with their own situation and feeling somewhat minimised and unimportant.

The first time I noticed a competitiveness in mental health, was after my second psychiatric hospital admission. Another inpatient I’d met in the Psychiatric Intensive Care Unit (PICU) kept in touch with me when I was discharged first and I quickly noticed that no matter what I told her, she had to almost always ‘one-up’ me on it. Like, if I needed a certain number of stitches after self-harming, she’d need more. Or if it took six Police to get me to hospital (true story!) then it would take seven to transfer her. That kind of thing.

Even though I was poorly, I felt conscious of what was happening, so there was no competition from my side of things. I mean, I always felt the notion that if anything, we should be supporting each other to stay safe and to engage with mental health services. And that remained when I went into the specialist psychiatric hospital where everyone had the same diagnosis of Borderline Personality Disorder (BPD) and I was surrounded by very unhealthy competitiveness.

The largest example of this that I refer to pretty often was when one of the girls (it was a female only ward) snuck a blade onto the ward and everyone (except me and the girl I was closest to) began passing it around! And they passed it on only after each person had used it.

The only reason it was eventually stopped was because staff finally noticed that even though the wounds were becoming worse and worse, they all seemed to be caused by the same instrument. So, we were all shut in the communal living room whilst the ward was searched from top to bottom and weren’t allowed back in our rooms until the person who snuck it in confessed to it. And I remember being so frustrated that regardless of the fact these girls knew the horrendous consequences of self-harming, they were still encouraging others to engage in the unhealthy coping mechanism.

The next instance of competition in that psychiatric hospital came after I managed to run away whilst on unescorted leave from the ward. I had called a taxi to be ready and waiting for me at the local shops and then I jumped over two fences into the grounds of the nursing home alongside us and went to the train station in the taxi. When the Police eventually found me in a nearby city, after making a suicide attempt, they took me to the medical hospital (an ambulance was going to take longer) on lights and sirens and my refusal to accept the lifesaving treatment resulted in me being put on life support.

When I finally got back to the psychiatric ward after a few days in the coma, the staff warned me against telling any of the girls the entire story because they said ‘no doubt’ one of them would try to copy. But the story came out and the next thing I knew several girls had tried to run off and the staff were installing a much higher fence in place of the one I’d jumped over. And initially, I actually felt really terrible for having such a negative influence on the people I had grown to call my friends. But after a while of kicking myself and being full of guilt, the staff talked to me and finally managed to help me see that there was only so much responsibility I could take for this. At the end of the day, the other inpatients were all adults who were capable of making the decision as to whether or not to copy. 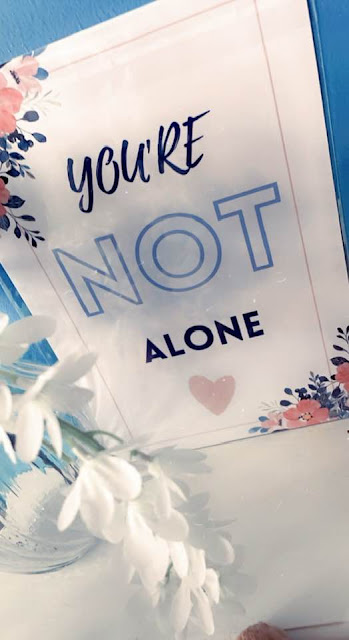 So, with competition being rife in the mental health world – despite the context/situation – it’s prudent that you consider how you word and phrase anything you’re saying in connection with the notion of how you feel you can relate to someone. I mean, if someone says they’re feeling suicidal, it may not be productive to say, “I felt like that before, but I didn’t try to kill myself.” However, what might be helpful, could be for you to say, “I completely appreciate how you feel; I was struggling once though, and I managed to get through it. So, let me be there to help you.”

I’ve spoken before about how I used to tolerate being called materialistic and superficial, but since doing Dialectical Behaviour Therapy (DBT), I’ve learnt the importance of being proud of whatever it is that helps your mental health and keeps you safe. I mean, two of my favourite DBT skills are around distraction and self-soothe – both of which, typically require some sort of object e.g., a book, a wordsearch, a blanket, a candle, or a bath etc. So, discovering that this widely practiced, and highly recommended Therapy encouraged the use of material objects, was really instrumental in helping me to lose the fear of talking about how beneficial such things are for me. And I’d like to think that in finding that confidence, maybe it’ll inspire others to take my advice when I list an object or activity as helpful and that they’ll then also find it useful.

So, I won’t be ashamed to say that I love receiving presents (I definitely love giving them more though!) because for me, it isn’t really about the actual object… I see it as an illustration that the person giving it to me really knows me well enough to be sure of what I would like as a gift. And, as someone who has struggled with recognising who I am as a person and being happy and accepting of who that person is, it means a lot to me to have another person join me in recognising who I am and being encouraging of me, my hobbies, and my favourite things. To me, giving me a gift is kind of like saying “I like who you are.” And that means more to me than whatever the present allows me to do.

With all of that in mind, I hope you can understand why I’m now going to recommend gifting someone who’s feeling lonely… 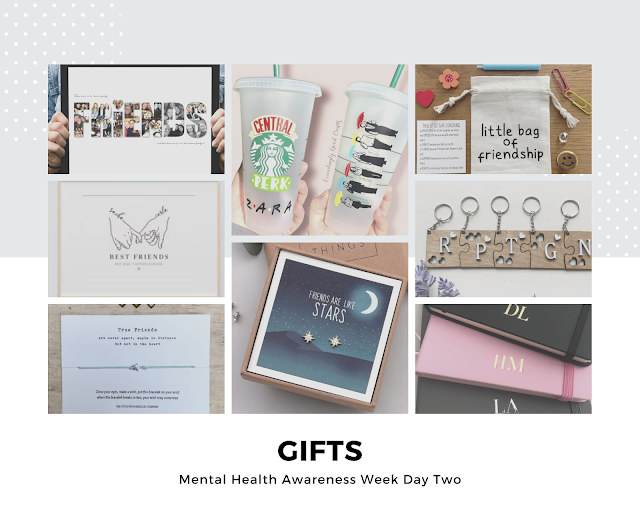 Validate, without endorsing or encouraging

This tip about validation is something that a lot of people might read and think ‘of course you should do that!’ But I’m pretty confident there are also people out there who either haven’t thought to do it, or who don’t realise how big of an impact it can actually have on someone who’s feeling lonely.

I don’t remember really hearing or understanding the word ‘validation’ until I was in the specialist psychiatric hospital where I underwent DBT for two and a half years. In Therapy – and even just being on a ward where the staff were specifically trained to help and support someone with a Personality Disorder diagnosis – I think I experienced the benefits of validation before I actually learnt how to do it and what it really meant.

It's kind of sad to think that I was in mental health services for three years before I ever felt validated by professionals. And that I had to go 127 miles away from home to experience that! Before that hospital, there were so many instances of professionals doubting just how poorly my mental health was. I mean, it was mostly that I was ‘attention seeking.’ The Police and psychiatric staff did the exact opposite of validating how I felt and what I was experiencing (in terms of the hallucinations). In fact, they made me question myself…

Something people don’t seem to recognise when there’s talk of hallucinations is just how disabling it can be in leaving the person questioning absolutely all of their five senses at any given time. I mean, there was a Butchers near my home and one time they had a person dressed as a cow on the side of the road to advertise and I just looked at my support worker and she read my mind and said, “yes, it’s really there, Aimee!” So, I was already doubting myself and the last thing I needed was for those who were meant to help and support me to do the same thing. And make it worse.

So, after three years of that, to then be in a hospital where literally all the staff were so much better, kinder, more understanding, and validating? It was a bit of a shock to the system! On the one hand that was really saddening because it showed me that all the professionals back home should have been treating me this way. And I found myself recognising my strength because I had somehow survived being doubted and having my integrity questioned by the very people who should have been doing the exact opposite! It meant that I was so grateful to the staff of the hospital for something which they just deemed to be a really basic standard of care.

The only tricky bit with validating the way someone is feeling, what they’re thinking and/or what they’re experiencing, is ensuring that you don’t encourage anything negative or unsafe. You can support and validate the person without promoting their struggle and contributing to them staying in that same ‘place.’

I hope this post has been helpful in providing advice on supporting someone to feel less alone, and please stick around for the rest of the Week and a whole new print being released on the 14th!