Wednesday, 13 November 2013
Today, NHS England's Medical Director launched plans to establish two-tier Accident and Emergency Services. The plan is to make some A&Es  a more specialised centre for the more seriously poorly whilst others are (in some ways) downgraded.
He commented that it was an 'illusion' to suppose all Hospitals were as good as each other.
Back home, in the community there were three A&Es... Let's call them A, B and C...
A would be the one I'd be taken to if I called an ambulance from my home or within my town. It was a 20minute drive in a car but about an hour on the bus.
B was a little further along the coast. It was a twenty minute drive and about the same if I took a bus there.
C was in the city centre. Another twenty minute drive but on the bus, it'd take just over an hour.
The things was, if I didn't require an ambulance (and it wasn't often I got an ambulance from home) then I got to choose which one I went to... In the beginning, I would take turns in them (that sounds bad but it's the way it was) so that no one realised how often I was self-harming. But then I began to form opinions on each... Hospital A's staff would look at me like they were sick of the sight of me and in the end, they stopped asking for my reasons that had made me do the things that brought me to the Hospital. Hospital B was good for cuts... They'd dress them and let me go without a fuss and for overdoses; they showed a bit more care and concern than Hospital A. Hospital C seemed to have the right mix of care and concern while also acknowledging when I was safe to be discharged without any psychiatric input. If I had a reassuring experience with one Hospital then more often that not I'd go to that Hospital until I had a bad experience.
I know how this all sounds; taking turns going to various A&Es... I don't think that the regularity of my use of these services is acceptable and I'm sure I'm probably one of the people that others refer to when they speak of wasting resources (I've been told that often enough by the actual professionals) but the thing is perhaps rather than judge me and label me, they should've helped me? If the A&Es had just sat up and said "hang on a minute; this girl is overdosing every week! Something must be wrong..." and made some phone calls... It might not have gone on for as long as it did or gotten as bad as it did.
And, not once have I gone to A&E for no good reason, I've ALWAYS required treatment or help in one way or another. I've never gone to Accident and Emergency because my GPs was shut! That, is a waste of resources. As is, the party animals who have a few too many and fall or pass out! If you have the mental capacity to have made the decision to do whatever has landed you in A&E then that is a waste of time. But, to end up there because of a disorder which you did not bring upon yourself...
Rather than judging the problem, help it to go away. 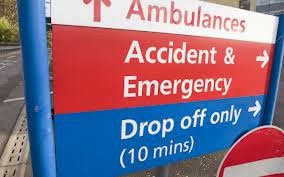