I've Been An Idiot

Wednesday, 27 August 2014
So, I finally have the confidence to blog about something that I haven't ever talked about on here; my love life. When my anger lessens, I might regret this but at the moment I am so angry and hurt that I'm not thinking about any complications this post might cause.
I was in a relationship for three years and it was... Well it began about six months before my first overdose and so, this person was with me from the beginning. We seemed to be opposites on the surface but we had lots of good times together and he was always so loving and supportive.
While we were together, I was introduced to another guy. We didn't talk so much at first but as the years went on and his family went through a massive ordeal I found us spending time together. As soon as I realised I had feelings for him, I ended my relationship because it wouldn't have been fair.
We spent time getting to know each other. I remember when I was in a medical hospital for a week and he came to visit me and we had a lovely time. He talked to me about the day his life changed forever and I felt so honoured to have him share those things with me. After he left the women in the bay of beds I was in were like 'you've got a good one there.'  And I smiled. As my mental health deteriorated I wasn't able to tell him what was going on; at the time, no one knew what I was doing. But then I was admitted to my local psychiatric hospital and I desperately needed a friend with a car to bring me an overnight bag. I asked this guy. Once I told him where I was, he stopped texting me. He went on holiday and when he got back, he was messaging me like nothing had happened. Normally, that would have done it for me; I'm not one to be treat like shit by a guy and put up with it but things were different with this guy... Right from when I begun to take an interest in boys, I was never the desperate one. I actually was a bit of a commitment phobia. But I found myself losing all of my usual independence and strength with this guy.
After talking, I confronted him about his silence. He stopped messaging me again. Usually, and with any other guy, that would've been it. I would have left it well alone; but not with him. Instead, I just told myself not to bring it up again.
He invited me to some important events and I met his family. When he was alone in the house one time, he asked me to sleep over. And one night I dropped all of my plans to go on a random drive with him to a shitty hotel for the night!
He invited me to a family memorial service and even though I'd met the family member, I was crying because all I wanted to do was sit with this guy and support him on such a hard day. And I couldn't. And that hurt.
Since I've been at this hospital, I was sent some flowers and they turned out to be from him. I was so unbelievably happy to hear they were from him and he told me he was apologising for being selfish. He has no idea as to how long I'd wanted to hear that. He told me things would change now and that we'd keep in touch. Just as I was beginning to get over him, he got my hopes up that there was still a chance for us to be an 'us.' It was unfair. But I never said this to him. And I sent a ridiculous/desperate amount of messages to him over the course of about eight months. I got no replies. I told myself that if I could just see him one more time then I could get over him. I let him know every time I was going home but got no replies. And when I seen him at the shops and my heart skipped a beat, I knew I had to keep trying.
I'm actually embarrassed to admit to all of this, especially as this isn't what I'm usually like.
So, what has triggered this post? The biggest day of his life has happened. And I had no idea it was happening. Or that he was considering such a thing.
All I have ever done is been supportive and caring. If he'd just told me he didn't have those feelings or if he hadn't kept leading me on when he knew how I felt about him then I could've moved on so much earlier. 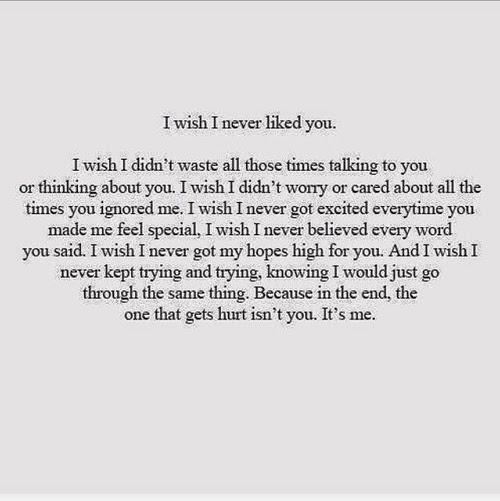