Tuesday, 11 November 2014
"The easiest reaction in the world is to see somebody who has committed something atrocious, label them as evil; want to lock the door, and throw away the key"
﻿
The whole of the mental health world on social media had great excitement upon hearing that for the very first time in over a century, Broadmoor opened it's doors to a TV crew. Apparently the negotiation talks lasted 5 YEARS!!! Understandable though, considering the media attention that Broadmoor gets.
During my admissions in psychiatric hospitals, I've realised that even within mental health there is some distance; towards particular diagnosis, symptoms, behaviours and types of wards. For example, the girls on the long-term personality specialist ward weren't comfortable to mix with those on the PICU (Psychiatric Intensive Care Unit). And I'm ashamed to say that I've always had a mis-informed opinion on the high secure psychiatric hospitals and their inpatients. At the Service User Awards earlier this year, there was some staff from a high secure hospital and when they stood up to speak they talked about how their inpatients were patients just like those in any other hospital. And this, was a massive learning curve for me that was repeated in the programme 'Broadmoor 'shown on ITV. They discussed how it is often thought that Broadmoor is a prison, but it is not; it's a high secure psychiatric hospital. Unlike prisoners, there is no release date and it is costing the country 5X more to detain a patient there than it does to lock up a prisoner.

"Being violent doesn't mean you're a bad person, sometimes you don't intend it"

The amount of similarities in routines at Broadmoor and those I have personally experienced were incredibly surprising. There were different wards for different stages of recovery with a PICU for those acutely poorly or at a high risk, and rehab as a step before the community, just like many of the hospitals I've been in. Life on the Broadmoor PICU was also similar to the PICUs I've been on with a staggering amount of planning going into what appears to be the simplest of tasks, such as giving a patient a drink. Although, it was still a little more dramatic with one patient requiring six staff to be present before unlocking their door! Other similarities were restraints, injections to forcibly give medication and 'eyesight observations' in which a patient has to be within eyesight of staff 24/7; another aspect I have personally experienced. A little more surprising fact in common was the rewards for hard work, mental stability and recovery; namely, a trip to the shop!

"often perpetrated for horrific crimes, but they are also victims"
As with all mental health documentaries, I worried that there'd be some reference to Borderline Personality Disorder, forever anxious there'll be another negative media portrayal which leads to mass public misconception. I think there was only one very vague reference, though I spotted some similarities with the patients, in addition to those with the routine of the hospital. One patient discussed their difficulty with having had thirteen different diagnosis whilst another appeared lucid and competent before the Doctor revealed his certainty that he was in a High Court battle with Broadmoor was a delusion. This, often happens when you are admitted to a new ward and you aren't really sure how poorly other patients are so you don't know whether to take anything they say seriously. I also found it interesting that one of the staff talked about how they could often resonate with the patients and their background, with one patient having been in mainstream education and a normal 14 year old when he committed his crime.
All in all, I'd say 'Broadmoor' was really interesting but... It's hard to explain... Broadmoor, Ashworth and Rampton are sort of seen as the 'Holy Trinity' of psychiatric hospitals; they have a certain allure. The well-publicized patients have caused much curiosity but seeing such similarities between Broadmoor and hospitals I've been in took away it's edge. For me, anyway.
﻿

You can still see the first episode here and the second and final episode of the series is on ITV at 9pm this Wednesday (12.11)

"they are mentally ill; but they are not stupid" 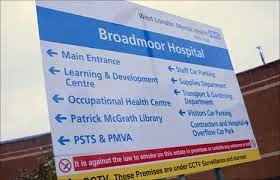