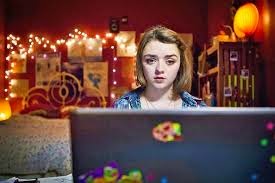 I decided to blog about this programme because being bullied can so easily link in with your mental health, and also because I was bullied.

After seeing the advert for this programme, I was keen to watch it. But I was also curious, as I wondered how they would justify the devastating affects that cyber bullying can have on a person and their mental health in just one episode. It's been widely publicised recently the incidents of young people being bullied or 'trolled' online resulting in suicide and I think that in a way, this is a positive thing. When I was being bullied at High School, I felt like an absolute loser/freak. For so long, I refused to admit I was being bullied because I felt that admitting to it, would make it worse; making me sound weak and even more foolish. And I think that these days, there's still an aspect of that in people; but there's also more strength and determination in people to seek help and put a stop to the bullying.

I thought the programme was amazing in that it was filmed in one room but it didn't get boring. And in just over an hour, they managed to leave a lasting impact on me. It was also interesting that they chose to film the programme from the opposite view to what is usually publicized in that it was the main character; Casey who was labelled the 'bully' and not the 'victim.' It was also interesting to watch Casey's reaction upon learning the affect she had on others' lives.

If you missed this show, you can catch it here

If you're being bullied, please get help and visit the YoungMinds VS site on one of their campaign categories against bullying﻿
Labels: advice, bullying, changes, childhood, help, media, memories, praise, review, support, TV
SHARE:
Newer Post Older Post
Home