Monday, 22 June 2015
Angela, the North East Regional Worker for Time to Change, kindly invited me to the National Public Health Conference this year at the Sage, Gateshead to blog and vlog, and of course I said 'yes.' She explained to me that they would be using a precise sort of activity in the Time to Change section and so, the volunteers were having training in it.
I decided that it might be refreshing to attend it and blog and film for it because I think that for those who are inexperienced in volunteering, it's assumed that all the work is on the day of the event and really, a lot of preparation goes into them.
So, leading the group today we had Angela from Time to Change, Oz from SoMe, Steve from Launchpad and Mish from North East Together. North East Together were originally given the opportunity to use SoMe and Time to Change commissioned them and became involved.

SoMe, evolved from Human Library which was an idea that people could be seen as 'books' and others could read a small bit about them and choose which to 'read' or meet them and engage in a face-to-face talk, providing the opportunity to get to know groups of people and therefore challenge stereotypes and pre-conceived attitudes through social contact. Slowly, people began to tailor Human Library to a specific subject and once the need for this was recognised SoMe was founded! These days, it is common for people to feel comfortable using social media by putting themselves out there and communicating and so these concepts were intergrated.
At a SoMe pop-up, there are three different areas: The Wall is where the volunteer's 'profiles' are displayed which feature minimum, selected information: 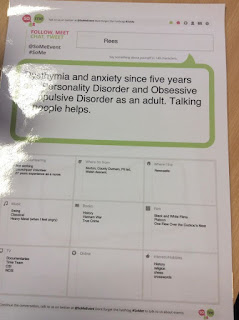 At The wall, delegates or members of the public, are instructed on how to use SoMe with an explanation that they may browse the wall and some may spot a profile of someone with a hobby in common, so they take down the profile of the person they are interested in speaking to. 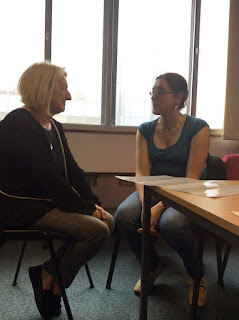 This, is the second part; the Chat Room where people are introduced to one another and is intended to be the equivalent to 'following' someone on Twitter. The advantage of this, is that the participants need no real knowledge of social media to engage in the concept. After a discussion, or if someone is passing by, there is the opportunity to 'tweet.' This, is the third part; participants are given a speech bubble and have 140 characters to write something about their experience with SoMe. People can then read these and 'reply' or respond to them.
To illustrate the variety of the volunteers, I thought I'd include the first activity at the training which was the Name Game where you had to go into pairs and discuss a fact about your name and something interesting about yourself.
Oz - was not his legal name and this meant that at University he didn't get all of his mail, his interesting fact was having nine cats
Angela - is derived from angelic messenger, though her Grandfather originally wanted to name her Evangeline, her interesting fact was an interest in Shakespeare and acting in his plays
David - was named after his father, his middle name is 'Blake' after his Great Grandfather and was a 3000m steeple chaser
Denise - was named after a french movie and in her life she's found that only women in a particular age range have that name, her interesting fact was that she once ran a chocolate company 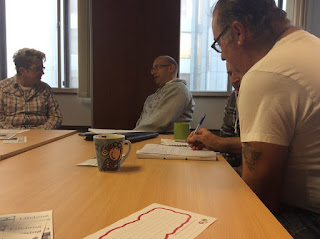 Rees - has a Welsh origin and was given his Grandfather's name, his interesting fact was that his family has links with the teaching profession and so he was mostly taught by his family and had a family member involved in a production with Andrew Lloyd Webber
Neil - means leader and has a Celtic origin with his family originating from Scotland and he likes to build mountain bikes from scratch
Tom - has an Irish origin and is taking part in a worldwide study to evaluate the effects of Dialectical Behaviour Therapy in comparison to Schema Therapy
Steve - his surname is from Ireland and he uses humour and honesty to talk to Social Work students about his anxiety and depression
Louise - is a French origin and was a qualified Emergency Treatment Doctor until a bereavement left her depressed and her contract was terminated
Lorraine - also has a French origin and is not spelled the way it was originally on her birth certificate, her interesting fact was that her first job after leaving school was packing prawns!
To trial the concept on the volunteers, four had their profiles put on a table and the other four had to choose one each. Neil chose Steve's profile as he had met him before but hadn't known about particular aspects of his life that were on the profile such as his battle with cancer. Many people felt that they had a more rounded understanding of the person they'd spoken to and found it was a balanced discussion as they discovered small things they had in common e.g. a love of the Lake District like two volunteers. No volunteer felt that they were unable to ask something in particular of one another, and found themselves having empathy towards a partner who was mistreat by services.
There was one worry though; that their honesty would cause distress to others. This caused a discussion on considering what each person was comfortable sharing and most people said they would share everything as they recognised that this was necessary in order to help the person to understand mental health. There was also a hope that it might encourage others to speak up and get help. Volunteers were told to watch out for signs that the other person may feel uncomfortable and if they were to disclose something, that the best response is to relate to it, help to think of coping strategies and refer them for help as well as praise them for opening up. Finally, the volunteers were encourage to take time for themselves throughout the two-day event, and seek staff support if triggered or distressed.

To watch the footage from this day: https://www.youtube.com/watch?v=urtnkr7xt5A4