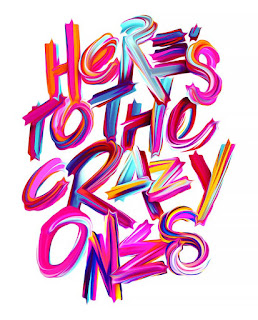 ONE. A person who cuts so badly they need stitches is struggling more than the person who only needs some steri-strips.
Everyone self-harms in different ways and those who have little to no experience or knowledge of cutting as a means of self-harm, may not realise or know that there are different ways to do it. For example, I would just swipe across meaning the cuts were only significant if the object was sharp, otherwise they appeared to be scratches. Others, may gauge and almost dig, causing more significant trauma. Therefore, depending upon the means of cutting and the intention behind it and motivation for it, treatment options will vary and this does not mean one person is struggling more than another or is more unwell.

TWO. The higher your dose of medication, the more poorly you are.
There are many types of psychiatric medication which have varying purposes e.g. anti-depressants, sedatives, anti-psychotics and mood stabilisers etc and there are also different medications within these categories in the same way that there are different painkillers e.g. paracetamol, Tramadol, morphine. And they work in different ways. If someone had broken their leg they may need 2mg of morphine but if someone has appendicitis they may need Tramadol and anti-sickness medications. Neither is more poorly than the other as they have completely different ailments. And it is the same in mental health. Someone with clinical depression may need a high dose of an anti-depressant but someone who has mood swings (for example in BPD) where depression is an 'episodic event' then a smaller dose may be sufficient.

THREE. Voluntary inpatients are more well than those who are detained under the Mental Health Act.
Often a voluntary patient has agreed to go into hospital or to accept treatment, because they are threatened and told that if they do not go in voluntarily they will be sectioned and detained under the Mental Health Act 1983 and taken to hospital by force and kept there against their will. Those who may have previous experience in services and as an inpatient might believe that you are more easily and quickly discharged when it is recorded that you have gone into hospital voluntarily. Others may have experienced that being a voluntary patient should mean that you have more rights but this doesn't necessarily happen

FOUR. The more admissions you've had, the more you know about the system and services.
All mental health professionals have different opinions and views on situations and mental health Disorders and the subsequent ways in which people cope with their symptoms. For example, some Psychiatrists may prefer to air on the side of caution if confronted with a service user who was self-harming. They may go to drastic lengths to attempt to ensure this person's safety, for example, by detaining them under the Mental Health Act or sedating them. Another consultant, when faced with the same situation, may decide to allow the individual the opportunity to maintain their own safety and 'take responsibility for their actions.' Therefore, no matter how much contact with services you have, you can not predict decisions and attitudes etc.

FIVE. You are discharged from hospital when you are ready, and when you are well.
Many inpatients are so desperate to be discharged from hospital that they will fake recovery, pretend that they are better, stop self-harming, start eating... Whatever it is that has brought them into hospital. Some want to be discharged because they absolutely hate inpatient care, which could, again, be for many reasons... The ward that I was on promoted structure and so you had to be up at a certain time and attend groups throughout the day. For those who weren't used to this or willing to co-operate, their solution was to fake recovery in order to leave such an environment. In all honesty, professionals know that patients 'play the game' and although they can't always tell when this is what is happening, it does make them more suspicious of those of us who are actually improving! Also, even if you do improve in hospital, you may not necessarily be 'well' when you are discharged; you just need to be better.

SIX. Being an inpatient in a psychiatric hospital, guarantees your safety.
Determination is a powerful thing, especially where self-harm and suicide is concerned. If someone is suicidal or intent upon hurting themselves then they'll go to any lengths to make this happen. Some inpatient units have 'seclusion rooms' and most are literally a room with a window in the door and a mattress inside. And you can still hurt yourself. Speaking from experience, I've been restrained into a seclusion room to stop me from self-harming and have then had to be sedated because I continued to. Also, someone may purely cut as a form of self-harm but once hospitalised without their usual sharps, turn to another - and possibly more dangerous, form of self-harm. Finally, some thought must be given to the fact that patients can find ways to sneak sharps or tablets into hospital, if unable to source them on the ward.

SEVEN. Those patients and service users who hallucinate are more poorly than those who don't.
Having hallucinations could be an indicator of a very serious mental health disorder but, this is not always the case. Sometimes hallucinations can be stress related as they usually are with Borderline Personality Disorder. Ultimately, experiencing the hallucinations is enough to warrant treatment despite it's possible cause; mine were stress-related my an anti-psychotic medication helped me to get control over them whilst I engaged in therapy. As with all mental health diagnosis; different people will experience different symptoms to a different extent and degree. Two people who have depression will be completely different. One may be unable to find motivation to do anything. The other might turn to self-harm and even attempt suicide.

EIGHT. Initiating help when you self-harm or attempt suicide, means you did it for attention.
People will overdose and self-harm for many different reasons. From my own experience, I would often take such drastic action in response to commands from my auditory hallucinations. This meant that after doing what they wanted, they were go quiet again and I was able to enlist help. I would often overdose to make the voices happy, they'd silence and I'd go to A&E because I don't want to die and then the voices would begin and I'd have to refuse treatment or run away. That confused people; I'd seek help and then refuse it. Also, the majority of moods and feelings are transient, and so self-harming or attempting suicide whilst feeling depressed, low, anxious, triggered etc could mean that once your mood improves, you want help for what you have done to stop it from killing you. It has nothing to do with attention.

NINE. Service Users motivate one another to recover and are good support systems for one another.
I would love to say that this is 100% true. Because it should be. But realistically, and from experience, this isn't always the case. If you make a friend as an inpatient then you're incredibly lucky.If you meet a person in Hospital who encourages you to recover and to co-operate with the staff, then you're onto a winner! The problem is, everyone is at different stages of recovery and has different experiences of services. In terms of recovery, someone may have just been admitted and are hell-bent on self-harming and angry at professionals who try to stop them. They may be others on the ward who no longer self-harm and find therapy and staff support incredibly helpful with this. Therefore, when you get two inpatients who are at the same (low) stage of recovery together, their methods to self-harm etc will be shared. Personally, I witnessed girls on the ward I was on, teaching one another how to self-harm by inserting hair grips under the skin. It became some sort of twisted trend and so many of the girls were doing it and needing operations to extract the grips. Once I learnt which inpatients were 'bad' for me/unhelpful with my recovery, I spent little to no time with them.Once my best-friend; Chelsea left, I mainly kept to myself in my bedroom other than at groups etc and Rebecca was really the only one I spent time with. I wanted to get better and some of the girls on that ward weren't so passionate about leaving the hospital.

TEN. (by Rebecca) Those with Anorexia are in recovery once they are at a healthy weight.
Anorexia is the most vicious killer I can think of, and the fatalities and complications can come at any point, even after physical recvery (I've maintained a healthy weight for about 4 months, and still ended up in hospital 6 times in the time from complications) or mental recovery (some days I don't hate myself. It doesn't stop my bones from aching). It doesn't discriminate. At the same time, mental recovery is even more complicated than physical and, horrible as it is, a healthy body does not mean a healthy mind. I hallucinate what's sort of the voice of my Anorexia most of the time, I'm engaging in unhealthy behaviours again and, if I'm honest, I feel constantly close to relapsing. That doesn't mean I will, but it also doesn't mean that magically hitting the healthy BMI category has cured me. Health is relative, especially mental. One man's poison and all that. I'll tell you something though, that doesn't mean recovery isn't possible. I'm living it, despite it all, but it's a journey and not a destination. Gaining weight, if necessary, is responding to a symptom and not the cause. It's like having piercing headaches constantly and expecting that paracetamol will cure it rather than mask it. Accepting a healthy weight is the first step, necessary to start, but not the whole journey.