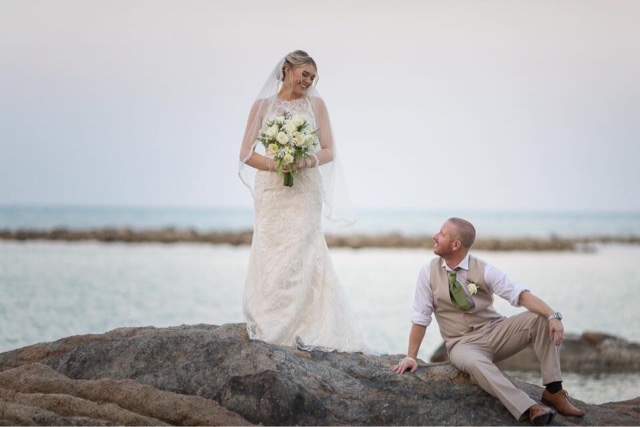 How did you and Craig first meet?

Me and Craig first met at work - it was my first day and he was one of the first people I was introduced too!

What were your first thoughts about him?
He was so confident, welcoming, warm and smiley!
Has that changed now?
Of course not!

Tell me about your first date. When was it? What did you both do? And how did you feel about Craig afterwards?
Me and Craig were both in relationships when we first met and became friends through seeing each other once a week at work. We both finished our relationships at around the same time and I was also leaving my job. I said my goodbyes to Craig and he left! 10 minutes later he came back in and said he couldn't leave knowing he might never see me again and took my number! A few weeks later he asked me out on a date and I said no as we were too good of friends by that point! So our first two 'dates' consisted of Craig coming for drinks with me and my mum and then a walk with my dog and little sister. Following the walk we sat on the sofa and put on a film - I fell asleep and woke up half way through the night with Craig sitting fast asleep and Molly cuddled into him! He had Molly's approval at this point! Craig insisted on helping me redecorate my apartment as I was useless and every time he turned up he'd have flowers or my favourite sweets for me! Soon we had booked a holiday to Florida as friends for the following May! We still haven't even kissed at this point and kept on saying 'what if one of us gets in a relationship before then' Craig looked after Molly when I went away to York and I rang him when I was drunk and didn't want to get off the phone - this is the ultimate more than a friend sign! When I came home Molly was looked after and I had flowers and a new look voucher waiting for me on the bench. A few weeks later he looked after Molly when I went on my Christmas night out - Molly didn't leave and within a week, neither did I! So, we didn't really have a first date - it all just happened! 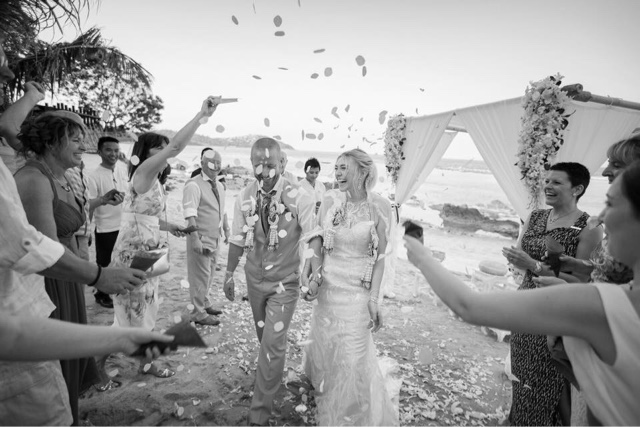 List five things that you both have in common:
1. Our love for the states
2. Our hopes for the future
3. Our drive and commitment
4. Our family values
5. Our outgoing personalities
List three differences between you both:
1. Football and Golf
2. The fact I think he's ginger and he insists he isn't!
3. Age

Tell me about when you first said 'I love you.' When was it? Where were you? Why did you decide to say it then? Who said it first?
CRAIG IS GOING TO LOVE THIS! Because he claims he can't remember and being a typical girl I won't let him live it down. More so, wind him up about it! It was the night of my Christmas party when Molly unintentionally moved in. I was so drunk and was sitting on his kitchen floor against the door. Extremely romantic it was. Craig said it first.

How far into your relationship did you know you had a future together?
We got engaged pretty quick really after both being in long relationships in the past. When you know, you know. Cliché. 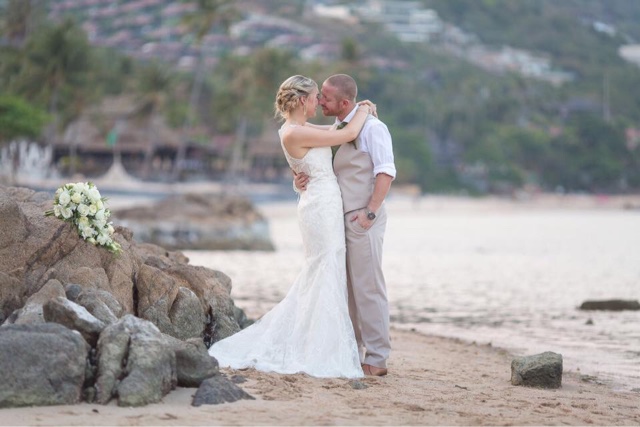 When did you decide to live together? And what made you decide to?
I think I've already covered this! Molly stopped over one night and didn't leave, within a week I had done the same ha ha! Totally unintentional, we just didn't see the point in going to work and coming home to our own houses when we wanted to be with each other, purely because we had spent the last 3 nights together.
What has been the greatest thing about living together?
One of us always has the other to come home to
What has been the hardest?
I will spend 20 hours cleaning and tidying then Craig will come home from work and disrupt everything! (Like leave his shoes at the door or crumbs on the bench, like, seriously? 🙄😒)

Tell me about the proposal. Where was it? Did he go down on one knee? Was it completely unexpected?
The proposal itself wasn't completely unexpected - but the fact he was going to was! A friend of mine got engaged and we ended up talking about rings really early in our relationship and I described what I would change on hers and have etc just in conversation. Little did I know Craig had made a mental note and had my ring made especially from what I had described! Craig being Craig couldn't keep a secret! He was supposed to propose on our 'friend' holiday in the states and one night before we went out he couldn't help himself but tell me he had something for me and I HAD to try it on incase it didn't fit. It wasn't the proposal, but he couldn't keep it a secret as he was so pleased with himself at how amazing the ring was! As soon as I realised it was a ring I was scared to look incase I didn't like it! We had to cancel our taxi as it took so long for me to pluck up the courage to look! Anyway, it was more than I could ever have DREAMED of and it fit perfectly. He put it away and I was to wait until Florida. We went to our quarterly slaley hall trip and Craig was acting so bizarre! I kept on asking what his problem was on the way down there! Once we got there Craig said he needed the toilet so I raced him to the room so I could get there first just to be awkward. When I came out he was sitting there with the ring. Said he couldn't wait any longer! Totally unexpected! 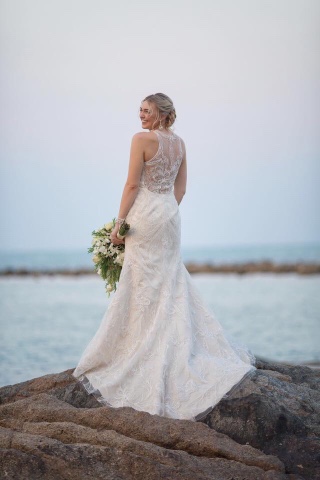 What was the first aspect of the wedding that you both decided upon?
We both decided that we wanted to have it abroad after having a big do for the engagement party.

Who made most of the wedding decisions?
Me, of course. Craig got to choose  the cake over there and he was so proud that he chose the cake and had a part and then hilariously they got back to us and said that they didn't have that design of cake and we had to chose another! So I chose a new cake and he never noticed!

Did you have any differences of opinion on anything to do with the wedding?
Yes, but I think it was just Craig trying to be awkward ha ha, he'd make me do everything his way and then my way and end up going 'yeah you were right'. Typical man - I had to do everything twice for it to be the way I had planned in the first place!

What was your favourite part to plan?
Taking everyone over to Thailand and knowing we were having a Buddhist style ceremony.
What was the most stressful?
Everything! Everything went wrong and I mean EVERYTHING! You name it and it's gone wrong and been planned twice (thrice in some cases).

Tell me about your wedding day. Where did you get married? Why did you choose there? How did you feel in the hours before it? How did you feel when you first saw Craig?
We got married in Thailand and chose there because 1. Craig plans all holidays and I wanted to go there and he would never book it! And 2. I really wanted a Buddhist style ceremony. The intimacy, the meaning, the family involvement, the blessing, the love. It was all just SO us and something to be treasured forever and an experience never to be forgotten for all involved. I was fine in the days, weeks, months leading up. I didn't see it as a big deal at all as nothing was changing, apart from my name, upon our return! With the stress of the whole wedding and things going wrong just the morning of the wedding I ended up having a panic attack about an hour before! I ended up sitting on the toilet with my head between my legs doing breathing exercises with all of the ladies in the family! It was hilarious really. Then everyone left and me, my dad and my bridesmaids were in the hotel room waiting to go down. We heard the long drum parade and the hairs on my whole body stood up and I got serious butterflies as I knew that was Craig being took down!!!!! It was a surreal moment (and it meant I knew he had turned up!!! Woohoo!) I then got took down by the parade of drums and dancers and I was at the top of the stairs and I saw Craig and he burst into tears and it made my heart melt.

What did you do during the 24 hours after you got married? Did your relationship feel any different?
We had a champagne breakfast in the room and then my mum and her partner came round to our private pool and we all sat and drank more champagne! We spent time around the main pool with cocktails and then went out into Koh Samui on the evening for food and drinks with the whole family! 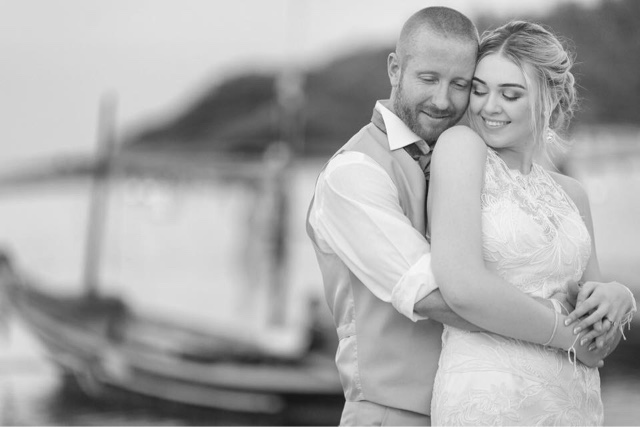 What do you think you and Craig will be doing in five years time?
God only knows! Our five year plan keeps changing! We (I) wanted children before Craig was 35 but he's 34 in a few months so that is out of the window! We are enjoying our holidays and weekends away far too much still and I want to go full force into my career. We want to move to the states which we are constantly looking into but whether or not we could leave our families for having grandkids is unknown! Let's just wait and see and enjoy it in the mean time!

If you could sum Craig up in three words, what would they be?
I can't think of three words to sum Craig up, but when I think about him it makes me smile and I think that speaks volumes. 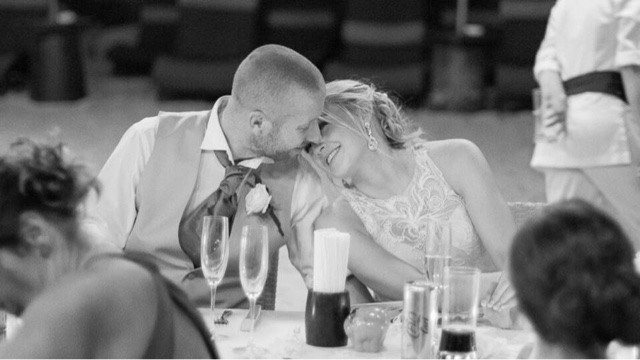