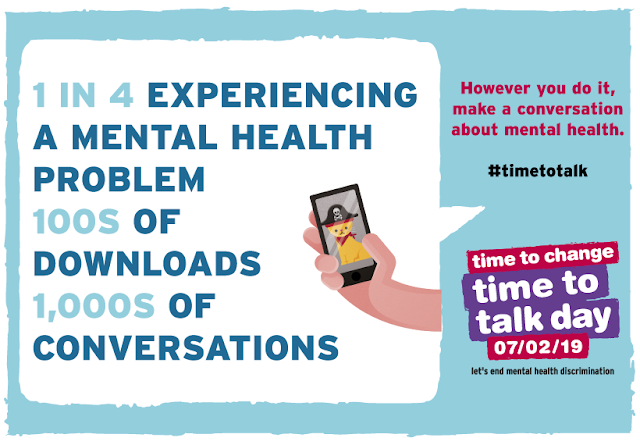 So, I’ve had a few comments today asking if I’m actually going to write something for Time To Talk Day 2019 since my two posts so far have been penned by others (haven’t seen them? (They’re here and here!) With the theme that talking about mental health will help rid us of the stigma, I thought I’d talk about why talking is just the beginning of things…


When I started experiencing auditory hallucinations I had never felt so alone. It sounds ironic but the second I started to hear voices, it felt as though I was the only person in the world. I think that a large part of this came from the fact that mental health – and most importantly; voice hearing - was rarely talked about in 2009 and so it held huge, stigmatized connotations and assumptions. I, personally, had only ever heard horror stories about my local psychiatric hospital so being admitted there was a huge shock to the system… and attitude! taught me that mental ill health doesn’t discriminate; it can happen to anyone and calling those people ‘crazy’ or ‘mental’ says more about you than it does about them.


It’s important though, that it shouldn’t take another person experiencing mental ill health to have some understanding of someone who already does! Empathy should be a mental health service provider’s best-friend; the ability to understand another person’s experiences is a difficult art in mental health.

This isn’t just about an ‘us’ and ‘them’ culture though; even as fellow service users we are limited to what we understand of one another. Hearing voices, for example, occurs in different ways so whilst I learnt an analogy that helps professionals understand my experiences, it might not be applicable to other service users. Personally, I hear voices the way you hear music through headphones; it goes through your ears but seems to somehow fill your entire head. I was extremely fortunate in managing to find or create an analogy that those who don’t experience auditory hallucinations can relate to because a lot of people might never have that and go through life feeling alone and misunderstood.


It doesn’t just stop at hallucinations though; two people could go through the same situation, yet they still manage to experience it in different ways and if that’s the case, it makes you wonder how we can possibly comprehend what another person is going through. Abuse is one of those things. I once had a Nurse tell me that she’d been abused when she was younger yet she’d never self-harmed. Obviously, this comment was inappropriate, but it illustrates that everyone experiences abuse in different ways and so their coping mechanisms change too. Where alcohol might block the emotional pain for some, self-harm could do the same job for others. There’re also opposite sides of the spectrum like where this Nurse said she’s never self-harmed. There’s people who find determination through abuse and seek to succeed, and then there’s people who become hopeless and depressed. But it doesn’t mean you have to fit into one category or the other; I frequently flitted between both categories because mental health is ever-changing.


When I was diagnosed with Borderline Personality Disorder (now called Emotionally Unstable Personality Disorder) the diagnostic criteria were that a person had to be experiencing at least five of nine possible ‘symptoms.’ This meant that even being on a ward that specialized in the diagnosis, each service user could be experiencing a different combination of ‘symptoms’ and are therefore still somewhat immune to being able to relate to one another. Then there’s the fact that each ‘symptom’ could be responded to in a different way. One possible ‘symptom’ of BPD was experiencing an uncontrollable anger, but you could meet two people who struggle with this and one might become violent or aggressive when they’re angry and the other might channel their anger into self-harming. Some might say I was lucky – in a way – to be diagnosed with all nine symptoms and therefore able to relate more to most of the people on the ward! I say lucky because it meant that I was involved in a lot less confrontations and dramas so that where others were butting heads (sometimes literally!), I was acting as mediator. But whilst some service users could be triggering and bad influences, I found some of the greatest support I’ve ever had in talking to other inpatients. After experiencing years of feeling misunderstood and misinterpreted, the feeling that someone else ‘gets you’ or knows what you mean when you speak is very powerful. And sadly, it’s something that you can’t get from a lot of staff. I recognize that there’s a hell of a lot of mental health professionals out there these days who have lived experience of mental illness, but the saddest thing is that to truly show – in the same as another service user can - that you can empathize with a service user, you’d probably be overstepping boundaries and guidelines!


It is days like today – Time To Talk Day 2019 – that help illustrate that talking about mental health might just be the start of something a lot bigger.
Labels: emotions, mental health, relationships, struggling, Time To Change, Time To Talk
SHARE:
Newer Post Older Post
Home