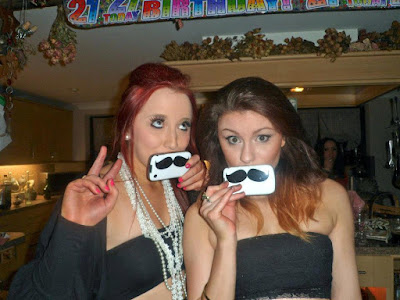 ps. i have so many pics with my besties that i decided to just include this one because I think it sums up friendship perfectly!


With it recently being Best Friends Day, I was inspired to write this post all about why friendship is so important in mental health…


Growing up, I don’t think I ever paid much attention to my friendships, and that doesn’t mean I was isolated and didn’t have any. It was just that I wasn’t really conscious of the possibility that I could be friendless and that meant I wasn’t very appreciative of the fact that I had three best friends who I’d do everything with!


I felt like this all through First School until we started Middle School and each of us found their own friendship groups. It seemed to be fairly natural and with us all being in different classes anyway it’s kind of just made sense that we’d find other friends who were in our class. A huge milestone and test in the group’s friendship came when one of my friends lost her mother very suddenly. Our other two friends had no real reaction – that I know of – but I (and my Mum!) were there for her and her family in a flash, and our friendship seemed to repair itself a little for the duration of Middle School.


By the time High School came around, we had all split up and didn’t even all go to the same school!

Over the following two years my friendship groups really fluctuated and were unstable; one minute I was part of one group and then I talked to someone from another and joined them. Professionals would say that this was an early warning sign of my mental health diagnosis; Borderline Personality Disorder because unstable relationships are actually one aspect of the diagnosis criteria. In my third year of High School, the abuse began, and I was no longer bothered about friendships. I guess that I was just so caught up in trying to survive the hardest thing in my life that making friends, bonding with someone…? It just wasn’t important anymore. I think I was being protective too because I didn’t want someone to get to know me in case they uncovered the secret (at this point I still hadn’t reported the abuse)or if they grew to like and they’d become another person who’d be upset when they heard what had been happening to me and offended when they realized I hadn’t confided in them. And I already had enough people that would feel like that when the truth came out that I didn’t want to add to that number.


Leaving High School and starting my A Levels at Sixth Form in a different School, it took me a little while to allow myself to open up to someone and it took even longer to find the right person to do that with. But I found TWO! Lauren and I had a mutual friend and we got talking via MySpace (back in those days) when she had an awesome Scouting For Girls song on her profile! Once we got talking, I started spending break time and lunch time with her and a group of her friends because we weren’t in the same classes. But Ellie was! I’d gone to History class and found someone sat in my usual seat and the only empty one in the room was next to Ellie who I hadn’t said one word to since the start of term! But when I did say one word; we hit it off and spent our History and Philosophy classes together but no matter how much time I spent with my new best friends, when I began hallucinating and having suicidal thoughts, I didn’t confide in them. I didn’t confide in anyone until it was too late – until I’d taken an overdose and been sectioned under the Mental Health Act. ealth Act

Through the first two years of my poor mental health, I spent a large time in and out of hospitals – medical and psychiatric – and had no real time to build on friendships; only to maintain them. Barely, maintain them. Then, in 2011, I found myself under the greatest community mental health team EVER(!) and became the most stable I had ever been in the community. This allowed me the chance to spend A LOT more time with Lauren… and alcohol! We used to do this night out that locals call ‘Thursbay’ because it was a night in Whitley Bay on a Thursday! We had a Halloween together, Boxing Day… and many other weekends! And it all resulted in some amazing photos!


Going over 100 miles away to Cygnet Hospital Bierley in 2012, meant that inevitably; my friendships dwindled. I think that I was so caught up in the rigmarole of the group and therapy timetable of the ward that I didn’t have a moment to even notice that I was barely speaking to my best friends! And then it became about concentrating on actually getting better so that I could move back up North and rebuild my relationships! From Cygnet I was transferred (in 2014) to a ‘rehab ward’ nearer home which was actually an independent bungalow with the 24/7 staff support from their own little bungalow! I hadn’t been there long, and Lauren and I were meeting up for food and one hell of a catch-up!


Once I had moved into my home and Ellie had given birth to Emmy (yes, there’s my god-daughter Emmy AND my kitten Emmy!), she and I began to build our relationship back up!


These days, Lauren, Ellie, and I are leading completely different lives, yet they are still my very best friends and I’d be lost without them. We each now live in a different town – in fact, Lauren is almost in a completely different country! – and are doing different things with our lives – Ellie is a Uni student with three children and Lauren has moved in with her boyfriend and is working for the NHS. I also now have two more besties in my life – Georgie and Martin. Georgie and I met a few years ago and have each gone through – and beaten - so many mental health challenges that have led us to where we are today – Georgie is now has her own home and is working as a Healthcare Assistant for the NHS! Then Martin and I met while volunteering at a Time To Change event and have grown so close over our mutual love and respect for blogging – and one another! Martin blogs over on gumonmyshoe.com and has also penned a book with his best friend Fran Houston! I’ve said this before and I’ll say it again – not having a fellow Blogger friend in my life left me feeling quite lonely and so when Martin came along I felt connected and very inspired. He helps push me (in a non-competitive or pressurized way!) to create better content, land more collaborations, and take more opportunities, in a way that no one else in the world could!


But that’s what best friends are for, right?!