“HAVE YOU THOUGHT ABOUT HOW COAL MINING IS RELEVANT TO A MENTAL HEALTH BLOG?!” | #HiddenHistories | AD 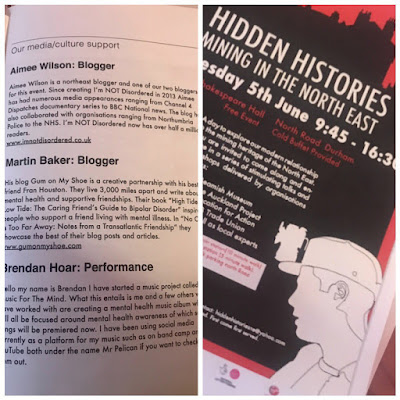 When a friend asked me to blog and do social media at an event she was organizing I was immediately up for it. Then she told me it was called Hidden Histories: Mining in the North East and I hesitated… I mean, I know that I’m known for making anything and everything relevant to mental health because I’m a great believer that mental health affects anyone and anything, but I’ll admit; I was stumped with coal mining. So, I did something very different of me; I asked someone else for inspiration! I spoke to one of the key organizers: Soph Hopkins, and she talked about how she and some of the other volunteers had met through mental health services and that they had involved mental health in the event with discussions on our own ‘hidden histories’ (personal experiences), ways that society has changed over the years that coal mining has and there was even a mental health song called Monsters!


There were a few things I took away from the event that I thought were apt for I’m NOT Disordered readers:


1.      If someone is passionate about something different to yourself, they have the ability to make it interesting

In the Coffee break, after a quick general history of mining by Beamish Museum, I spoke with their staff and admitted that I had been worried that I’d be bored or at least uninterested and that I was purely there to help with publicity. But I had thoroughly enjoyed their talk because their speaker; Jonathan Kindleysides was so passionate about the topic that it rubbed off onto his audience. I also learnt this through Soph in that she was clearly very interested in the subject to have hosted such a large-scale event about the topic and I think I’m quite a dedicated friend in that when I’m friends with someone, I’ll support them no matter what. And if that means finding a way to blog about a coal mining event then that’s what I’ll do!

2.      Something that you think is an obvious answer, can actually still be controversial and debatable

In one of the discussion sessions during the day, we were all asked whether we change the way we communicate depending on who we are talking to. I, personally, thought this was an obvious ‘yes, of course I do; because you should!’ but actually, there were quite a few people in the room who said ‘no.’ And it was interesting to hear their rationale behind it; with the most common and prominent one being: ‘if you use baby language it might take longer for the child to learn the actual, right words!’ This did make sense, but I still stood by my ‘yes’ to the question because it doesn’t necessarily mean that I think it’s correct to communicate differently but it is definitely something I do. I speak to my God Children in much simpler terms than I would speak with an adult and then one of them has learning difficulties, so I feel like I speak differently again with him.

3.      Seemingly simple topics can lead to much deeper conversations

The above question and discussion led onto a deeper conversation about children being shielded from the realities of life and I talked about how I always check with my best-friend (the Mum of my God Children) that it’s ok to have my self-harm scars on show when the children are around. I said that rightly or wrongly, I believe children should be protected from the knowledge of some of the horrific things that go on in life in that whilst it’s important that children learn right and wrong to recognize abuse; I don’t think they shouldn’t be told about an actual case of abuse especially where it’s resulted in death. I also, however, recognize a need for balance in ensuring that the child isn’t wrapped in cotton wool too because when that’s the case, the realities of life later on can be dangerously shocking. But there’s another balance that children must be allowed to be children and shouldn’t be allowed to see or hear something that should only be for adult eyes and ears!