WHY RAPE & SEXUAL ABUSE ARE SO TABOO 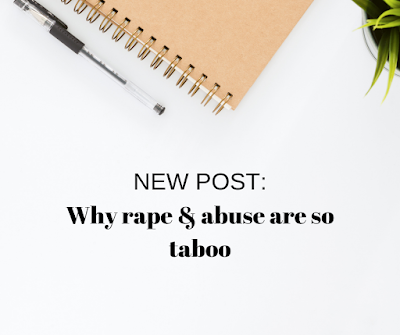 I don’t think I talk about LEAPS a lot on here because we have a very strict confidentiality agreement – but for those who don’t know, Listening Ear And Positive Support (LEAPS) is a support group for people who are unemployed. The nature of the organization means that there’s a lot of private and personal things discussed at the weekly meetings, but this was something I said so I guess it’s my decision to make it public…. A while ago, I secured Lottery funding for LEAPS with one of our budgets being to fund a group session on Cognitive Behaviour Therapy (CBT). So, the other day at the CBT session we were talking about ‘errors in thinking’ and I gave a personal example about how – for a long time – I blamed myself for the abuse I went through. I’ve known this group of all men for over two years now and it made me wonder why I feel like I can talk to them about this…


NOT KNOWING THE WORDS:

Growing up, I don’t remember much about our sexual education at school; other than being told about periods and putting a condom on a banana! It meant that when the abuse began, I didn’t know what to call it. I had never heard the words ‘abuse’ or ‘rape’ before and I only knew what he was doing to me was wrong because it felt wrong. It felt wrong having something happen that I didn’t want to happen and to have something happen that I wasn’t allowed to talk about to anyone. His promises that either no one would believe me, or everyone would think I’d deserved it, left me using all kinds of behaviours to tell people what was happening to me because I wasn’t allowed to use words.


THE STIGMA FROM CELEBRITY ACCUSATIONS:

I always felt that I’d had an idyllic childhood that meant I was sheltered from things like this happening to other people all over the world but actually, there was a whole lot less media about sexual abuse and rape back then anyway. It wasn’t something that was talked about a whole lot and if it was talked about it was either minimized or swept under the rug. There were no honest, raw, and real-life accounts from abuse survivors; and there definitely wasn’t half as many ‘celebrities’ being accused of committing such crimes. The numerous accusations against ‘celebrities’ have tainted rape and sexual abuse on a whole new level. It has either encouraged some people to speak up and talk about their own experiences, bolstered by the examples of justice that have been sought after in some of these cases. On the other hand, it has made others reluctant to speak up because they’ve seen the controversy and judgement the accusations have sparked.


Me? Well I would always support people speaking up about their experiences, but I do worry that, in some cases, the accusations are perceived as false by members of the public and assumed to be a bid to get either media attention, or financial gain… or both! This scares me because who’s to say these people speaking up have actually taken so long to report it because they were afraid people would think these things of them?


FINDING THE TIME TO TALK:


I was in no way ready to talk about it when I finally reported the abuse and rape but – with help – I had come to the conclusion that I might never be ready. Really, though, in terms of this, what the hell does ‘ready’ even mean?! ‘Fully prepared’ and in a ‘suitable state’ according to the dictionary. How can someone ever be ‘prepared’ to talk about the worst thing in their life? How can a person ever feel ‘in a comfortable state’ to speak about the time they felt most vulnerable? Being in a psychiatric hospital, though, seemed like the ‘best’ opportunity; I had support all around me, and talking about it couldn’t make things any worse – I had already attempted suicide and been sectioned under the Mental Health Act (1983)!


Fear of judgement was also a huge factor in my reluctance to report my trauma because I knew that as soon as someone knew what had happened to me, they’d come to a determination; had I deserved it? Or had I not? Then, when he claimed to be innocent, I was even more reluctant to talk about it because I knew that it’d mean everyone who knew would have to choose a side; did they believe me? Or him?


WHAT HAPPENS TO THE ABUSERS & RAPISTS:
o    60% of rapes/sexual assaults are not reported to police, according to a statistical average of the past 5 years.  Those rapists, of course, never spend a day in prison.  Factoring in unreported rapes, only about 6% of rapists ever serve a day in jail.
o    If a rape is reported, there is a 50.8% chance of an arrest.
o    If an arrest is made, there is an 80% chance of prosecution.
o    If there is a prosecution, there is a 58% chance of conviction.
o    If there is a felony conviction, there is a 69% chance the convict will spend time in jail.
o    So even in the 39% of attacks that are reported to police, there is only a 16.3% chance the rapist will end up in prison.
o    Factoring in unreported rapes, about 6% of rapists will ever spend a day in jail
o    15 of 16 walk free