So welcome to December 17th…

Today is all about my collaboration with one very special brand on Etsy, in this post I’ll be reviewing the products they sent to me and on December 23rd you can enter a competition to win these products and the remaining two that I’ll be reviewing every other day this month!

Ok, so I won’t lie; I’ve annoyed myself a bit with this post so I thought maybe I’d just bluff my way through it but you know how I pride myself on being honest with you guys… So, I received A LOT of goodies from A Band of Hope but have only taken pics of some of them so to see more, you’ll just have to enter the competition!

In the meantime, though, here’s three of the various badges and what they mean to me:

‘More Than My Illness’ 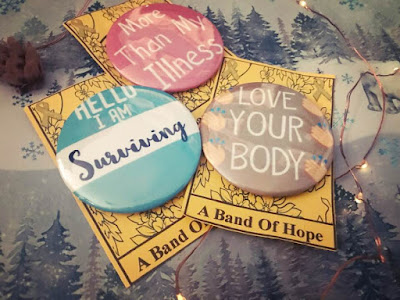 I absolutely love this badge because it pretty much sums up the method behind the blog’s name. ‘I’m NOT Disordered’ came from my determination to show others that I may have a diagnosis but that is not who I am. It’s a part of me, yes; but it isn’t the only part of me.


A little while ago, the powers that be changed the name Borderline Personality Disorder (BPD) to Emotionally Unstable Personality Disorder (EUPD) and when I first heard this, I actually laughed out loud! I mean, personally? My problem (and others have agreed) with the label is the ‘Personality’ part of it and not the part that they changed!


‘Personality’ is usually defined by people as being ‘you’ and who you are, the ‘type’ of person you are, your morals and priorities, your likes and dislikes, everything. So, being told that it’s ‘disordered’ is like, the ultimate self-esteem knock. It might sound silly or shallow but one of my first thoughts when I was given my diagnosis was ‘how will I ever find a guy willing to go out with me if I have that?!’ My point in telling you this is that rather than think it a trivial aspect of mental health, you’ll see that this is just how far-reaching the impact is that BPD can have on a person.


It took me a good few years (maybe four?) to find the confidence that it takes to fully believe that you’re more than the label they stuck to your forehead for the whole world to see! I mean, when I was diagnosed with BPD, the diagnostic criteria were that you have at least five out of nine possible ‘symptoms.’ When I had my assessment, they determined that I had all nine so how could I not develop the though process that Borderline Personality Disorder summed me up. It became more than a diagnosis and a label; it was a definition. I was defined by my mental health and when people would first meet me, that’d be what they saw. 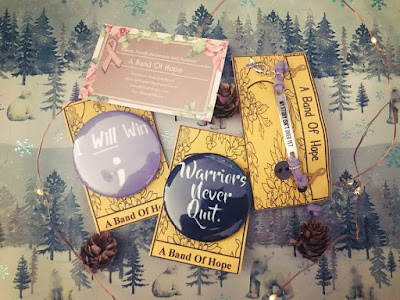 How did I learn to recognize that there’s more to me than this? Probably when I began to recover from it! Recovery showed me that I was still a person; yes, I’d been through a lot and as a result I held certain beliefs and experienced particular thoughts which led to some behaviours, but I was determined not to allow others to see me as something – someone – I am not.

‘Hello I Am Surviving’


Going through recovery with my mental health, I learnt a lot about surviving and how it might seem pretty basic, and fundamental, but it can still be a massively rewarding achievement in particular situations.


I honestly believe that from the abuse starting in 2006 to my admission to the specialist, long-term psychiatric hospital in 2014, I was just surviving through life. I wasn’t even really ‘living.’ I wasn’t enjoying life or making the most of it. It felt that I was constantly either wanting to - or actually trying to – end my life. It seemed that I was purely getting through things; just muddling through, pushing my way against all these challenges of memories of the abuse and the hallucinations. I was gritting my teeth and baring it. Just.


Every time the auditory hallucinations would persuade me to self-harm or attempt suicide, I had to cut myself off from reality and life, and just do what I felt I had to do to get through. I was barely functioning; a robot, a zombie, just completely removed from reality – it was the only way I could go against my natural human instinct of saving myself and avoiding pain and harm instead of putting it on myself. 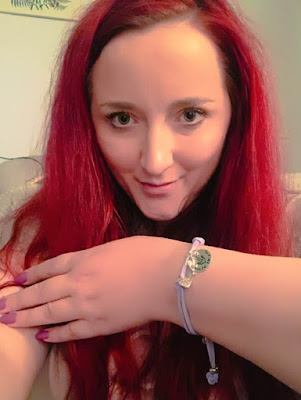 
This is definitely something I’m still learning. I actually watched a film last night (I Feel Pretty) with one of the besties and it was about a girl who’s self-esteem changes so dramatically that she believes it’s magic and that she looks different but she eventually realizes that it was her mental health that had changed.


Before going into the long-term psychiatric hospital, I had been underweight – to the point where if it weren’t for one small thing, I would have been diagnosed with Anorexia. When I went into hospital, I was put on a lot of medication where the side effects were weight gain. Also, being sectioned under the Mental Health Act meant that I rarely got to go outside and have any exercise even though we were being fed so many carbs in the hospital’s food!


Inevitably, I put on a lot of weight and have struggled to lose it but part of me thinks that I probably shouldn’t lose it because I worry that if I did, I’d get addicted to doing that again and would take it too far and become unhealthy.


For so long it had been abused by others and then I had abused it myself with cuts and overdoses, and all sorts of other things. So, going into mental health recovery meant learning to appreciate my body, and how to take care of it to say thank you for getting me this far because my body has had ample opportunity to give up on me over the years!


These days, I recognize that my body is different to how it once was but I now know that coming off my medication makes me so unsafe that I’d rather have gained the weight and be alive than be underweight and yet suicidal.


You can buy five varied badges for £5 here:


You can buy the ‘refuse to sink’ bracelet for £6 here: