A LETTER TO YOU | I’M NOT DISORDERED’S UPCOMING BIRTHDAY!! 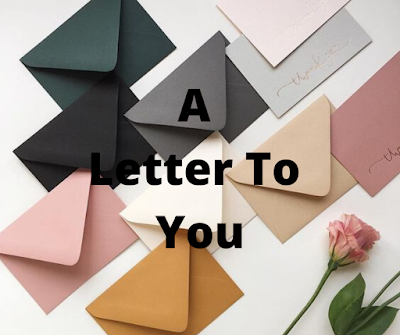 With I’m NOT Disordered’s seventh Birthday just around the corner (January 6th), and the blog post to celebrate scheduled, it felt only right that I write a little something for you all!


To those who use my blog to feel less alone,


I’m so, so, sorry that you’ve felt alone in the first place – I know what an awful feeling that can be, so I really appreciate that I’m NOT Disordered helps you to feel understood and validated.


Loneliness in mental health is – sadly – a common feeling because our thoughts often lead us to believe that no one else has ever experienced what we are going through and in doing so, we’re left thinking that no one could ever understand how we feel.


When I was abused in 2006, there was very little in the media about rape and sexual abuse and the little sexual education I’d done at School, had been the traditional teaching of how-to-put-a-condom-on-a-banana! So, when the abuse began, I didn’t even know what it was called; never mind know that anyone else had ever been through it! And not knowing others had experienced abuse, meant that I didn’t know it could be survived – that you could come out of it ‘ok’. I didn’t realize that it would end; never mind that it could impact your mental health – let’s be honest, there wasn’t a whole lot in the media about that either – or that you could also come out of it stronger than ever! Perhaps if I’d known this, I might have felt better placed in speaking up against the abuse and reporting it the second it started and not two years later!


Of course, there’s the obvious quandary about how it helps to know you aren’t alone, but it can also be so saddening to hear of others experiencing the same horrific things as you. I guess you have to weigh up how much it helps you and how much it saddens you. But another drawback to hearing that others have gone through something similar to you is the possibility that it will lead you to making comparisons and will influence your perception of what you’ve gone through and your coping skills around it. That you’ll be left feeling that you should be coping better with your own trauma because the other person’s is ‘worse.’ That you might lose sight of why you should report any abuse because you think that the other person’s experience was more ‘serious.’ And that you could lose any hope that there’ll be anyone left who hasn’t experienced some sort of abuse.


Hopefully, my blog finds the balance between these things! It’s so important that abuse and mental health are talked about because it does no good for people to bury their heads and attempt to pretend that these things don’t happen in the world.


To those who use my blog for education and insight,


Whether you’re attempting to support someone else or if you just want to better your knowledge for yourself or for a prospective career, then thank you for regarding, I’m NOT Disordered, so highly in its potential to do this for you! I’m a great believer in education being the answer to getting rid of mental health stigma so I hope that if my blog can be seen as educational then maybe – just maybe – that means that it’s also helping rid the world of stigma!


These days, there are so many more professionals than specialist mental health ones who are becoming involved in mental health – especially crisis e.g. Police and Paramedics and it’s a common belief that there just isn’t enough training! When Northumbria Police asked me to help train their new recruits, I felt so reassured that it would mean a heightened chance that the  mistreatment and poor care I’d received by Officers when I was in a mental health crisis, might  not happen to anyone else. I loved the thought that I could be a part of the reason for that change! I guess that with the amount of suicides on the rise and the calls to the Police regarding mental health crisis more than doubling, it was about time that they owned the fact it was now part of their job. Of course, it’s wrong that it has become that way because of budget cuts and staff reductions to the specialist mental health services who are usually best placed to help in those situations.


Another set of people who are now more involved in the care of someone in a mental health crisis are the medical profession e.g. Doctors and Nurses, particularly in Accident and Emergency departments (A&E). Again, with budget cuts to mental health services, more and more people are being advised to attend their local A&E if they are struggling or are feeling unsafe, as it has become – for the most part – the fastest way to receive care in a crisis – whether the care is appropriate or not is a completely different matter! Over the years, I’ve found that in the majority of hospitals (there are four near where I live), you’re  treat very differently when you are attending A&E for a mental health related reason as opposed to when it is a medical problem. I think that the majority of rationale behind this is a lack of education, because not only does it lead to stigma, but it also leads to fear. I  think  that a  lot of  medical  professionals  are  so unsure with what they’re doing  when it comes to mental  health that they  instead become very  defensive  and  judgmental about it; and It’s not uncommon to be told that those patients in A&E  for a medical reason are more deserving of a bed than you and your suicidal thoughts.


One of my very original thoughts behind starting I’m NOT Disordered was actually to give my friends and family an insight into my mental health, because for so long, I’d kept my struggles a secret from friends, and especially from social media. So, when I was admitted to a psychiatric hospital over 100 miles away from home and warned that the average admission there lasted eighteen months, I realized that I couldn’t keep quiet anymore… Largely because I could think of  no lie to explain why I was living so far away for so long! I hoped that in writing about what I was going through in hospital so far away from everyone I knew, maybe they would all still feel connected to me, so that when I was eventually allowed home, I wouldn’t be left with no one. I also hoped that it would provide some sort of explanation for my behaviours such as cancelling plans to meet up, being sad on days out, or even just being absent from Facebook for a while! Being more aware of what I was experiencing also helped my friends and family to be better placed in supporting me because they had some understanding of how I was feeling and what helped when I was feeling that way.


I love the thought that there might be other friends and family out there who are using my blog to be better placed in helping a person they care about. Of course, professionals are brilliant in mental health recovery, but you can’t beat having at least one good friend or family member who is there for you unconditionally and not just Monday to Friday, nine to five!


To those who use my blog for advice, support, and inspiration,


I’m honoured to think that there are people looking to I’m NOT Disordered in the same way that I look to other blogs/bloggers e.g. InTheFrow and Zoe Sugg.


It took me quite a while to decide to do proper advice posts on here; partly because when I first began blogging in 2013, I was in no place to offer safe and healthy advice. Back then, I think I was still of the mindset that self-harm and suicide were sometimes the answer or even that they could be beneficial when you’re struggling. No matter how many times I dealt with the negative consequences to self-harm or suicide attempts, the tiny bit of relief that they always gave me was so much more important and powerful to me that it meant I continued to do both.


I’m constantly being asked ‘what changed? What led to your recovery?  What made you stop doing it?’ I’m afraid, I still don’t have a straight-forward answer though. There were two huge influences on my willingness to co-operate with the hospital staff and I once made the mistake of  telling someone one of those things and she went on to try and cause that situation (a very  risky, and unsafe one) to happen to her. I guess that like many people with mental ill health, she was desperate to feel better; so desperate that she would do anything to make recovery possible.


Her doing that taught me a lot though. I learnt that rather than talk about why things got better, I should instead tell people how I maintain the good days. Telling you  what  the turning point was doesn’t  help  you because I completely believe  that it  takes something different for each person and if I were to tell you what worked  for me, and then it didn’t have the same impact on you? Well, you’d be left feeling even more hopeless, wouldn’t you? This is also possible for the safe and healthy coping skills I now share and it’s another reason why it took me so long to share what I have learnt; but trying them, won’t put you in danger.


I’ve also had to learn to put faith in you all; to trust that you’ll all take responsibility for how you  choose to interpret my advice and tips and  that if something were to not help, then I can’t hold myself to blame. I’ve managed this thought process through the recognition that if my advice can help at least one person then it’s worth blogging it. I also like to think that the content of my blog is something that I would’ve liked to have available when I was struggling.