HOW TO COPE WITH FEELINGS OF ABANDONMENT 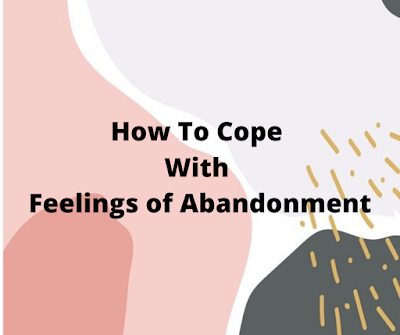 ‘Do you have an intense fear of being left alone, which causes you to act in ways that, on reflection, seem out of the ordinary or extreme, such as constantly phoning somebody (but not including self-harming or suicidal behaviour)?’

When I was first diagnosed with Borderline Personality Disorder (BPD) in 2009, the diagnostic criteria were that you answer experience five out of nine symptoms. These symptoms are unstable relationships, losing a sense of self, engagement in impulsive activities, suicide attempts or self-harm, severe mood swings, feelings of emptiness, intense anger, hallucinations or ‘disordered thoughts’ and finally, a fear of abandonment. (Note: Please don’t use that list to self-diagnose, always seek professional advice.)

I rarely blog about my family because I respect their privacy, but my Father is a huge reason why my fears of abandonment are so overwhelming and intense. It’s actually a bit cliché though; my parents divorced when I was a baby, and when my Mum and I moved away my Father never once tried to contact me. I would never say that I missed out on anything though – I mean, you can’t miss something you’ve never had(!), but I do wonder what it would have been like. What my life would have been like.


At the same time though, I am full of admiration for my Mum being a single-parent and raising me the way that she did, and I hope to one day be as good a Mum as her!


Having no Father in my life sometimes upset me growing up because all of my best-friends had their Dads in their life and I think that when you’re young, any remote feelings of being different to everyone else can be crippling. Not only because it definitely makes you vulnerable to bullying, but also because an awareness that you’re different can very easily lead to feelings of inferiority. I certainly blamed myself for my Dad being absent even though I’d been just a few months old when the divorce had happened; I felt to blame for him failing to keep in touch and actually want me in his life. I wondered what I’d done wrong to deserve that and thought that perhaps there was something wrong with me to have caused someone to make such a decision as to cut their Daughter out of their life.


It took me years to realize that it wasn’t my fault at all, and that my Dad’s decision had more to do with him being to blame than it did me. I guess that it was harder to think like that though, because how do you hold someone accountable for what they have – or haven’t – done to you if you can’t make contact with them? How can you find out their rationale for it? How can you come to understand everything when you can’t find out about any of it?!


When I was typing this post, I was a little bit worried halfway through it that readers would be thinking ‘she’s using her Dad leaving as an excuse; parents divorce all the time.’ But there’s two things to be said for this. The first, is that the way my Dad went about his leaving the family isn’t an ‘excuse’ for anything I do, think, or feel; that implies that I take no responsibility for my behaviour but of course I do! I’m talking about this as it’s a rationale to some of my behaviours. It’s a motivator. It is what drove the times when I would push people away in order to prevent them from abandoning me. It’s why I used to be insecure with friends who’d naturally – but in my mind unforgivably – drift away from me.


Secondly, yes - with 7.5 divorces per heterosexual couple – divorces happen a lot in the UK; but that doesn’t diminish it happening in my life and to my parents. It’s one of my pet hates when people undermine what someone is going through my comparing it someone else’s hardship. Instead, I think it should be acknowledged that what a person is going through is the hardest thing in their life.

And this links into my next experience of abandonment; being judged by others for my openness about my mental health. A few people – who I believed to be important – sort of disowned me when I started blogging and talking to the media because they felt insulted that I hadn’t confided everything in them rather than a ton of strangers. I get it. I do. But those people didn’t even begin to understand things from my point of view; they didn’t realize that – for me – it’s so much easier to talk to strangers than it is to tell my friends and family the ins and outs of the abuse I went through or about my suicidal thoughts.


So, here’s five tips on how to cope if you’re experiencing intense and overwhelming fears of abandonment:

1.      Rationalize the situation – just how much of the ‘abandonment’ is your responsibility?

2.      Surround yourself with people who will help you to stay safe and healthy

3.      Don’t be afraid to end relationships that aren’t helpful to you

4.      If you are feeling abandoned, then talk to someone to get proper help and support