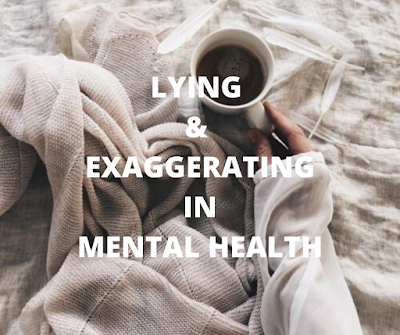 
The inspiration for this post came when I was in Accident and Emergency (A&E) after my EPL tendon repair snapped (to read about the surgery, go here) and after being given painkillers and an emergency appointment at the Plastic Surgery Trauma Clinic, I was on my way out when I overheard a conversation… A girl had told her friends and the Doctors that she’d taken an overdose but – to one side of the waiting room – the Doctor told her that her blood tests had proven that she hadn’t; and after admitting to the lie, the Doctor asked her to leave the hospital. Outside the doors, her accompanying friends then promptly ripped her to shreds (verbally!), shouting that she was a liar and that they had wasted their time sitting with her in A&E.


Now, I feel like there’ll be three schools of thought on this one… There’ll be people who agree with those friends and think that the girl is disgraceful for lying about something like that. There’ll be others who think that the focus shouldn’t be on the lie; it should be about why she told that lie and the attention put into supporting the girl. Finally, there’ll be people who are balanced and can see the truth in both of the previous two thought processes. Me? I think I’m going to be pretty balanced on this one – something which might surprise some of you who know that overdosing is something I have experience of. Maybe that makes me more entitled to be angered by the lie; the fact that I have actual experience of the horrors of overdosing – the shame in telling others what you’ve done, the physical side-effects of anti-dote treatment, the subsequent mental health reviews…

There was one occasion when I actually was accused of lying; an A&E Consultant told me that they knew my ‘game’ and that my blood tests had come back with zero paracetamol in them. I told them to do the test again and asked why on earth I would lie about something like that; they told me that they got it all the time from people wanting attention and who wanted to be hospitalized for many different reasons. So, he went away and when he reappeared, he was full of apologies for mixing up my blood tests with some poor other lady who had almost been treat for a paracetamol overdose! Looking back, I really could’ve caused a huge problem for them and created a bit of drama, but at the time, I was more grateful for the apology and the acknowledgement that they’d been wrong, and would now treat me as well as I deserved – as well as everyone deserves (no matter how many lies they may tell!).


I think that because there are so many tests in caring for your physical health, it makes lying in that respect a whole lot harder because it can so easily be disproved. Mental health, on the other hand, is so much more about trusting what a person says because there’s so many less evidentiary support facilities for it. Instead, you must trust in the professionals – the Psychologists, Psychiatrists, Nurses, and Support Workers – and their vast experience, to pinpoint when someone is being dishonest. But, relying on a person’s opinion, just leads to an inconsistent care and response. I’ve overheard professionals argue over their decisions as to what to do with me before when some have believed I was hallucinating and have wanted to section me, and others have thought I was lying and decided they should just let me go home and leave me to my own devices. Mental ill health makes you really vulnerable and so having the ‘experts’ question one another on your care, is actually really scary because you’re sort of relying on them to have the answers and not what to do to help!


I’ve been lucky in that I’ve only ever been accused of lying about two or three times, and the aspect I was most bothered about was around the abuse; and that happened once. I spent the entirety of the abuse (six months) worried that I would be accused of lying if I ever told someone about it and when I did finally tell someone and was called a ‘manipulative liar,’ it silenced me for another two years. I think that this shows the power a person’s response holds and the impact it can have on the person who is being disbelieved and questioned.


Is that the fault of those giving the response or of the people that may have caused their mistrust? I mean, does the media’s portrayal of controversial things like self-harm, suicide, and abuse; affect our trust in those who talk about experiencing them? There are so many stories out there about false accusations of rape and abuse, and the sensationalist stories about fans being abused by celebrities have put a whole new spin on things. Where the incident is with a celebrity, the victim’s motives are questioned with accusations of them making the claim either for financial compensation, or for a few seconds of fame. I think that these stories, have morphed into a generalized view of wondering what a person has to ‘gain’ by accusing someone of committing such a horrific crime.


The other school of thought that I talked about at the beginning, was that of wondering what has gone on in that girl’s life to make her want to lie about things like this. Everyone has some motivation and whether you think their motivation is ‘valid’ or worthy of their behavior, you shouldn’t judge it. I think that the part of me who holds this thought process is the part that tried to ‘show’ others that the abuse was happening. When I didn’t think that I could ‘tell’ anyone with words, I think that ‘acting out’ became my way of shouting from the rooftops that I was being hurt and needed help. My Mum knew there was something wrong, but I maintained my terrified silence and didn’t speak up. Some people might say that I brought the duration of the abuse on myself because I could’ve stopped it in that moment when my Mum asked me; ‘is someone hurting you?’ and to be honest, I believed that. I believed it so much that I wanted to die at the thought of being in any way to blame for what had happened to me and so I realized that I’d have to let go of that belief in order to stay safe.


Trying to draw attention to the fact that the abuse had happened has probably meant that when I see someone engaging in the behaviors I used to, I do wonder if there’s more to it. A situation where this is particularly true is when I see someone drinking copious amounts of alcohol, and I wonder whether – like I was – they’re trying to block out some horrible memories.


I think that in general, those who lie, impact those of us telling the truth because they have knocked the confidence of others. That girl who lied to the Doctor about overdosing will probably have now made that Doctor doubt anyone who comes to her after having overdosed. And the girl’s friends might have lost trust in her and might now question anything she ever says. It’s sort of like state benefits in that there’s been so many people lie and ‘fiddle the system’ that now, those of us who are genuine, must jump through hoops to prove that we are; and having to prove yourself – in any situation – is upsetting and difficult and, if anything, can actually worsen your mental health!