“STOP TELLING ME TO TAKE A BATH!” | WHAT TO DO WHEN THEIR ADVICE DOESN’T HELP 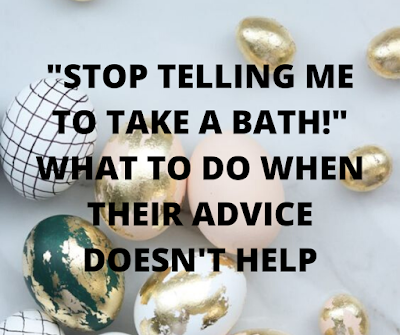 I don’t think it’s an inside joke anymore that the Crisis Team and other mental health professionals all too often say “try taking a nice, relaxing bath” when a Service User makes contact with them to get help and advice while struggling with their mental health. I think it’s kind of common knowledge now. I really hope though, that people don’t see this as professionals being ‘useless’ but more about them either not knowing what to say, or their advice just not being all that helpful to the person. Does that render them useless? Not entirely!


I was admitted to a psychiatric hospital the first time I took an overdose and so I saw a lot of very poorly people; and being 18 at the time, they were much older than me and it made me wonder if that was going to be my life. Was I going to still be in there at their age? My desperation to avoid this happening meant that I took all of their advice and tried everything they suggested – baths, medication, watching TV, calling Samaritans, writing, reading, doing arts and crafts… After a while, though, the hallucinations got louder and clearer and the memories of the abuse got more vivid and overwhelming. Things were getting worse and I felt that I was at a point where I was beyond help. I’d lost hope.

Giving advice and offering support can actually be a dangerous business because what do you do if the help that you’re trying to provide someone isn’t good enough? How will it feel if it doesn’t work? How will that person feel if what you’re telling them will help, doesn’t help? How hopeless will they become? I guess that’s what happened to me; when their advice stopped being efficient; I became hopeless. I thought that if nothing they could suggest would help then what was left? Why wasn’t it helping? In my poorly, suicidal mind; I thought that it was a sign – a sign that I should be dead. That I should kill myself.


The fact that things got worse but they continued to suggest baths etc. also made me question whether they were even taking me seriously when I’d tell them I felt suicidal because if they understood – if they could appreciate just how hard it was – why the hell would they tell me to take a bath?! How could they possibly think that something so… so simple(!) could stop me from being so overwhelmed by suicidal thoughts?! I guess that was the crux of it; it wasn’t that what they’d said had been useless, just that it didn’t feel adequate enough to make a difference.


It felt completely disproportionate to how much I was struggling, and it made me question the professionals’ judgement. I didn’t trust them anymore. I mean, they were meant to know what they were talking about and yet they were getting it so wrong with me! If the professionals couldn’t help, then what hope did I have that I’d ever get better and that the hallucinations would stop, and I’d learn to cope in a much safer way with the memories of the abuse? The thought that I might never get better was enough to lead to the suicide attempt that left me on life support in Intensive Care! I felt beat, and I was so completely drained from the effort it had taken to follow the professional’s advice that I had no energy left to fight for my life and to survive. The last thing I said to the staff in Hospital before they put me in the coma to go onto life support was ‘I hope that something goes wrong and I die anyway!’


I don’t think I only said that out of defeat though. I think that if I’m honest, part of it was pure spitefulness. I was so angry with everyone I considered to be a ‘professional’ and one of ‘them’ – I felt that they’d failed me and that it was they who refused to accept responsibility for their actions. I thought that if their advice not working led me to make an attempt on my life then they should have to accept that they had played a hand in it rather than fight to save me in – what I believed was – a bid to save their own skin! My thought processes were so skewed by my mental illness that looking back, I don’t recognize myself. I struggle to believe that I was the person who blamed well-meaning individuals for my own suicide attempt! I’d like to think that, also, the people who truly know me would vouch that this attitude doesn’t sound like me at all! This is the power of mental ill health; it can twist you up and spit you out until you’re so bent out of shape that you don’t even recognize yourself.


When I was woken from the coma and taken to a specialist psychiatric hospital, I was faced with the enormous – and seemingly impossible – battle of meeting new professionals and having to find the trust that I’d lost from all of the bad experiences with other ones. I had to learn that I couldn’t tarnish everyone with the same brush; professionals are individuals and are only human at the end of the day. So, it’d be unfair to write them all off! I also learnt that I couldn’t unload the entirety of the blame and responsibility onto them. They couldn’t shoulder it. And they shouldn’t have to! They had to accept responsibility for their poor and inadequate advice, but I had to accept responsibility for how I coped with their inadequacies. Of course, I didn’t choose to cope the way I did; the whole point is that I felt I had no choice because the alternatives the professionals were providing me seemed – and were rendered – hopeless!


Learning to trust new professionals and finding the courage to try their suggestions from Dialectical Behaviour Therapy (DBT) coping skills, was hard and it took about a year for me to finally start co-operating and accept that if I continued not to, then I might never get home. I managed to make this change – largely – by adopting the attitude that if I tried their advice and it didn’t work at least I could say I tried not to after I’d end up self-harming. I was so convinced that their ways wouldn’t work that I thought of them as merely a delay to me self-harming but, in the end, that bought me time. Time to see that the distressed feelings would pass and that some of what they were recommending I do, did actually work for me!


Just because I came to be in recovery from Borderline Personality Disorder and was discharged from hospital after two and a half years, it didn’t mean that the professionals always got it right for me. It was just that I learnt ways to cope better when they got it wrong…


Firstly, I learnt to stop being afraid to tell them that what they’d said hadn’t helped because I realized that without pointing it out to them, they would continue to make the same mistake with me. If they didn’t realize that telling me to take a bath actually made me feel worse then why would they stop saying it? And if I didn’t tell them the truth then that took away any potential that was there for them to be beneficial. In short, it would help them to be better placed in helping me. And, in fairness, the reaction of professionals when I was honest with them was always spot-on and I know this won’t always be the case for everyone but it gave me confidence that they were eager to learn from their errors and did actually care about ensuring they didn’t get it wrong again. Telling them often resulted in notes or care plans being added to my records to tell anyone new to my case, the things that I found unhelpful.


I found it hard to be honest and tell them when they’d upset me because I was so scared that I would tell them everything and they’d take no notice and do it all again the next time I spoke to them. I worried that I’d put myself out there and it’d all be worthless and pointless. I changed this attitude by considering the fact that at least I’d be able to say that I’d tried. At least my conscious would be clear and I couldn’t be blamed – that sounds a bit selfish, but it was the safest thing to believe and it was only until I learnt – and realized – that I could trust the professionals in taking on board my feedback in a positive, healthy, and constructive way!

Another way I coped when their advice hadn’t worked was with the realization that I knew myself better than anyone and with that knowledge, I should be able to come up with a list of healthy coping skills that I knew would help. It was actually a perfect solution because not only did it mean I’d have a whole toolbox of more robust alternatives to self-harming, but it also meant that because I’d come up with all of them, I’d have taken responsibility for ensuring my own safety. Being very keen on maintaining control of my life meant that the idea of this was very appealing and reassuring for me. It also meant that I felt that I could appreciate the alternatives more because they were of my own creation.

1.      Try not to let it stop you from seeking help and support from other people/professionals

2.      Try not to feel that their failed advice should take away your hope for recovery
Newer Post Older Post Home