For those who are new here or have missed my previous posts on it, in December 2019, I tore my EPL tendon in my thumb while opening a bottle of Prosecco on Boxing Day(!) and had to have emergency surgery. I then accidentally tore the repair and have been set to have a tendon transfer surgery (where they take some of the tendon from my index finger and use it in my thumb) ever since -  you can read about how I’m coping with the prospect of more surgery here. 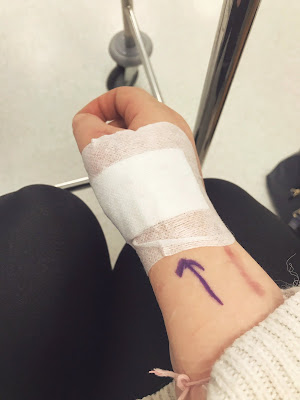 My second surgery hasn’t just been postponed because of the lockdown though, my Surgeon is of the mindset that they need to get my thumb into as good a condition as possible before operating on it. So, until the surgery, I’ve had to learn how to cope with the pain and until the night of the 7th (of May), I was managing with painkillers and my physiotherapy exercises. On the Thursday night, though, I got the most incredibly overwhelming pain in my thumb and out of pure desperation, I decided that I literally wanted to just cut it off! Looking back, of course that seems like a… ridiculously stupid idea but at the time, I was just so sick of the pain that I was willing to do whatever it took to make it stop. I’ve been in physical pain before and have never self-harmed because of it, so I just hope that this illustrates just how bad that initial pain was. On the other hand, I’ve self-harmed a lot as a result of psychological and emotional pain so maybe I shouldn’t be all that surprised that I had turned to it as a coping mechanism for this physical pain.


What did surprise me, though, was the actual injury. I actually swore when I saw it and I panicked because in all the years that I’ve self-harmed, I’ve never had a cut that bad before!  It did have the desired effect though in distracting me from the initial pain but only because it hurt so much more! So, I called a taxi and went to my local A&E. I expected some stitches and maybe a forced conversation with the mental health team; so, I was completely caught off-guard when the Doctor said he’d have to ring Plastic Surgery at another Hospital. It was an even bigger shock when Plastics came back and said I needed to go in the next day for surgery! Fortunately, the mental health team agreed that the incident hadn’t been self-harm because of my rationale behind it so that meant I didn’t need to speak with them.


So, on the morning of Friday 8th May, I went along to the Plastics Trauma Unit at another Hospital and saw a Surgeon who diagnosed that I’d severed the Radial Nerve and admitted me to a ward to have the surgery that day. Unfortunately, they had a number of surgical emergencies, so I was kept in overnight and had the surgery on the Saturday. On Saturday morning, though, a new Surgeon came to see me and told me that the Surgeon who would be doing my tendon repair might delay doing it because she’d be worried that I’d cut again and hurt it. I told the ward’s Sister what he’d said and when she confronted him about it, he told her there’d been a miscommunication and that I had misunderstood! Deep down, I knew I hadn’t but accepted what he said and stopped crying. Then, whilst in the midst of operating on me, he made the comment again: “if it were me, I’d not operate on you because you’re only going to cut again!” I told him that I appreciated all he had done for me that day but that I didn’t think he should speak on another Surgeon’s behalf and worry me about something that might not happen! He told me that he knew the Surgeon better than I did so he would be right in predicting what she will say! 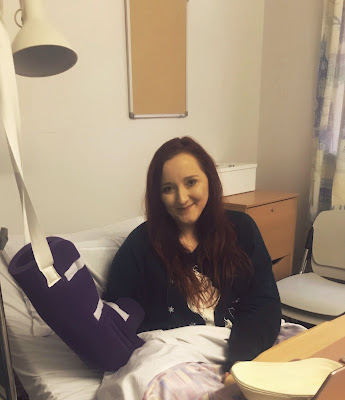 As I was wheeled out of theatre, I shouted thank you to him and then burst out crying. One of the four theatre Nurses who’d been in with me asked if it was because of the Surgeon’s ‘insensitive comment.’ I was pleased that I have witnesses and that everyone I’ve spoken too has agreed that what he said was out of line and spiteful. One Nurse said that it was ignorant of him to hold a stigma against mental health and a Healthcare Assistant pointed out that if a smoker were to get lung cancer, the Hospital wouldn’t refuse to treat them on the assumption that the person is just going to continue sm0king or the belief that it means they brought this diagnosis on themselves. So why should it be the case for mental health? There’s also the fact that the actual mental health professionals have said they wouldn’t deem this as self-harm so…


It wasn’t just that he was assuming what another person might decide, though, there was also the fact that he was saying that he believes I’ll continue to self-harm. It left me feeling hopeless because you’re supposed to trust the judgement of Doctors and healthcare professionals so it left me thinking ‘well, if he thinks that then it must be true!’ Keeping faith in mental health is challenging but when a professional doesn’t seem to have any faith in your abilities then how are you supposed to find it in yourself?!


I remember in 2009 when a Psychiatrist first diagnosed me with Borderline Personality Disorder and the Community Psychiatric Nurse I had at the time, said we were going to ignore the diagnosis for a while because as soon as they gave me that ‘label’ it would be a ‘death sentence’ in that no services would offer to, or be able to, help. That was such a scary thought because I actually found having a diagnosis helpful because it led me to believe that there was a name for what I was going through and that I wasn’t alone in my experiences. So, to be told that the label for what was happening to me was really debilitating, was a scary prospect that left me feeling pretty uncertain and reluctant to continue co-operating with my mental health team because I worried that telling them more would leave them more reluctant to help. It was so difficult because it’d taken me two years to report the abuse and two weeks to tell someone I was hearing voices, and I overcame these challenges because I had hope and faith in the professionals – whether that be the Police, Nurses, Doctors… I hoped that they’d know what to do and be able to help me. So, to have them question me and my chance of recovery was disheartening and offensive.


However, a good thing about this has been that I really appreciate and respect those who do believe in me and who are convinced that I have a future and that I can do well, so much more. Of course, my Mum has been the one constant in my life who has always had faith in me and seen my potential, and her support means a great deal to me, but it’s a lot different to have a complete stranger say that they believe in you. Which is why I’m extremely loyal and passionate in my collaborations with other organizations because they have put faith and trust in me to represent their company image and have believed that I have the potential to do a good job in their partnership with I’m NOT Disordered. Having organisations believe in me and my blog bolsters my confidence and passion for blogging and really encourages me to continue working hard to better my content and secure more collaborations and responsibilities with charities and companies at events, meetings, and conferences. 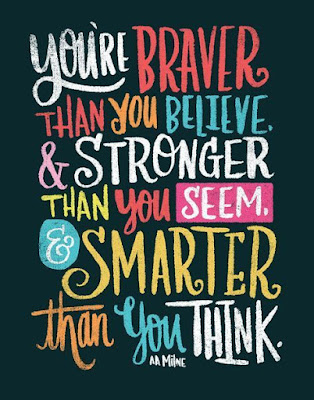 Feeling that others believe in your potential isn’t just about providing you with confidence, though; it’s also about motivation. Having someone say that they believe you can recover and keep yourself safe can provide you with motivation to continue working hard at resisting acting on urges to self-harm or commit suicide. If you’re in a good position mentally, someone saying that they don’t believe you can get better can also be a positive motivation in that you can adopt the attitude that you want to prove them wrong. Fortunately, that’s mostly how I feel with the Surgeon’s comment that I’ll continue to self-harm. I say ‘mostly’ because there is a part of me that feels hopeless and also angry. I’m angry that he has ignored the mental health team’s assessment that it wasn’t self-harm and when I read my discharge summary and saw that he’d written that my wound was caused by ‘DSH’ (Deliberate Self Harm) that anger intensified. Even though it hadn’t been self-harm, it annoyed me that he’d used the ‘deliberate’ modifying when talking about it. Looking it up, deliberate is defined as doing something consciously and carefully; and I don’t think you can make the assumption that everyone who self-harms does so with those qualities. I completely understand taking responsibility for your actions and dealing with the consequences of them, but I also believe that there should be a level of understanding that a person self-harms because they feel there’s no other way to cope. Nothing else would be efficient enough in dealing with what they’re experiencing.


I think that it’s also important to recognize that telling someone you don’t believe they can recover can be so detrimental because that person is most likely already worrying about that prospect. A lot of people with mental health problems have the conviction that things will never get better or that they won’t even ease just a little bit. That’s sort of the point in suicide – that a person attempts it because they can’t see a light at the end of the tunnel. Can’t see a purpose or a hope that anything will improve. So, to tell someone who is already vulnerable to that way of thinking that you pretty much agree can literally be life-threatening. I honestly believe that the Surgeon is very lucky that whilst I very much believe that what he said was entirely wrong and unnecessary, I’ve turned it into motivation to prove him wrong. I’m also kind of grateful that he said it to me – obviously he may have had this attitude towards mental health with others and they haven’t spoken up, so I’m glad he’s now made the comment to me – someone who will stand up and say that it was wrong of him. It means that in doing so, maybe he’ll learn that it was wrong and won’t continue to make such comments to people who might be more vulnerable in believing him.

Finally, some advice, if you feel that you’re losing hope…

1.       Listen to a positive, motivational song and find inspiration in the lyrics

2.       Talk to someone who does believe in you and listen to their words of encouragement

3.       Make a list of all the things you enjoy and your achievements to show yourself that there’s reason to have hope

4.       Speak to a professional for more helpful tips in coping and finding the light at the end of the tunnel

5.       Please know that if someone makes a similar comment to you, they’re wrong in doing so and that you are well within your rights to speak up and do all that you can to prevent it from happening to someone else
Newer Post Older Post Home