EVERYTHING YOU NEED TO KNOW ABOUT WASTING TIME IN MENTAL HEALTH 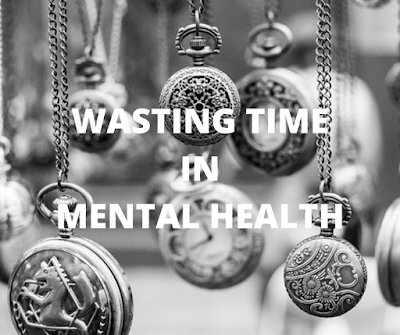 It might still be a few months off, but I feel like my Thirtieth Birthday is looming and with it, my need to justify what I’ve achieved so far in my life. And it’s inspired this post…

Back in 2007 – when the abuse had just ‘ended’ – I had wanted to work in Law so that I could help others get justice for when they had been wronged. I think I was so passionate and eager to give a voice to those who deserved it, when I felt as though mine had been silenced for the past year. I wanted for others to feel that those who’d hurt and upset them in some way, had gotten the consequences and punishment that they deserved because for so many reasons, my abuser never did.

After my mental health deteriorated during my exams at School, I lost the opportunity to study Law at University and instead, found passion to go into Childcare. I guess that again, I was projecting my own experiences and harnessing them as motivation to work in a particular industry. My thinking behind Childcare was that I wanted to promote that children have a similar, innocent childhood to my own, but that they were also aware of all the things that I hadn’t been; and which hit me like a ton of bricks when I finally experienced them.

Again, though, my mental health prevented me from taking this aspiration any further and before long I was spending the following three years in and out of both medical and psychiatric hospitals worrying that I was wasting everyone’s time. This concern didn’t just come from my own thinking though, I was told this was the case by Police Officers and A&E staff. I think that from the Police force’s view, they were there to fight crime, catch perpetrators, and protect victims; and not to sit for hours on end with someone who was in a mental health crisis. But their legal obligation to have a duty of care for everyone, their powers under section 136 of the 1983 Mental Health Act, and the fact that mental health services are operating on a very low budget with a limited amount of staff has meant that they’ve become somewhat responsible for helping and supporting someone in a mental health crisis. Of course, they aren’t the ‘best’ or the ‘right’ people to do this job and I think that maybe those feelings of inadequacy led to a lot of frustration for Officers who also felt that this wasn’t what they had expected in joining the Police. Inevitably, the frustration was taken out on the nearest person and that person was often me. Except, because I was in crisis, I couldn’t understand or appreciate their side of things and to me, they were just being rude, insulting, and unfair in saying I was wasting their time.

I think that the Police – or at least my local Police force – have come a long way since those days and I’d like to think I’ve been a part of that change/improvement in my contribution to their mental health training sessions and the suicide awareness workshop I delivered solo to the British Transport Police (you can read more about it here). I think that they’ve almost been forced to accept that their job is going to include responding to mental health crises and they have actually paid some attention to the complaints and other feedback they’ve received about the response they’re giving. The one thing I have noticed since they began specialist training, is that now they’re aware of the statistics of the amount of people they are sectioning, they’re doing everything to avoid using that power. It means that instead, they’re arresting people for offences like ‘Breach of the Peace’ and ‘Wasting Police Time’ – offences which may seem applicable but probably aren’t the most appropriate in a genuine mental health crisis.

The other professionals who have outright called me a time waster were A&E staff, who often commented on the fact that I was in the medical hospital because I had inflicted something upon myself e.g. through self-harming or taking an overdose. I guess that it was maybe difficult for some of the staff to help a person with self-inflicted illness or injuries, knowing full well that there are people waiting who are not ‘to blame’ for their attendance at A&E. I once had an Anaesthetist say to me that he ‘should be helping a dying child, not some silly girl who says she’s suicidal!’ When he said it, I was at the point where I’d gained some confidence in knowing my rights and recognizing stigma and discrimination and I turned around and told him that if that dying child died because he’d prioritised helping me, that was on him. I can imagine that some people might think that wasn’t fair of me and that maybe I’d ‘backed’ the Doctor into a corner where he had been almost forced to make that choice...

Somehow, I think that a lot of A&E staff have also improved in their treatment of someone with a mental illness – I say ‘somehow’ because I’m not aware of them having any specific training in the subject like the Police have… So I think that perhaps in their instance, it has been more about mental health being talked about more openly and people having the courage to speak up when they feel mistreated and to put a complaint in when it happens. Being more honest and open about mental health means that professionals are more likely to be educated on the subject and I think that education is the cornerstone to minimising discrimination and stigma against those with a mental illness.

After three years in and out of hospitals, finally, in 2012, I was sectioned under the 1983 Mental Health Act and admitted to a psychiatric hospital over 100 miles away from home for two and a half years. The psychiatric hospital I was in was private and that meant securing funding for me to be admitted there and to stay there for the entire two and a half years it took for my mental health to stabilize. When I found out the lengths mental health professionals had gone to, to basically save my life and support me in building a new one, was challenging because I struggled to see myself as deserving of the help. It wasn’t that I didn’t think I was poorly and that I needed help, just that I thought I deserved to die and wasn’t worthy of all the effort these people were putting in. I mean, why should they work so hard when I wasn’t even bothering to try and to co-operate with them to get better? This query slowly made me determined to put in that effort so that I felt deserving of their help and support.

So with the three hard years in the community and then two and a half years in hospital, that was over five years of my life completely consumed by my mental illness and I had to watch – through social media – my friends being (in my opinion) so much more productive with their lives during that time. I won’t lie; I was jealous. So jealous that on really tough days I’d think ‘how is this fair?’

But I learnt to accept that I had to take some responsibility for how my mental health had deteriorated. Of course, the cause of my deterioration wasn’t my fault; I hadn’t brought the abuse on myself, but I was still somewhat responsible for how I’d coped with it. I hate to say that I’d ‘decided’ to cope that way because if I’d ever felt that I could choose whether or not to self-harm then obviously I wouldn’t. But accepting that the way I’d coped, also meant I faced the debate that the title of this post explains; whether or not I had completely wasted my time/life. I really struggled to think of any achievements I’d had in those five and a half years, yet my friends were all graduating from University and getting jobs!

The biggest comfort to my query around wasting my time though, was when I started to blog and created, I’m NOT Disordered. In the early days (2013) of blogging, I was still in the psychiatric hospital and so I could only do my blog in the evenings when we were each allowed our laptop. My initial aim was to provide friends and family on Facebook an insight into my mental illness and time in the hospital and to have some sort of record for myself, of the steps I would have to take and the effort I would have to put in to reach recovery. I never once intended for my blog to become accessible to so many people (over three quarters of a million readers now) and didn’t even imagine it would ever mean so much to me! I’d love to say that from Day One everything changed but actually, it probably took over a year to change my goals and feelings around my blog. It was when I was discharged from the psychiatric hospital and I realized that I didn’t know how I would create content without the daily dramas of inpatient life, so I stopped blogging. The amount I missed having a space to vent and somewhere I could process my thoughts, feelings, and experiences; was completely unheard of and totally unfamiliar to me! I mean, I had missed my friends and family when I was in the hospital over 100 miles away from them, but this was completely different! I wasn’t missing a relationship or a person… I was missing something which – I hadn’t even realized – my life had begun to revolve around.

Initially, I felt almost ashamed to admit that a blog meant so much to me, I thought it made me shallow and materialistic. Like, there are things in my life that should be so much more important and meaningful. And of course, I still love my friends and family, it’s just that blogging is no longer a hobby or something I do in the evening when I’m allowed my laptop! It’s almost become a career and it’s a passion which I’m fully dedicated to.

The feelings that had come up when I stopped blogging, really helped me to see that all the effort I’d put into my blog posts, hadn’t been a waste of time. It told me that I’d found my purpose in life and I began to feel that maybe everything I’d gone through with my mental health had been worth something. That there’d been a point to it. Or even just that I could gain something positive from my experiences.

There are still moments when I see a friend announce her pregnancy on social media, or a friend buy their first house with their long-term partner, and I wonder ‘what have I done with my life?’ But I know now that everything I’ve been through wasn’t a waste of time.