EVERYTHING YOU NEED TO KNOW ABOUT SELF-HARM | PART ONE “Strength does not come from winning. Your struggles develop your strengths. When you go through hardships and decide not to surrender, that is strength.”

From Day One of I’m NOT Disordered (back on January 6th 2013) my goal in blogging has been to provide insight into mental illness for readers to be better placed to support others, to speak out about their own difficulties, and to lessen the chance of stigma and discrimination amongst those who don’t understand. And I believe self-harm is definitely an aspect of mental health which is commonly shown a lack of empathy by all those who have no experience of it. So, that is my aim with this post – to educate those struggling to comprehend self-harm, to reassure those who engage in self-harming behaviours that they aren’t alone, and to encourage those self-harming to speak up to seek help and support…

Do you really need a trigger warning?

I’ve debated adding a ‘TW’ (for Trigger Warning) to the title of this blog post, but in the end decided against it. I think that the point of a trigger warning is to alert people that what they’re about to read might end up being upsetting and distressing; but if you’re going to read a piece with ‘self-harm’ in the title… surely you will immediately recognize the chance of the content becoming difficult to cope with?

So, I guess all I’ll say is for you to please be aware of your own mental health whilst reading this post and if you feel that you need to talk to someone or get advice in some way, there’s a list of helplines and services at the end of the post which you can just quickly scroll down to where necessary.

“When did this start?” “Does self-harm even have a start?”

Through the many Mental Health Act assessments, I’ve gone through, and the therapy sessions with Psychologists and Counsellors, I’ve learnt that one frequently used type of question is around determining when your mental health first began to deteriorate. I guess this is usually motivated by the fact that having the ability to pinpoint that might also establish the cause for the decline; but to do both of these things, you need to really understand what self-harm is – what behaviours are given that label…

Mind defines it as:

‘Self-harm is when you hurt yourself as a way of dealing with very difficult feelings, painful memories or overwhelming situations and experiences…’

To read more on their information regarding self-harm: https://www.mind.org.uk/information-support/types-of-mental-health-problems/self-harm/about-self-harm/

The Mental Health Foundation defines it as:

‘Self-harm can refer to any behaviour where someone intentionally causes harm to themselves. It can be any behaviour, minor or high-risk, which causes injury or harm.’

To read more on their information regarding self-harm: https://www.mentalhealth.org.uk/a-to-z/s/self-harm

The NHS defines it as:

‘Self-harm is when someone intentionally damages or injures their body.’

To read more on their information regarding self-harm: https://www.nhs.uk/mental-health/feelings-symptoms-behaviours/behaviours/self-harm/why-people-self-harm/

When I first self-harmed…

In 2006, I was attacked by a complete stranger on my way to school early in the morning, and a person in my life used the attack as a way to build some sort of bond with me by offering their unwavering support and attention. But that was just an act. He took that trust and appreciation and abused it. Abused me.

In my fifteen-year-old head, I was convinced that the only person with the right to hurt my body, was me. And to prove this theory true, I took a slightly sharp object and very carefully made a slightly red scratch across my forearm.

What good does finding the cause do?

At the time – in 2006 – I was very aware of my mindset and the belief which had led to my self-harm, but that didn’t make me any more capable of stopping it from happening. I think that the fact the abuse went on to last six months contributed to the length of time I self-harmed for back then. I felt so out of control in what was being done to me that I was desperate to find some control and discovered what I could do to myself.

With recognizing the cause of your self-harm not necessarily meaning it will then just stop, it’s equally important to recognize that having the ability to label the cause could enable a person to get help. If you know why you’re doing something, then maybe you can tell someone who has the power to stop it (in some way) for you. And in doing that, you may be better equipped if there comes a time where you can get help or support.

For me though, I had so many reasons why I couldn’t report the abuse that the self-harm continued until I was finally no longer in my abuser’s place of work. Knowing it was because of his actions that I was self-harming, it seemed to make perfect sense that I could stop now that the abuse was finished. Of course, that didn’t last long because memories of trauma can often be so much more powerful, destabilizing, and important than when it is actually taking place.

So, in talking about having a reason for your self-harm, I think it’s important to shed light and awareness on the fact that these days, social media can be incredibly harmful for a person’s mental health.

In January 2013, when I first started blogging, I saw a post on Facebook about the disturbing, trending hashtag on Twitter: #cut4bieber. In a bid to illustrate the damage self-harm can cause, I wrote a blog post (which you can read here) about the condition of a lot of the other inpatient’s bodies as a result of their self-harm. I talked about how some are needing plastic surgery to mend their wounds in the hope that people might read this and realize that self-harm (alongside many other mental health aspects) isn’t something that should be ‘trending.’ It shouldn’t be something which people do because their favourite singer was caught taking drugs! Now, I recognize that many people have a different reason for their self-harm, and I would never want to minimize or belittle a reason, but this?!

I think it’s also about how constant the negativity can be – a lot about social media is kind of like a bandwagon in that once one person expresses an opinion, a bunch of total strangers jump in and either support it or annihilate it. And having so much technology can leave you feeling like there’s no escape. It’s sad and I don’t think it should be the case at all, but this is why I have the rule that I won’t speak up about controversial issues unless I’m prepared to receive a ton of criticisms and – let’s be honest – abuse.

“It started as scratches and now I need surgery!”

I chose this little comment I made, to open this little bit about how important it is to get help and support because self-harming can very quickly – and perhaps easily – become a whole lot more dangerous and life-changing than it is when a person first starts engaging in this behaviour.

As I talked about earlier, I started self-harming in 2006 with a slightly sharp object and by drawing red scratches across my arms. After a few weeks, I felt myself feeling that my injuries were inadequate in some way. That those red marks didn’t match or equate in any way to the significance of the psychological pain I was experiencing. So, I needed to see blood. Then that wasn’t good enough and I began actually cutting; firstly, I wouldn’t stop until I needed steri-strip stitches, and then it was about needing actual sutures. Then, by 2020, it became about hurting myself so badly that I needed plastic surgery.

It honestly scares me; the thought that something which – yes, was obviously always very unsafe – could lead to so much more danger and harm. I mean if one of my cuts had gotten infected bad enough for me to have developed Sepsis, I could have died… without wanting to.

The danger of self-harming and the possibility of it becoming more unsafe and potentially life-threatening, is just one reason why it’s so important to get help if you do self-harm – or even if you solely have thoughts of self-harming!

I mean, I like to not have regrets because I was taught by the Crisis Team that so long as you learn from something, it shouldn’t be regarded as a mistake and you shouldn’t go on to wish it had never happened. But still, I’m very aware that if I had asked for help – or even if I’d just cooperated with professionals sooner, then perhaps I wouldn’t have ended up on life support… it makes me consider myself to be extremely lucky.

Are we all just attention-seeking?

Attention-seeking is sadly a very regularly used term in connection with the mental health world and the various aspects of mental illness. It’s been a label I’ve previously had stuck to me and my own self-harm or suicidal behaviours. I used to be ashamed and embarrassed to tell people that’d happened because I worried it would ignite others to consider that of me too. Now though, I recognize that after everything I’ve done and been through, it is those who used that label who should feel ashamed and embarrassed because they dismissed me when I needed help. And they should realize that if they hadn’t done that, maybe I’d have got help sooner and I wouldn’t have been on life support after two suicide attempts.

So many people (obviously including myself) use websites and apps like Twitter, Instagram, Facebook etc to talk more openly and honestly about their struggles with their mental health. And in doing this, sometimes this is perceived as attention-seeking because why else would you do that?! As if it’s not about raising awareness, encouraging others to get help and support, and banishing the stigma around talking about your mental health!

I think that when psychiatric services and professionals use the ‘attention-seeking’ line, it’s really ironic because surely, they are the exact people who should be encouraging those struggling with their mental health to speak out and ask for help! And yet they’re making these comments which can – if anything – leave you reluctant to do that.

A controversial reason to get help:

Thinking of your loved ones and how they might feel about your self-harm could be another motivation to ask for support. That they would want you to get help and that it could be really upsetting for them to see you hurt yourself. I say this is controversial because I know a lot of people might say that you shouldn’t live your life for the sake of others…

I just know that I spent a long time feeling unworthy of support, and for me, thinking of others was a reason to seek help. Then, in doing that, I was given the opportunity to talk to a professional and this gave me the time and encouragement to develop a better opinion of myself and to finally accept that a lot of my difficulties (particularly the abuse) weren’t my fault; and that led to the monumental realization that maybe I was entitled to, and deserving of, help and support.

Five tips when asking for help:

1.     Don’t feel pressured by anyone or the media to seek help in a particular way e.g., using a helpline or speaking with your GP.

2.     Ensure you’re in as confidential an environment as possible when you talk to someone about self-harm.

3.     Try to be prepared to feel absolutely exhausted and terrified at the end of your talk with someone.

4.     Know that you shouldn’t be scared or hopeless if a method of asking for help which has helped others, doesn’t help you.

5.     Keep an open mind in so far as the advice s you might receive and the recommendations that might be made as alternatives to self-harm 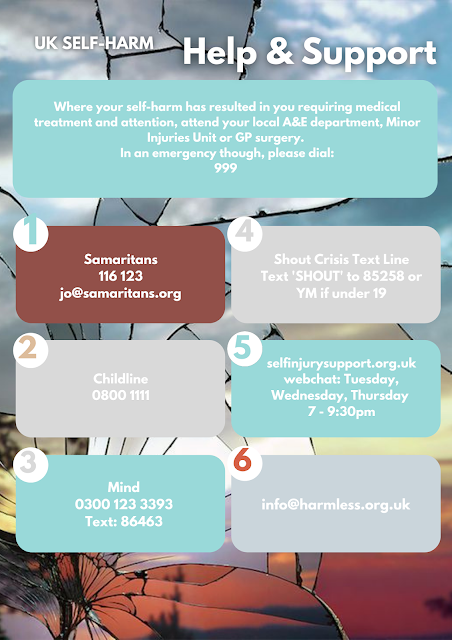