TIPS FOR WRITING ABOUT HALLUCINATIONS | I WROTE A CHAPTER FOR THE PRACTICAL HANDBOOK OF HEARING VOICES – AVAILABLE TO BUY NOW!!!

Let the walls crack, 'cause it lets the light in Let 'em drag you through hell They can't tell you to change who you are That's all I know so far

A good few years ago, I began collaborating with the author of the book Emily’s Voices (which you can buy here), and she asked me to write a chapter for the book she was in the process of writing; The Practical Handbook of Hearing Voices! The book was scheduled to publish a while ago, but the pandemic kind of put a spanner in the works and so I’m really pleased to say, it has been officially published TODAY!! 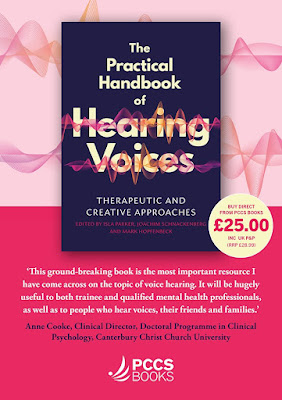 I wrote a blog post for World Suicide Prevention Day with advice for writing about suicide (you can read it here), and its popularity has encouraged me to write this piece in a similar format…

Find a metaphor or expect a lack of empathy

I think that when I discovered a metaphor for my auditory hallucinations not long after creating, I’m NOT Disordered in 2013, it was a real turning point in me feeling understood and that gave me the experience of an overwhelming sense of relief.

Without that metaphor, I experienced such a lack of empathy – which I attributed to the pure fact that no one could understand or appreciate what I was going through. And I believed this was the case because admittedly, even I didn’t understand what was happening to me. I didn’t have the words to form an explanation that I believed would be efficient and powerful enough so that others would understand. That might seem hard to believe considering I’m a blogger and all I do is come up with words to explain things! So I think that not being able to do that, really illustrates just how new, scary, chaotic, and unpredictable things were.

It’s not very common knowledge, but people who hear voices (auditory hallucinations) can hear them in completely different ways. Which means that even though hallucinating is already a very misunderstood and misinterpreted occurrence, there’s the added difficulty that even that can then be unique to the individual!

It meant that the metaphor I thought of might only be applicable to the way in which I hear voices, so I’m not suggesting it’s used by the wider voice-hearing community – I’m just trying to recommend that finding something like this can be so helpful in your care and the treatment you receive from professionals. I mean, when I found this metaphor to explain my experiences, it resulted in me being prescribed an antipsychotic medication and after finding the right dose, my head has been my own for over one year.

So, I used the idea of listening to music through headphones. I think it illustrates that I could hear voices as though they were coming through my ears, but then somehow, they managed to fill my entire head so that there was no room for any other sounds. No ability to listen to any of my own thoughts. I want the metaphor to show just how all-consuming my hallucinations could be. How powerful and omnipresent they were. How much time and space in my head they controlled.

As I said, creating that metaphor was a great tool against misinterpretation – something which is so – wrongly – frequently experienced by voice-hearers.

In the early days of my hallucinations, professionals put a lot of thought into considering me to have Schizophrenia, but then a Psychiatrist asked me questions relating to the diagnostic criteria for Borderline Personality Disorder… When he determined that I matched all nine symptoms (you only needed to have five to be diagnosed) it was like everyone’s mindset changed. Like all of a sudden everyone changed their views of me. Changed their interpretation of my experiences and my mental health on a whole. Suddenly my hallucinations weren’t genuine; they were related to the trauma I had eventually began talking about. And those beliefs around the voices developed into a general attitude that I was simply attention seeking and that all the hospital admissions and Crisis Team assessments weren’t necessary.

Sometimes, I actually wished that to be true. I wished the hallucinations were fake and that I was lying. I wished that I had control over my safety, instead of the voices being so convincing of me self-harming or attempting suicide. But, unfortunately, this wasn’t the case and – in my opinion – because professionals began to doubt me and withdraw care, things escalated, and I began experiencing visual hallucinations. The fear that things were going to continue to worsen and my belief that even if they did, I still wouldn’t get the right help; led to my third suicide attempt which – for the first time – landed me on life support in Intensive Care. 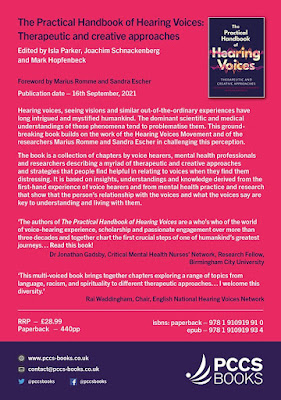 Sadly, it took something that serious for the professionals to sit up and acknowledge my deterioration and go to long lengths to have me hospitalised to a specialist psychiatric hospital over 100 miles away for over two years. And that? That was one of the biggest benefits to my mental health and my safety.

Know you may face stigma and discrimination

Whilst a lot of people attribute stigma to nastiness, I consider it to largely be a result of a lack of education on whatever subject the stigma and judgments are concerning – because this isn’t just true for experiencing hallucinations.

That belief in the lack of education, has motivated me to become involved in assisting and solely facilitating various mental health and suicide awareness training sessions for various professionals – mostly the Police though! I mean, after experiencing stigmatised views and judgmental comments from Officers, I found the ability to recognise that such instances can have a very unsafe – potentially life-threatening – impact on the individual they are aimed at. So, knowing this, I believe I’m so fortunate that whilst these comments have resulted in me feeling even more suicidal or unsafe in terms of self-harm, those instances didn’t result in me dying or becoming ‘too’ hurt. But that’s not really the point! The point is those comments shouldn’t happen because what if the chance they can contribute to a person ending their own life actually happens? What if someone isn’t as fortunate as me?

Unfortunately, the stigma and judgement isn’t exclusive to the Police profession, in fact, I think it’s probably more commonly found in comments online! With that, it isn’t just about a lack of education on the subject, it’s also about those individuals making the comments are able to either remain completely anonymous or publish them under some sort of alias. Either way, they are ‘gifted’ with the power to cause someone great upset and not receive any sorts of consequences for it – because do people who do that really have a conscience?

This stark behaviour and activity online has meant that there’s been a number of controversial issues come up where I’ve had very passionate opinions, but they haven’t been fierce enough for me to be willing to face any judgmental comments. So, in the end, I haven’t felt able to express the opinion, to have my say, or to find and recognise my right that I should be able to speak up without that fear. So, I hope that this illustrates that in talking about hallucinations, I’m passionate and dedicated to doing so.

Focus on a goal or aim

In preparing to face stigma, discrimination, judgments, a lack of empathy, misunderstanding, and so much more(!), a helpful thing to spur you on to continue to speak out regardless of all of those things is having a goal or an aim in what you’re saying.

Having a goal can also help where your writing about hallucinations might affect your own mental health. It’s ironic that writing about mental health can sometimes worsen it, but triggers are important. So, giving a trigger warning in your writing can be helpful for your readers and for reminding yourself of the gravity of the impact it can have.

The reasons why I write about hallucinations:

ü  To raise awareness of hallucinations, the general facts around them, and the way they can impact someone 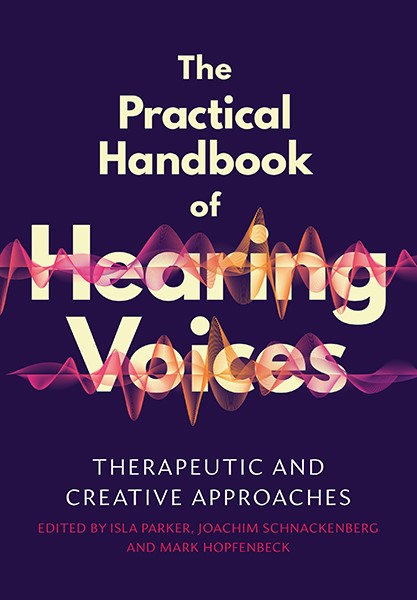