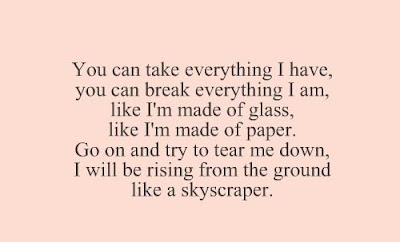 When I first created, I’m NOT Disordered and began my blogging career in 2013, I was an inpatient and had been admitted to the psychiatric hospital because of a suicide attempt. It wasn’t my first – and it ended up not being the last… So, I guess that from the offset, I knew I would end up blogging about suicide…

1.      I wonder what right I have to advise anyone about anything!

2.      What if my advice doesn’t help and leaves a person feeling hopeless?

With the first point, as my reader count has soared, I’ve found more and more confidence because whilst I realise not everyone who reads my posts will like them, I must be doing something right to be almost at one million readers! And that, coupled with my confidence to write advice around mental health (which I’ve found the confidence to do so from my own recovery), has given me the courage to write this post.

The second point is a worry I have which is based on my own experiences of being given advice and it not helping. In those instances, I’ve never looked to the person giving the advice as useless or criticising that they don’t know what they’re talking about, I’ve always looked inward. Looking for the reasons why it’s my fault that the advice wasn’t helpful. As though I was the failure and it was my fault for having such terrible mental health that advice which helped others, was wasted on me!

With that being said and all things taken into account, the thought of the positives and benefits which might come from me writing this blog post, seemed to overwhelm those doubts and concerns. The recognition that if someone were to read this post and find it useful – find it helps them in writing more effectively about suicide – and then their writing go on to inspire and help others, is pretty encouraging.

THE IMPORTANCE OF KNOWING WHAT YOU’RE TALKING ABOUT

I think it comes as no surprise that having some sort of personal experience in the topic you’re writing about, can go a long way in ensuring your piece is effective, meaningful, and accurate. I think that in writing about suicide, this becomes a whole lot more essential.

It’s a common sticking point in mental health that you have professionals dishing out possibly life-changing advice, but they were taught about it in a classroom. They have little to no real-world experience of the things they’re instructing others to do – or not to do. It’s something that’s almost become a key argument for service users to harness when in some sort of battle or argument with psychiatric professionals. It’s like the ultimate mental health knock-down. It’s like putting someone who can be perceived as acting autonomous or superior, in their place.

When you’re writing about suicide, it can be so important that you have some sort of understanding on the subject, otherwise you’ll find people with the same mindset of the above; expressing that ‘you don’t even know what you’re talking about.’ I mean, having someone write about a subject which has a great meaning in your life and is of great importance to you, and them doing so in a naïve, uneducated manner; it can become insulting and offensive. And it’s almost like; ‘what entitles you to write about that?’

For some professionals, challenging topics, such as suicide, become a multiple-times-a-day kind of conversation, which can – understandably – leave a person cold and immune to the impact it would have on someone who usually rarely speaks about it. Kind of like when a Doctor of a speciality diagnoses someone; for that Doctor it’s a daily task, but for the patient, it’s a life-changing moment.

I remember one time I’d attempted suicide and for the first time, my blood tests came back with dangerous levels of damage to my organs, and I was sat crying, when the doctor came over and said, “don’t worry; I’ve heard of worse.” I remember telling him that just because he’d treat patients in a worse state, it didn’t take away the fact that it was the worst attempt I’d ever made. It didn’t mean that I should have less help or support because my case wasn’t the most serious, he’d seen.

Something which isn’t publicly talked about a whole lot – particularly in the media – is the competitive nature that psychiatric service users can experience. And I think the reason this isn’t voiced so much is because those who are actually feeling that way, don’t speak out and so whilst a lot of professionals can ‘guess’ or ‘assume’ there’s a competitive instance, there’s no real proof of a first-hand account.

In all honesty, the competitiveness wasn’t something I experienced until the specialist psychiatric hospital. Mostly, the damaging ‘habit’ was around self-harm – to the point where someone snuck a sharp into the ward and some of the girls passed it around to see who could make the worst injury! Yeah… However, when I returned to the ward after running away from the hospital and making my third suicide attempt which left me on life support, I found so many of the girls asking questions that required more details and information that could support them in doing the exact same thing. And at one point, I was caught out and told one girl something and the next day she’d gone AWOL and I was blaming myself.

So, knowing that psychiatric service users already make comparisons with one another in suicide attempts and self-harm etc, I think it’s essential to keep that in mind when you’re about to do that yourself in your writing about suicide.

IT ISN’T YOUR PLACE TO PASS JUDGMENT OF ANY SORT

Arguably, the greatest judgement to be passed in regard to suicide is that the person who has done it has been ‘weak.’ As though feeling so desperate to escape something that you fight against the natural human instinct of staying alive, isn’t challenging?! As though it doesn’t take some immense determination to stop fighting for your life and start fighting for your death.

When I was younger, the one reason I wasn’t diagnosed with Anorexia was that my menstrual cycle was still occurring; my BMI and everything else fit the diagnostic criteria. So, being very petite, there were a few occasions when a lot of professionals assumed, I’d be ‘easily’ restrained and were surprised to find that on one particular instance, it took six Police Officers to get me to hospital after attempting suicide. I felt that it illustrated just how powerful and fierce mental ill health can be and just how determined a person can be when they feel suicidal.

I think that the second biggest judgement is that the person has been completely selfish in their actions. That rather than consider how much heartache their suicide will cause for their loved ones; they only focus on the relief their death will be for themselves and their own pain. As though no one who commits suicide ever fixates on the belief that their loved ones will be ‘better off’ without them! As though it’s ok to convince someone not to attempt suicide by telling them their relatives would be heartbroken! As though it isn’t more important to gage the cause of their suicidality rather than guilt-trip them!

For me, when professionals (mostly the Police) would say “how do you think your mother would feel?” I would become uncontrollably angry (a symptom of Borderline Personality Disorder, but in this instance, just a slightly invalid reaction!). I was furious and insulted that those people assumed that I hadn’t already considered my Mum; when in fact, I’d thought about her multiple times! And then this comment left me thinking ‘why should I live – go through all the hurt and upset I’m experiencing – for the sake of someone else? How is that fair on me?!’

And finally, the third biggest judgment comes in the belief that a suicide attempt – even a ‘successful’ one – is an attention seeking act. You see/hear it a lot in social media… There was one instance when a train company tweeted that their trains were delayed because someone had committed suicide by jumping in front of a train. Their tweet was instantly commented on with a mixture of responses that ranged from ‘they must’ve been feeling so terrible’ to ‘now I’m missing a meeting!’ The company responded to the former comment with an admirable tweet stating that the followers should remember that a member of someone’s family has died and how can that be belittled by a delayed business meeting?

CONSIDER YOUR OWN MENTAL HEALTH

So, I thought that with me talking about the importance of really knowing and understanding what you’re talking about when you write about suicide, it’s important that you keep an eye on your own mental health. Learning about others suicide attempts or talking about your own can be upsetting and painful; and in order for your writing to be effective, it’s essential that you’re at a good place with your mental health too!

Here’s some tips for staying well through writing about suicide:

1.      Allow yourself to stop writing if the topic becomes overwhelming.

2.      Take time and make the effort to do self-soothing activities.

3.      Try to write about suicide during the day – when support is more easily accessed.

4.      Don’t tell yourself you’ll be letting people down if you realise you can’t write more.

THE REALITY OF LIFE AFTER ATTEMPTED SUICIDE | TW

“JUST BECAUSE YOU’VE SAID YOU FEEL SUICIDAL, IT DOESN’T MEAN YOU HAVE TO ACT ON IT” | HOW IT REALLY FEELS, MY ATTEMPTS, & THE STIGMA | SUICIDE PREVENTION DAY 2019

AN IN-DEPTH LOOK INTO AN OVERDOSE | WHAT I THOUGHT, HOW I FELT, & WHAT HAPPENED

HOW IT REALLY FEELS TO BE SUICIDAL

TW: A DISCUSSION ABOUT SUICIDE | FROM THE WARNING SIGNS TO THE STIGMA

10 Things You Should Know About… Feeling Suicidal