EVERYTHING YOU WANT TO KNOW | MY FAQ’S 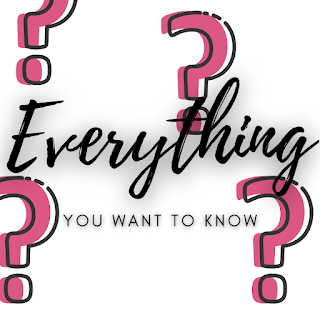 It would probably come as no surprise – given you can see my number of readers (those numbers on the right hand side) – to tell you that I get a vast number of emails and messages across my social media every day. In all honesty, when it first escalated, I would stress myself out trying to give an efficient, speedy response to absolutely everyone. I pressured myself and thought that if all these people had taken the time it sit down and write a message for me, the least I could do was reply! I noticed this mindset wasn’t helpful for my mental health and decided that I would acknowledge the emails and occasionally give a brief response where necessary. But I soon got the distinct impression that I was repeating myself. A lot. So, here are my answers to my more frequently asked questions…

I was firstly diagnosed with Borderline Personality Disorder (BPD) in 2009 and then I had a secondary (though recently it has become primary) diagnosis of Transient Psychosis.

You can learn more about BPD: https://www.nhs.uk/mental-health/conditions/borderline-personality-disorder/diagnosis/

Why do you have hallucinations?

So, initially my auditory and visual hallucinations were defined as being caused my the traumas I have experienced. The thought some professionals had was that since I disassociated during the abuse, maybe I’d kind of separated parts of myself off and they had formed the individual voices I used to hear. Then, the visual hallucinations which were primarily of rabbits, were thought to have been caused by the fact that when I was little I had two rabbits who killed their babies.

Honestly? It makes a lot of sense why those professionals thought those things to be true, but it was also really frustrating because I had the distinct feeling that there was more to it. That something was ‘wrong.’ Something so much more than it being about what had happened to me. And finally, some professionals began to agree with me and I was put on an antipsychotic medication. When it was increased last year, I spent over one year of absolutely no hallucinations. And I’m so grateful for all of that time in the most predictable way, I’m also grateful because it’s illustrated that myself and the professionals who agreed, were right. And once the Transient Psychosis diagnosis came, I found that my experiences were taking much more seriously.

I feel like feeling suicidal isn’t as straightforward (not sure if that’s the best word?) as it being that you want to be dead, and that’s the only thought running through your mind, or the only emotion you’re experiencing. It’s about having so many things in your head, but all of them seeming to lead to the same – and only – solution.

How do you self-harm?

This question always makes me think about when I was in a psychiatric hospital and one of the inpatients snuck a sharp onto the ward and everyone (excluding me) passed it around one another. I couldn’t believe that no one knew what the next person was going to use it for. You know? Like, they had to have known that they were giving someone what they needed to self-harm. They had to know they were encouraging and promoting it as a coping mechanism.

And so, I would never answer this question.

What has helped you the most?

Another reminder of my time in a psychiatric hospital: another inpatient once asked what it had taken for me to turn things around and I made the mistake of telling her the just how bad things had to get before everything finally hit home and I realised that I didn’t want that to be my life. Next thing I knew, this girl was doing all the – very dangerous and risky – things I had told her that I’d done. And I remember crying from the guilt that I’d influenced her in that way. I was reassured by everyone around me though, that the girl was a grown adult who needed to take responsibility for her behaviours and if she’s taken my experiences as advice, then that’s on her.

So, with that in mind, I’ll just say that the healthiest things to have helped me in my recovery, have been the support of my Mum and best-friends, the existence of my God Children, therapy, and medication.

Do you never think about your family and friends when you hurt yourself?

Sometimes, I don’t know how to take this question – I mean, is it meant as a bit of a guilt-trip? Like, am I supposed to be thinking ‘eeee God, no! I never think of the people my actions might hurt!’ And is it reasonable that I actually take that question as an insult? Because, to me, it says that the person asking, must think I’m such a selfish and spiteful person that they think this is something I would do (not think of my friends and family).

You get this guilt-trip method a lot where suicide attempts are concerned. If you’re in a position where there are professionals trying to stop you from doing it – or trying to encourage you to get help for what you’ve already done – the main tactic is to urge you to consider the impact your death might have on the people you are assumed to care about the most. I say ‘assumed’ because there’s so many occasions when someone has referred to my Dad in this guilt-trip and I’m like “I haven’t spoken to him for ten years, and the last time I saw him he was throwing a suitcase at me and telling me to move out. So I really don’t think he’ll care if I die!”

Aside from the assumption that you even have certain people in your life, the other assumption made in this question is that those people have absolutely nothing to do with how you’re feeling and your actions… It makes me think that maybe it’s about putting the blame on you – as if no one could have possibly done something so wrong that it would leave a person feeling suicidal?!

Do you ever regret telling people?

I’m very much a ‘glass-half-full’ type of person and I really don’t see the point in having regrets because why spend your time thinking about something that can’t be changed? Why mull over something that you can’t change?

So, no; I don’t regret reporting the abuse. If I was the type of person to have regrets, I’d regret not telling someone sooner because whilst giving my statement and being interviewed by the Police was probably one of the hardest things I’ve ever had to do, it was do-able. More do-able than I had worried it would be – than I had imagined it would be. And if I’d known it wouldn’t be as ‘bad’ as my catastrophic thinking had assumed, I would have reported it at the time it happened and there would’ve been so much more evidence that could have made the different in him being charged and sentenced.

Why did you start blogging?

I first created I’m NOT Disordered in 2013 after having been a psychiatric inpatient for almost one year. I had kept my mental illness a secret from my friends over the three years I was poorly before being admitted to hospital; and then the hospital I was sent to was over 100 miles away from home, so I had the very understandable and obvious feeling that my friends and family couldn’t possibly know what was happening to me. So initially, my reason to start blogging were purely about educating my loved ones about mental health in the hope that it wouldn’t only aid them in supporting me, but also in supporting anyone else around them who might be struggling.

Then, when things seemed to start snowballing and I found my blog was massively gaining in readers, things kind of changed and my reasons to continue blogging through this influx in my audience, developed. I found myself more aware of the impact I’m NOT Disordered could have on others. That it was no longer just about me and my journey for my social circle; now it was about helping complete strangers. I recognised that one reason I continued to blog was with the hope that in me being so open and honest about my mental health, perhaps it would instil bravery in others to speak up and that could result in someone being given help and support that could really be life-saving.

In recent years, my reason for blogging has shifted again because after almost nine years, I now view I’m NOT Disordered to be more of a commitment and through my opportunities that the popularity of my blog has enabled me to have, I’ve learnt a lot about what I’d like to do with my future.

How do you know how many readers you have?

Which are your favourite mental health blogs?

So, I’m fully aware how weird this sounds, but I don’t actually read mental health blogs… well none except my best-friend – Marty’s: www.gumonmyshoe.com! I really love the content that he and one of his other best-friends produce, whilst the content is primarily around a diagnosis of Bipolar, there are so many other posts that are more about mental health and friendships in general. And I’ve actually found a lot of inspiration for my own content from theirs.

In terms of the blogs I usually follow though, my favourites are www.inthefrow.com by Victoria Magrath, and Zoe Sugg (who was previously just ‘Zoella’) whose content is now mostly on her YouTube Channel and her Instagram account. And whilst their content varies (with Victoria’s mostly being around beauty and fashion) I find a lot of inspiration in their more general ‘lifestyle’ posts.

How do you come up with the ideas for your posts?

You’d think that a good thing about blogging about mental health is that it’s a subject which is forever changing and evolving and so there’ll always be something to blog about... However, over the years, I’ve learnt that there can be quite a prolific, lengthy lull in things to blog about. There can be an absence in events, a period where your own mental health is so stable, and just a general lack of inspiration out there. But then, after the lull, there’s times when it seems like everything comes at once and you’re suddenly overwhelmed with ideas, inspiration, and thoughts around creating new content!

This inconsistency has probably had the greatest impact on my ideas for my blog posts, but as with a lot of challenges I’ve faced in my blogging career; I found that my passion for it provided me with a lot of determination to work my way through things. And it’s probably made me so much more creative with my content because being short of inspiration for anything stereotypical or predictable, has meant I’ve almost been forced to come up with more unique and original ideas for my posts.

To give a more simple answer; Pinterest, other blogs, life experiences, thoughts of what I would want to read about, events, charity campaign, comments of others…

What advice would you give to someone who is just starting to blog?

I think the first thing I would say is to do as much research and learning as you can before you start blogging. Don’t just look through rose-tinted glasses at all the bloggers with their freebies and press trips abroad; be as aware of the hardships and challenges of blogging as possible. I mean, I didn’t do that at all and it meant a lot of very steep learning curves that I had to navigate through alone because I didn’t know of anyone with a blog who I could get advice, help, and support from.