WHEN THEY SAY SUICIDE IS ‘SILLY’ 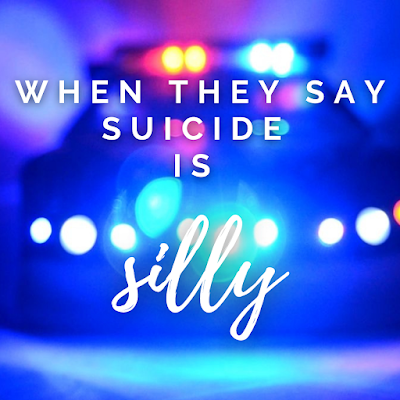 You, with your voice like nails on a chalkboard

Calling me out when I’m wounded

You, pickin’ on the weaker man…

And all you’re ever gonna be is mean

So, a few days ago I was in a mental health crisis and there was a Policeman who…well, let’s just say I’ve put a lengthy complaint in and have been told mine isn’t the first against him. Anyway, he made a number of discriminatory comments around mental health and a few very personal ones specifically about me, but the one which stuck out and which seemed to fuel everything else was when he referred to suicide as ‘something silly…’

THE IMPORTANCE OF RESPONSIBILITY

My immediate response to the comment was to tell him that he ‘really shouldn’t use a word like that to refer to something so serious.’ Of course there was no apology. No hands up to say “yes, ok. I was wrong, I’m sorry.”

Now, I don’t know about anyone else, but I hold apologies quite highly in considerations around respecting and appreciating someone or an organisation on a whole. I think this stems from all the years of Crisis teams telling me to take responsibility for my own safety and then trauma therapy and Dialectical Behaviour Therapy (DBT) encouraging you to view your behaviours as a chosen response.

Initially that was a hard thought process because who ‘chooses’ to self-harm? But I learnt and realised that it was more about the fundamentals of the situation. You know? Like, if someone touched your skin with fire, you’d burn. If someone touched your skin with fire and you punched them in the face(!)… Well, you could argue that a level of that was instinctual, but it wasn’t something which everyone would do. And recognising that I’m responding to something because of something inside of me and not looking to blame another person who arguably, might have at the very least stoked the fire, was just one key to my recovery.

Working so hard and for such a long time (I had DBT for two and a half years) on responsibility and recognising my part in situations, has meant I’m very passionate about others also having the decency to do this. I’m very much a ‘treat-others-how-you’d-like-to-be-treat’ kind of person and having put so much effort into learning about responsibility and accepting consequences, I feel that I can recognise just how challenging it is; and so I appreciate the effort others must go to, to do this too.

Aside from him not taking responsibility, the other thought going through my head was even if he did – even if he gave a meaningful and profuse apology – would that matter? Would it actually help? Because the comment had already been said and that had already damaged any sort of respect or gratitude I could have had with him. But I came to the conclusion that an apology wouldn’t change the facts, but it would have helped the future – because by that point, it was decided that him and the female Officer (who was lovely) would be taking me to hospital and sitting with me there.

Something else I learnt in DBT and through trauma therapy was about forgiveness and the power of ‘moving on.’ The idea that something horrible can happen and you can – at some point – decide that it’s over now – that you’re putting it to bed – is definitely appealing… But, to me, it’s a bit like looking though rose-tinted glasses, because things aren’t that ‘simple’ or ‘easy.’ Yes, there have been instances in my life where I’ve had to accept they’ve happened and that I can’t do anything else about it, but do I just ‘move on?’ I mean, these therapists and professionals also encourage you to confront what has happened to you…

With this situation with the Policeman, I think it’d be fair to say I was like a dog with a bone – I clung onto that one comment and I wouldn’t let him forget it. Occasionally, I’d agree that it might have been argumentative for me to continue to bring it up  throughout our hour or so together, but when I thought about how disgraceful his comment was, and the potential damage it could have had – I mean yes, I bawled about it, but I could have responded in a very unsafe (for me or him) way – I just felt like he deserved for everyone to know the type of person he was.

WHEN IT HAPPENS TO YOU, IT’S DIFFERENT

So, when we arrived at the hospital and he began talking to a Paramedic about the Paramedic he was dating, I kind of saw red and shouted that the girl should know he’s the kind of person to deem suicide as ‘silly.’ His response? “Alright, you’ve said your bit; shut up now!” To be honest, I kind of surprised myself with how angry I was; especially because suicide being classed as ‘doing something silly’ isn’t an unheard of reference… In fact, not every long before this incident, I had retweeted something about people using that phrase! So, of course I know it happens… I just don’t think it’s ever happened for me.

It’s like… when you go to a Doctor and they say “I’ve heard it all before” and you’re sat there thinking ‘I’ve never said it all before!’ Even when you know something happens to others, you can still – to a certain degree – be oblivious to it and the gravity of the impact it can have, until it happens to you. And I guess that’s what happened with this comment.

Aside from the shock of personally experiencing this, I think that another factor in the level of my anger, was that I’ve put so much effort into helping my local NHS mental health trust provide mental health training for our local police force. It was actually a reason why I said to this Policeman “you’re the exact person I’ve trained Officers not to be like.” Like, in one training session, a Sergeant was sitting in on it and he made a comment about ‘babysitting’ a person in a mental health crisis and I spoke up and told the new recruits we were training, not to be afraid to confront a more senior officer if they’re discriminatory around mental health.

A QUABLE OVER POWER & CONTROL

That I’d put so much of my time and energy into contributing to something that had the potential to change something, and to then see that actually; it might not have had as huge an impact as intended or hoped… it’s disappointing. And frustrating. And it’s left me wondering what the point was… Even though I’ve had so many of those new recruits I helped train reach out and tell me that what I’d said was helpful for them, this one Officer’s comment, has seemed to overshadow and overwhelm those encouraging messages.

And that just adds to the disappointment and frustration because it raises an annoyance with myself. I sometimes think ‘how can I let him have that much power?’ ‘How can I let him dismiss all that positivity?’ It all became very reminiscent of the thoughts around the abuse and my considerations that the longer I self-harm or attempt suicide, the more influence and power my abuser has had over my life. And perhaps this resemblance has been a trigger or at the very least, a push; to the anger I felt grow in my throat the longer I was with that Policeman.

Being in a mental health crisis – especially where it involves hallucinations and Police – can leave a person feeling so out of control and vulnerable that it’s almost natural and understandable to desperately fumble around in the dark, searching for something – anything – that can grant you even just a little bit more control over the situation. And having someone deem my desperate way to gain control as ‘silly’ was insulting and offensive. Like, what right did he have to judge me in that way?

THE IMPACT OF OTHERS

One of the scariest and most frustrating elements to this incident was the presence of people who were around the Officer and I. Again, it kind of reminded me of the abuse because the Police told me that when they interviewed a lot of my abusers colleagues, their responses seemed to be something along the lines of ‘I did wonder if that was happening…’ Hearing that, I was filled with passionate hatred that urged me to scream; “why the hell didn’t you stop it then?!”

Fortunately the female Officer who accompanied him, was a little braver and when the Policeman and I were in a full on screaming match in the Ambulance corridor, she spoke up and encouraged him to “go outside and take a breath.” And yes, he followed her advice, but she was soon recommending he do it again when he marched back in telling me that he’d told his ‘boss’ about the suicide/silly comment, so it wouldn’t matter if I tried to. I felt myself biting on my gum to stop myself from smiling because it was just such a predictable little manipulation – his stupid attempt to convince that there was no point in putting in the complaint I’d told him I would be completing as soon as I was well enough (and yes, I have filled the form in and filed my complaint officially).

In between our raised voices, there was a point where I was refusing to have my blood pressure and pulse monitored and a Healthcare Assistant said that I was usually ‘all right’ with her so I told her it wasn’t her – it was the Officer. And then I told her and the Nurse what he’d said and even with masks on, I could see the shock and surprise in their eyes! And he just held his hands up in mock surrender and said “my actual words were ‘don’t do something silly!’” And I almost laughed because how could he possibly think that response made him look any better?!

Of all the times I tried not to smile, that stopped being even remotely possible when the Officer told me they were leaving! I could not have been happier – even though they added that it was so that two others could take over!

Obviously I told the two Officers who arrived what had been said it was totally validated and comforted when one of them responded with “that doesn’t surprise me” and “your complaint won’t be the first he’s had!” It reassured me that this Officer’s horrible comments hadn’t actually been totally personal, nor that I had been deserving of them all. It also confirmed my thought/doubts when he’d said “I promise you, we all call it silly!” – something that’s a bit typical when a person is in the wrong – making out like they aren’t alone in their behaviours and attitude.

The key; speak up to enhance the chance of someone who deems suicide to be ‘silly’ being alone in that thought.