THE REALITY OF INEQUALITY IN BLOGGING | WORLD MENTAL HEALTH DAY 2021 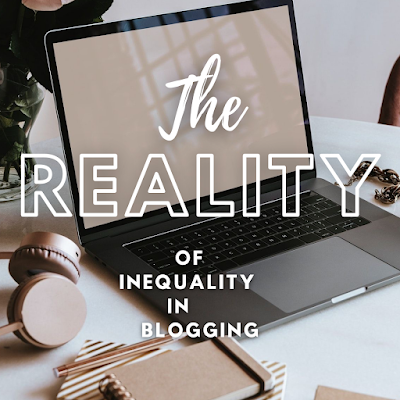 You swore and said we are not

We are not shining stars

This I know, I never said we are

With this year’s theme for World Mental Health Day being ‘mental health in an unequal world’ I’ve toyed with a number of ideas for creating a blog post with it in mind. No matter which angle I attempted to write from though, I found myself always talking about the inequality I’ve experienced in the blogging world. Whilst I realise this might seem completely different, superficial, and irrelevant to mental health, my blog has had an enormous impact on my mental health…

When I first created I’m NOT Disordered in 2013, I’d only heard of three mental health blogs: one was by a psychiatric nurse, another by an ex-service user, and one from a Police Officer with a keen interest in mental health law.

This lack of mental health themed content, firstly meant a distinct absence of inequality because there was no real competition. I don’t really like to use the word ‘competition’ because I don’t agree with the feature of it in the blogging world, but the post is titled ‘the reality’ and competitiveness is definitely real in the industry!

To me, bloggers should be supportive of one another rather than competitive and determined to ‘one up’ someone else. And I believe they definitely shouldn’t be blogging purely to compete with another blogger. To me, that says they’re in this for all the wrong reasons – similarly to when someone creates a blog with the expectation and only drive being that they might receive freebies! Having bloggers like that out there, actually ends up setting a poor example for the rest of us who are in it for the more meaningful gains e.g. psychological or emotional benefits, or sheer enjoyment.

Having that competitive aspect of blogging actually totally absent in the early days of I’m NOT Disordered, meant that I was able to make my blog a more true representation of myself; because had there been other blogs I looked at as competition, it might have meant I created my content based on that of others – or at the very least, with the content others produced in mind. And having that time to really make it mine, has enabled me to feel more comfortable being credited for its achievements because I can see that it all came from me.

The lack of inequality in those early days, also meant that when the industry began to grow and mental health blogs began to flood the internet, the sudden rise of competitiveness and it’s influence on equality, came as a complete shock. To me, it wasn’t as though it had seemed to slowly build; it was like one day I logged onto Twitter and there were so many people with ‘mental health blogger’ in their profile bio! And like most people (not just those with the same psychiatric diagnosis as me), I don’t cope well with change because I feel like the rug has been pulled out from beneath me; or like I was swimming with a floater and someone just took it away… I don’t know how to suddenly cope and adapt to – what feels like – a totally different situation.

By the time this saturation of mental health related content hit the digital world, I’m NOT Disordered was a few years old so I had built something fairly solid… I mean, if I was only just about to start blogging, I probably would’ve been completely thrown off the idea if I’d seen all the competition out there. Like a lot of situations in life, it can sadly be incredibly easy to feel intimidated and unequal to everyone else doing what you want to – or are doing. However, I think I managed to turn this hugely challenging change into two healthy results:

The first way was that it sort of forced me to develop more confidence and courage around my blogging. I mean, I immediately knew that it was a kind of sink or swim moment (ironic after the metaphor I used earlier!) – in that the chance could either encourage me to do better, or it could lead me to completely give up on blogging. But I’d worked too hard, and for too long, to just quit for that one reason! And discovering these new qualities – I think – really helped me to make I’m NOT Disordered into what it is today.

One scenario where my new-found confidence has been useful was when someone asked me why I care and put so much attention on my blog’s statistics. Now, before this confidence, I probably would’ve flushed bright red, and muttered some sort of argument for the fact that I wasn’t being big-headed or labelling my numbers as the most important part of my blog. But now, the determination and passion around my courage, enabled me to present a pretty damn impressive (if I do say so myself!) argument about how being aware of my statistics encourages me that there’s a very good chance I’ve helped at least one person out of everyone who’s read I’m NOT Disordered! And that hope and urge to help someone, drives me to continue being so open and honest when blogging about my mental health and my personal experiences.

That feeling that the competitiveness brought me confidence which led to me putting attention on the statistics, ironically; could have fuelled further competition. I mean, it wouldn’t have been a huge leap to start looking at the numbers on other blogs (I’m not the only one to have their statistic on their actual blog for all to see!). Putting myself in that scenario where I kind of had to choose not to let the numbers have any impact that resembled competition, I formed the second healthy result to the newly formed competitive nature: I looked at it as positive.

Now, this is probably one of those moments where people might read and think ‘like it’s that easy?!’ So no, it wasn’t easy to turn my thoughts and feelings on competitiveness completely on their head. And it certainly wasn’t a simple, two-minute process! It involved a lot of thought, a lot of effort, and a lot of time; but by that point, I was so passionate about blogging that putting so much work into keeping I’m NOT Disordered and not being negatively phased by the competition, felt completely worthwhile.

So I looked at making a comparison on statistics – and making comparisons around blogging in general – as a drive to improve my own blog and my own numbers. I kind of looked at others as an influence and an inspiration rather than an intimidation or a reason to doubt myself and my blog.

Probably one of the biggest contributors to my ability and thought to look at mental health in a lot of different ways, has been that I actually mostly follow and enjoy looking at fashion and beauty blogs. Although it hasn’t always been a good thing… When I first started blogging and would follow fashion blogs, I got the sadly distinct impression that the blogging world was unequal when it came to opportunities depending on the theme of your blog. I mean, I would look at bloggers posting collaborations with couture fashion labels and well-known beauty brands and be lost as to how I could ever achieve an opportunity like that.

Looking back, I can see that I was so naïve to think that fashion and beauty were; firstly, the only collaboration partners in the blogging world! And secondly, that having such collaborations were the hallmark of a successful blog/blogger – as though they were a definition for it. After trying and failing to create collaborations in that industry (which included signing up to review some beauty products) I finally realised that if I was going to consider collaborating with a person or an organisation, I needed to be looking in the mental health realm. So I looked at my favourite fashion bloggers working with labels like Chanel and Dior, and brainstormed the mental health equivalents! You know? Like, I thought about the biggest organisation and most well-known people in the industry I blog for, and recognised that collaborating with one of those is just as big an achievement!

I think that this difference in opportunities really highlights the presence of an inequality in blogging but which is a fairly natural and understandable. I mean, there should be a variety in the nature of collaborations and the organisations involved where the blogs are centred around a completely different topic. It’s kind of like the whole politically correct effect in that it sometimes leaves people making totally unreasonable comments out of fear of saying the wrong thing. In blogging, I feel that whilst I grew and learnt from my experiences of approaching fashion brands, it was also a bit of a waste of time that I could’ve spent building relationships with more appropriate organisations.

Finally, if you’re in the blogging world and are struggling with inequality please don’t ever feel alone in that! As sad as it might be to hear of others feeling the same as you, just be reassured and comforted that you aren’t the only blogger to ever struggle with that.