How to Challenge Stigma

Monday, 28 September 2015
Mental health stigma is a well discussed subject in the media at the moment and a lot of people believe it to be like racism in that one day, it'll end and we'll all be shocked that it ever even happened. That people ever thought that way. Called people crazy and treat those people with less dignity and respect as any other human being.
Occasionally stories will come to light in the media that show stigma is disappearing and then others will illustrate those campaigning for reduced mental health stigma haven't got as far as they'd have hoped. 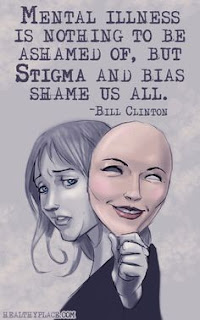 There are various methods and skills used to challenge the stigma of mental health. Those who hold such stigma, are often uneducated or experienced with regards to mental health. And people are often scared of something they know nothing about and can't understand or comprehend.
Honesty can be a massive aid in challenging stigma. Recently, many public figures have come forward and spoken to the media about their own battles with mental health, e.g. Zoella, Robin Williams and Nikki Grahame which has helped in educating the general public. There's also some significance surrounding celebrities coming forward as there is to a member of the public. I think it's about knowing these celebrities and seeing their work and then hearing they have struggles is surprising and humbling. They weren't expecting it. And it rids them of the beliefs that, 1. It is obvious when someone is mentally unwell and 2. that those with a mental illness are unable to function as well as others.
When are you ready to tell others about your mental health stuggles then it's important that you don't feel pressured into saying things that you'd rather were kept private for the moment. When I began blogging there were things out of bounds to blog about but as time goes by, I've felt more comfortable to speak about those things.
In talking about you poor mental health it's important to be as open as you feel comfortable and explain your experiences as simply as possible to increase the chance of others understanding. If someone you know is speaking out about their mental illness then it's important that they feel supported in doing this. We must all support one another in speaking up to help make it feel easier to do so.
In challenging stigma it is important to have some sort of self-belief and confidence in what you are doing. You must want to end mental health stigma and be passionate about doing so. It is also helpful to have confidence in the recovery of mental illness otherwise, what is the point in talking about it? People need to be told that that you can recover from mental illness otherwise they'll hold a fear that once someone is poorly, dangerous or unsafe then they remain that way forever. They'll feel hopeless for those with mental illness.
If you aren't comfortable publicizing your own story then you could support others by publicizing and promoting their efforts to challenge stigma.
Finally, when confronted with mental health stigma, it is best to remain mature, calm and articulate as you are representing all those who agree that the stigma should be challenged.
Labels: advice, future, help, information, media, patients, positives, praise, stigma, support
SHARE:
Newer Post Older Post
Home