Sunday, 13 September 2015
I first heard about Story Camp when one of lovely digital officer's; Crystal emailed me asking if I'd become a 'Consultant' for the event. This meant, that I was asked my opinions, views, and thoughts throughout preparations for the event which included any important aspects that I believed others should take from and learn from the event. And, because being a Consultant meant I was given an automatic place to attend the event, I was asked what I'd like to learn from the day.
Weeks before the event, I was given the honour of making the closing speech at the end and as anxious as I was, I recognised what an amazing opportunity this would be in publicising I'm NOT Disordered and agreed. If asked to speak about my life, I'd be stuck but, anything to do with my blog and I'm willing to ignore my lack of confidence and anxiety.
The event, as most are these days, was held in London and so, I travelled down by train on Wednesday afternoon and immediately felt at home (there's been serious thought going in to moving there for a while now) as I made my way to my hotel. It was a cute little, narrow but tall townhouse and my third floor room had a window that opened out onto King's Cross. Story Camp was held in the Free Word Centre and it was a lovely surprise to have a lady who I've seen on the News numerous times, make one of the first speeches; Sue Baker, Director of Time To Change.  She talked about 'accelerated social change' which meant we'd built a large profile on mental health discrimination but still have work to do. She talked about how it was only after the death of Robin Williams that she began opening up about her own lived experience of mental health by means of depression and suicidal ideation. She talked about how many people were surprised that someone in such a formal role could have had such experiences but that speaking out ought to be encouraged as it helps to change stereotypes and encourage others to speak out. She promoted the event in telling us how important it is to get to know one another in your peer group, as it enables you to take strength and passion from those with lived experience whom it is an honour to work alongside. 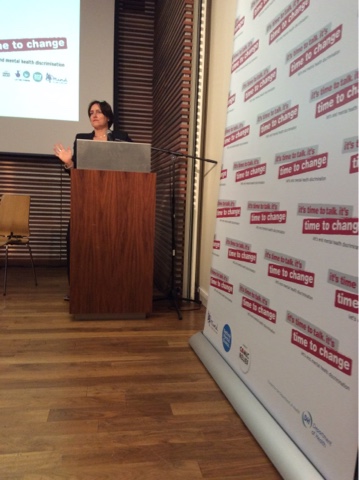 We also heard from Jude who was from a digital agency who started by raising the fact that if you searched 'mental health' in Google Images your first results would include at least four pictures of people clutching their heads with both hands in a dramatic fashion, commonly known as 'head .' We discussed different methods of telling your story, such as: blogging, vlogging, photo and audio and then the challenges of using photography to tell your story. These included aspects
such as misinterpretation and the inability to photograph what is in your head. 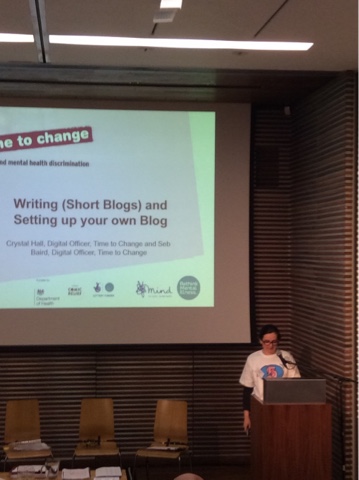 I was then put into a blogging workshop with the digital officer's; Crystal and Seb. Whether
arrogantly or not, I was sceptical that I'd learn anything since being a blogger for almost three years but I learnt lots, especially regarding the technical side of things. Crystal told us that Time To Change use short blogs because their research showed that people tend to use their site whilst on the go and so, short posts are easier to view.
When deciding to blog, TTC recommend reading other blogs and when writing a post, it is important to remember five points:
1. That there's an arc - beginning, middle, and end
2. Your audience
3. Your angle. For example what is your hook or theme?
4. Action e.g. Some sort of conflict - not the way it is in movies!!
5. An answer. Such as a conclusion, resolution or future
We also discussed how excessive detail, a boring title and big blocks of text can have a negative impact on your blog.
After this, I joined the vlogging workshop with Johnny Benjamin. Being a Twitter nerd, I'd heard about #FindMike but some haven't; Johnny had been about to jump from a bridge in London a few years ago and was stopped. He went on a mission all these years later to find his life-saver and his mission went viral, sweeping the internet, TV and radio. Johnny and a co-worker talked to us about filming vlogs and videos for YouTube, showing us examples of them from Johnny, a mental health YouTuber and Zoella's first Anxiety video. 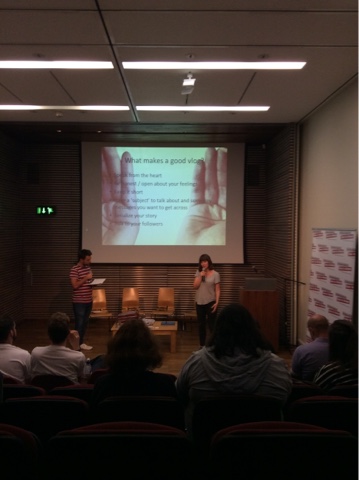 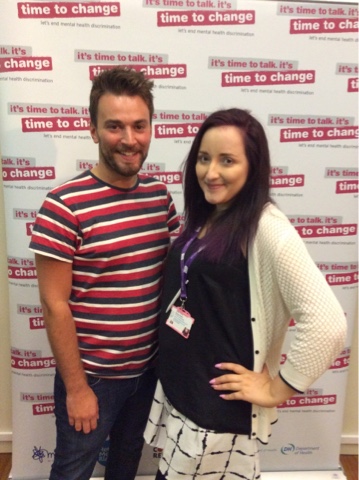 And wrapping the entire event up? Little old me! 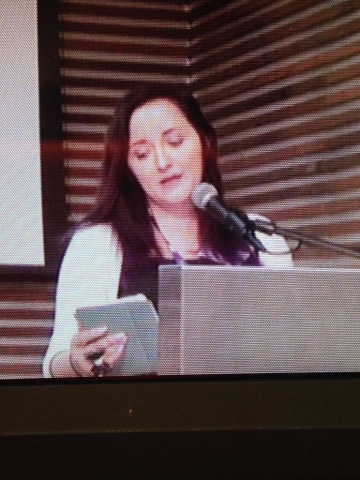