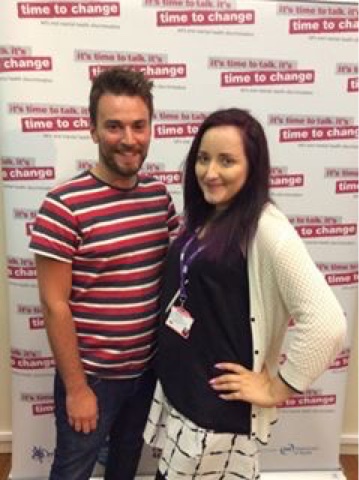 I was ten years old when I first heard a voice in my head. It told me it was an angel. At first, I quite liked it being there. It was more like a companion, telling me such things as "don't forget to do your English essay; it's due tomorrow."
Around the same time, I first saw the film 'The Truman Show.' My friend who I watched it with suggested that I might possibly be in my own version of the film. I laughed off the absurdity of the idea, but in my mind a seed had been planted. What if I was on my own TV reality show without my knowledge? It was possible. It happened to Truman Burbank; it could happen to me.
And so, for the next decade I believed I was being watched by cameras wherever I went. I also thought that my family and friends were actors, playing their parts in a world fabricated around me.
Like the voice I was hearing, I came to accept that this was the path chosen for me, and that there was little I could do to change that. I may as well embrace it. But when I turned 16, I started developing severely low moods. They would last for days and weeks on end, and I spent hours in my room crying at times. I was embarrassed, ashamed and didn't know how to articulate my feelings to anyone. I kept silent about it. It was at this point that the voice I was hearing changed too, becoming sinister and tormenting. I now believed I was being possessed by the devil. It issued me challenges like: "your parents are going to die in a car crash unless you walk up and down the stairs three times." I started to consider suicide. One day I tried to strangle myself in the school toilets. Life had become unbearable and I was unable to cope.
Despite all of this, I probably seemed like a typical teenager to those around me. In fact, I was a bit of a swot at school; achieving really high grades in my GCSEs. One friend did notice a difference in my behaviour though, and confronted me about it. I told him about the incident in the school toilets and he forced me to see my GP. Over the next few years I saw various GPs and tried courses of anti-depressants. I always played down the true state of my mind. I was terrified I would end up in an institution like Claymore Hospital in the film 'Girl, Interrupted' if I did. I was also convinced that this would all just pass. At 18 I left my home in North London to go to drama school in Manchester; I was sure that it was the change I needed to put everything right. It only took a few days though, before I fell back in to a cycle of depression. This time, it hit harder than ever before; but I was determined to carry on and achieve my degree. I treasured my time at drama school; every day it allowed me to escape my reality by becoming someone else. Outside of it though, I was really struggling: drinking heavily, self-harming and alienating myself more and more from people around me.
At the age of 20 I had a breakdown. It was a freezing cold night in late November 2007 when I left my house feeling totally out of control. I went onto a dual carriageway and walked down it, shouting and screaming at the cars driving past. It felt like my mind and body were being controlled by the devil. I was in psychosis and needed serious help. I collapsed on the carriageway and was taken to A&E. It would be another few weeks though before I was admitted to a psychiatric unit and given a diagnosis of Schizoaffective Disorder; a combination of Schizophrenia and Bipolar. I found it impossible to come to terms with; it seemed like I'd been handed a life sentence. There was also the issue of my sexuality, which I refused to talk about whenever it came up in therapy. I couldn't bring myself to admit I was gay; coming from a Jewish background, I was sure that my family would disown me.
A month into my stay, having given up hope of getting better, I ran away from hospital, intending to take my life. I was apprehended though by a passing stranger who stopped me with his word: "I've been where you are. I got through it, I know you can too." I will never forget the weight of these words and the impact they had in me. For the first time in so long, I could see through the darkness that had brought me to this moment. I decided not to go through with my actions and returned to hospital.
Recovery was slow and gradual, but from my brief meeting with the passing stranger, I had a sense that it was possible to overcome my illness. I was also able to accept my sexuality as well, thanks to a wonderful nurse who sat with me every day, telling me how happy she was that her son had come out. Her words of love and pride prompted me to do the same.
It's taken a number of years, but I can finally say I have learnt how to manage my condition. I'm now very open about my mental health; creating a YouTube channel that has been watched by hundreds of thousands of people and receiving praise from the likes of Stephen Fry. I've also written a book of poetry and presented a BBC3 documentary about living with mental illness. I want to pass on the message of hope to others. Overcoming any adversity in life is possible.
Labels: achievement, advice, bipolar, coping, disassociation, future, hallucinations, help, hope, media, mental health, poorly, positives, psychosis, support, therapy
SHARE:
Newer Post Older Post
Home