10 Things You Should Know About... Feeling Suicidal 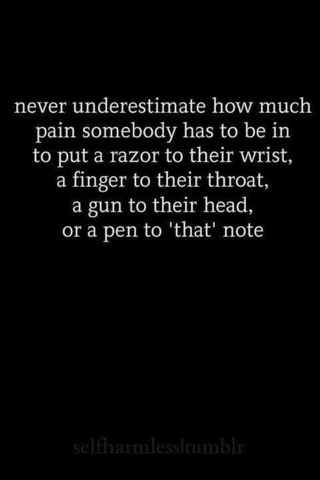 1.  There's so many causes for a person to feel suicidal. This seems quite obvious but yet somehow so many people fail to bear this in mind when confronted with a person who is feeling suicidal. And it isn't only carers, friends or the general public; it's professionals too. The people who are more likely to have experience in dealing with those who are exhibiting these feelings.

2. The cause of someone feeling suicidal should never be compared to the cause for another person. I mentioned this in a previous post in this series but... No one should judge the cause. Everyone reacts to things in different ways and something that makes one person feel suicidal, might not cause another person. But no one should ever feel demeaned. No one should respond by saying or thinking that if they'd experienced the same thing, it wouldn't have caused them to feel suicidal.
3. When a person feels suicidal, this does not mean there is no hope for them. It doesn't mean that they won't get better. It doesn't mean that they will die. For some, this might seem obvious but you'd be surprised at how many people; especially professionals, think in this way. There's always hope. And I know this because I'm still alive.
4. There's a difference between feeling suicidal and attempting suicide. It is possible for a person to feel suicidal, yet not actively try to kill themselves. Personally, I struggled to recognise this because I was often advised by professionals to ring them when I was feeling suicidal. Their point was that they were convinced that if I did, they'd be able to convince me otherwise. Instead I found that I wasn't taken seriously. Because those who called them after having self-harmed or actually attempted suicide were prioritised. If someone voices feeling suicidal then it shouldn't be disregarded because they haven't tried to kill themselves.
5. Initiating help does not mean that you didn't mean what you did, or that you've done it for attention. It's commonly thought that if you took an overdose (for example) and then presented at A&E, you mustn't have meant it. You didn't really want to kill yourself. You did it to get a reaction. For attention. Personally, there'd be so many reasons why I'd get help for an overdose; sometimes I'd done it because the voices had told me, sometimes I regretted it afterwards, and sometimes I was convinced they couldn't do anything about it but I just wanted them to know that I'd done it and was going to die. At the time I couldn't make sense of it and it was made even more confusing when professionals couldn't understand either.
6. It doesn't matter what means someone uses to attempt suicide, there's no difference. I'll never forget the time a police officer told me that the people who were found hanging in the woods were the ones who were actually suicidal. It's the same as what causes someone to feel this way, in that no one should be belittled. No attempt is too small to initiate help for that person. Actually, I have never met a person who has also tried to kill themselves, judge the method someone else uses. I think that says more about others.
7. It's so disheartening to have professionals tell you that they can't help you if you won't let them. That you won't get better until you want to. When you're feeling suicidal, it'll feel like the darkest time of your life. And so it's completely reasonable that you'd prevent others from helping you; it's ironic that the time in your life when you probably need the most help is also when you're the most reluctant to accept it. But this domestic mean that you'll never feel better. I'm a firm believer that you need to want to get better in order to. But there's literally no point in saying this when a person feels suicidal; it's more likely to make the person feel worse if anything. My point? Not wanting help and not believing things will ever get better at that particular moment in time, does not mean you will never want help and you will never get better.
8. It's probably fair to say that there's no right way to react to a person feeling suicidal. Purely because each individual would need, and in some cases want, a different response. Personally, I can honestly say that right there and then I have never thought 'oh! Thank God they said that' or 'thank God they did that.' Right now? I'm so thankful to every single reaction and response because without just one of them, who's to say that I'd be where I am today? So it might make you angry, disappointed, hopeless... But when you do feel better (because you will) you might look back on it with a completely different view.
9. No two people will stop feeling suicidal for the same reason. This can be very disheartening if you're in an inpatient scenario in particular. When I was feeling much better and they were discussing  my discharge from hospital, there was one girl on the ward who asked what had made me get better. I told her it's been a combination of different things and then made the mistake of telling her that being temporarily moved to the psychiatric intensive care unit had given me the kick up the ass that if needed. She then did everything in her power (mainly self-harming and physically attacking staff) to be moved to that unit. I partly felt responsible for it and the experience has taught me to stress to people that different people will get better in different ways.

AND number ten! It'd feel wrong not to use the final point in the final series post as a little message to you lovely people. I wanted this series to give you all a basic round-up of aspects that I've probably spoken about in lots of different posts. And I'd like to thank everyone for the positive feedback on this series! If you've enjoyed it then please keep an eye out for the next series!
Labels: advice, coping, future, help, hope, mental health, overdose, poorly, series, suicide
SHARE:
Newer Post Older Post
Home