10 Things You Should Know About... Self-Harm

Monday, 18 January 2016
Note: this post contains discussion of and references to self-harm 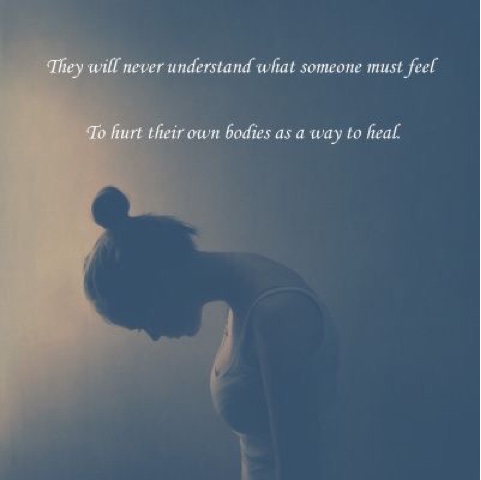 1. There's so many different ways to self-harm, and lots of people think that they know this because the media and mental health organisations seem to publicise and empathise this. The usual methods of self-harm that are publicised are cutting or burning the skin, inflicting injury often by hitting or punching  yourself, abusing substances e.g. alcohol or drugs, and developing an eating disorder through starvation, purging or self-induced vomiting.

2. Sometimes, behaviours and acts that are easily assumed to be a suicide attempt could actually be a method of self-harming. Personally, I used to overdose very regular (every 3-4 days at my most poorly) and, understandably, it was often thought to be a suicide attempt. But there are so many negative things that came from overdosing that could make the overdose more obviously self-harm. For example needing injections and medication that made you feel poorly.
3. The reason why a person self-harms is obviously essential in supporting them and helping them to change this behaviour. I think that many people, professionals included, immediately ask the person why they have done what they have; in the assumption that the person can tell them the reasons. It's so easy to convince yourself that of course someone who hurts themselves will know why they're doing so.
4. The reaction from anyone to a person who has self-harmed is crucial. If a person has felt the need to hurt themselves then the last thing that person needs is to be judged, unsupported and criticised. Personally, I felt so bad about myself; felt that I was useless, a horrible person, that I deserved everything that happened to me. And so, when professionals would judge me, accuse me of being something that I wasn't, show no concern for what I'd done and why I'd done it, I'd feel even worse. I'd be angry that the people who should help me were refusing to. That they didn't believe I could get better; I was hopeless. A lost cause. In a way, overdosing meant that I felt validated. That everything I believed of myself was true.
5. To label a person who has self-harmed as an 'attention seeker' says more about them than it does about the person who self-harmed. Attention seeker has such a bad connotation and when you actually think about it, it shouldn't automatically be thought of as negative. If a person is exhibiting behaviours- even if it isn't self-harm, purely in the hope of getting attention, then it should be considered why this person wants attention. I'm no longer ashamed to admit that I was once labelled an attention seeker; at the end of the day, I was diagnosed with a Personality Disorder and sectioned to a hospital for years. But even still, maybe I did want attention. Maybe I did want someone to sit up and think 'something bad must've happened to her for her to do this.'
6. There is no guaranteed way of preventing someone from self-harming. Firstly, if a person presents at A&E with bleeding arms and needing stitches, then neither sewing them up and letting them go or having them admitted to hospital, is a sure way to prevent it happening again. Sometimes, professionals appear to just 'accept' that a person is going to self-harm. Personally, I'd never needed stitches in the three years of my cutting before hospital; and so I guess it wasn't exactly dangerous. Risky perhaps - professionals always like to stress that you might cut too deep one time- but not really dangerous. I also witnessed a girl who had cut so deeply and so often that she needed plastic surgery yet the hospital staff acknowledge that no matter what they confiscated from her, she'd find a way.
7. Unlike so many aspects of mental health, knowing that you aren't alone in self-harming, isn't comforting or reassuring. Personally, I experienced this the most when I was in hospital, on the same ward for two and a half years. Inevitably, I grew to like some of the other girls (it was an all female ward) and so when I'd see them come out of the meds room with a nurse and a new, bright white bandage, it was upsetting. I began to use it to be able to empathise with those who cared about me whilst I self-harmed; especially my Mum.
8. There's so many different reasons to cause someone to stop self-harming and if you observe one stopping one person, then that doesn't mean it'll stop another. You could meet two people who cut but they could do it for completely different reasons. And those reasons will affect what it'll take to stop their self-harming. It doesn't matter what method of self-harm they use, how long it goes on for, or the physical affect it has. And no matter what it is that stops a person from self-harming, it should never be compared to what it takes for a different person.
9. It doesn't take long to discover that those who don't, and have never self-harmed, will never understand. And that's not meant as a judgement on them. It is a human's instinct to protect themselves. Whether it's the fight or flight, the aim is the same. And so, to meet someone who has completely gone against this instinct is something completely mystifying to others.
10. The knee-jerk response to a person who has self-harmed (no matter which method that has been used) is to ensure their physical health and safety. Probably in most instances, it's the most appropriate. Personally, sometimes talking things through might be the better initial reaction. There's been many times that I would've benefited more from being spoken to than I did being restrained and taken to a hospital against my will.