10 Things You Should Know About... Trauma/Abuse

TW: this post contains discussion and some detail of abuse etc.
Note: Just in case it isn't clear from this post; I do recognise that 'trauma' and 'abuse' can be completely different things 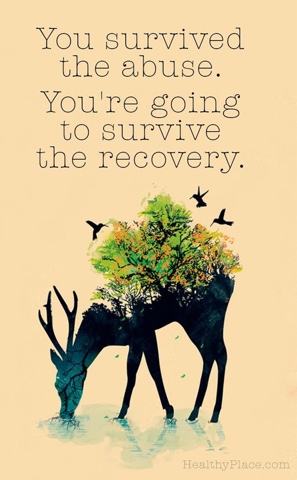 1. Categorising abuse and trauma into such vague categories as 'sexual' and 'emotional,' seems to give the impression that each individual experience that can be put in the same category, are now the same. The amount of times I have had people tell me that 'there's other people who've been through what you have, and they're not suicidal' was ridiculous. There are no two people in the entire world who have experienced the same trauma. None. Yes, perhaps person A was assaulted on a night out and person B was mugged so they've both gone through physical abuse but that's where the similarities end. And personally, I think that these publicised categories such as sexual, physical and emotional abuse, should only be used for legal purposes.
2. Once a person's gone through a trauma, their life is divided into three parts. Before. During. And after. The 'during' will be horrific. The 'after' will be monumental. And the 'before' is likely to be forgotten.
3. Whether the person has experienced a trauma or abuse, whether it was sexual or emotional, it was negative. The experience will never become positive. Only the 'after' has the potential to change that.
4. When the trauma or abuse is actually occurring (no matter the length or the amount of times it occurs) the person is giving everything they have to stay alive. Whether the experience alone threatens their life or not. Events like these, in our lives, are all about getting to the other side of it.
5. For those who go through a trauma or abuse, it is only the literal definition of it ending that really begins the 'after.' When it's no longer actually occurring, some might view this as just the beginning. No matter what the experience or how long it lasts, the 'after' is all about how you cope with what happened. Personally, my abuse literally finished in 2007, but I'd honestly say that it didn't end until 2015; when I entered recovery from my mental illness. In a way, I'd say that those eight years were tougher than the abuse; because I feel that I was so focused on surviving it, it was only once it had technically finished that it affected me. When it was occurring, I experienced it as each singular episode; yet in the years after, I'd say that I relived it more times than it had occurred.
6. The differences in which people cope with their trauma/abuse, often mean that you can't tell what they've been through just by looking at them. If I had a long-sleeved top on when you'd first met me, you wouldn't know that I was abused for six months. And even if it is somehow obvious what a person has experienced just by their appearance, then this does not mean they've coped more poorly than those where it isn't obvious. They haven't had a worse experience. The ways in which a person copes are the only reason that their suffering might be physically obvious. And reminding yourself of this should promote a way of thinking that you should never judge someone because you have no idea of the battles they have fought, and the battles they are fighting.
7. No matter what means a person uses to cope with their trauma or abuse, they will always believe that they could've done it better. They'll always criticise their own coping strategies because they will always deem another person's to be better. I often wished that I had never self-harmed because I feel that my scars prevent me from having the right to choose who knows what I have been through. The fact that a person will think this of themselves, is a massive reason why they don't need others to voice such opinions.
8. The time 'before' the trauma or abuse technically occurred, can have little to no effect of both what the person experiences and how they live in the 'after.' Personally, I'm always aware of the fact that I'd deem my childhood to be pretty close to perfect with barely any upsetting experiences and lots of love. For some reason, professionals are surprised to hear this. They assume that bad things are most likely to happen to a person who has had a difficult upbringing and home life. They assume that I should have coped better.
9. The way others react, has a larger impact than they might realise. This reaction might be to witnessing the trauma/abuse, being told about it, or finding out the person's coping strategies. Personally, no one witnessed the actual abuse; but some did interact with me whilst it was happening but without any knowledge of it. Once the majority of these people have found out what was happening to me during that time, they've all felt like it has helped them to make sense of my behaviour during that time. Unfortunately this has meant many have blamed themselves by believing that if they'd realised what had been happening then they could've stopped it. My thoughts? That it was my fault, and mine alone, that they didn't know what was happening.  The reactions to hearing what had happened to me were crucial. For three years I kept it all a secret at the fear of being labelled a liar; and so, when everyone supported me... Sometimes when people such as A&E staff discovered I'd been abused whilst they treat me for an overdose or stitched my cuts, it seemed that the knowledge almost made my behaviour acceptable.
10. Regardless of the fact that I spent an entire paragraph trying to make it clear that no two experiences are the same, you aren't alone. Your experience is completely unique to you, but I promise that no matter what your emotions are, you aren't alone.
Newer Post Older Post Home