Friday, 14 October 2016
This special post is in celebration of my cat's second Birthday! 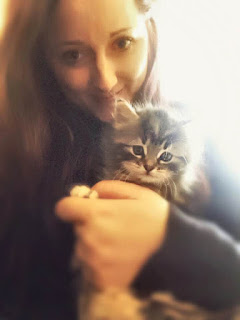 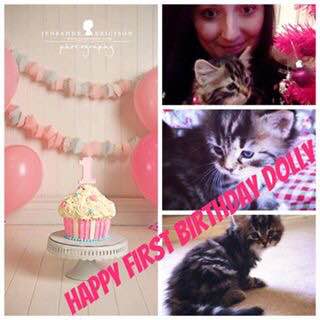 ONE. that when I first met Dolly at six weeks old, the lady selling her showed me how she liked to have her tummy tickled; and she still does! 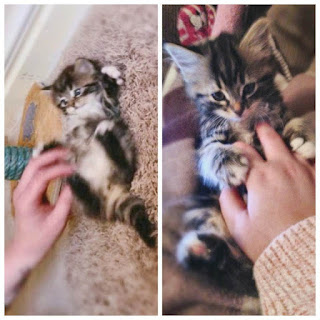 TWO. when she insists on having a little wee in her litter tray when I've just cleaned it out!
THREE. knowing that her favourite flavour of any kind of food (wet, dry, treats) was fish; and that she's gone off that and now prefers chicken, cheese or beef flavoured food 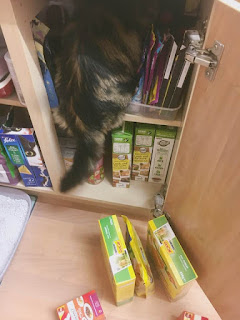 FOUR. that even though she's a tabby, I know her markings exactly 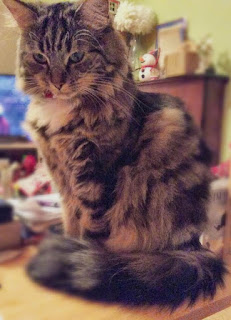 FIVE. that she's taught me what unconditional love is
SIX. that I can predict what she's about to do
SEVEN. that having to buy numerous duvets, mattresses and bedding to replace the ones she's just wee'd on doesn't really bother me because she's worth it! 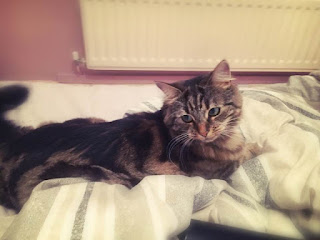 EIGHT. that when she sits looking up at my wardrobe door I know she wants me to open it so she can go sleep on my pyjamas
NINE. when she doesn't realise that I've closed the window and leaps through the blind and then there's a thud
TEN. when she first came home and she'd cry when I'd go into another room so I'd have to pop my head into the corridor and be like, "I'm here!"
ELEVEN. when the nurse at the Vets told me she (Dolly) had been put in a cage covered by a blanket because she'd been so aggressive but I put my hand in, took her out, cuddled her in and she started purring. The nurses were like, "that is not the same kitten that we've just had!"
TWELVE. when she began to climb, initially it was onto my bed or the settee (previously I'd have to lift her up onto it), then the kitchen counters, then the rail of the shower curtain, then the top of my walk-in wardrobe door, and now; the tree outside our home
THIRTEEN. that I have to pay no attention to her when she brings me 'gifts' from outside because then she gets very proud and either: doesn't kill it, or tries to bring it closer to me (including putting it in my bed!)
FOURTEEN. when she gets that curious look on her face
FIFTEEN. that she (like me) gets completely thrown off if there's even just the slightest change to our morning routine
SIXTEEN. when we have full-on five minute conversations 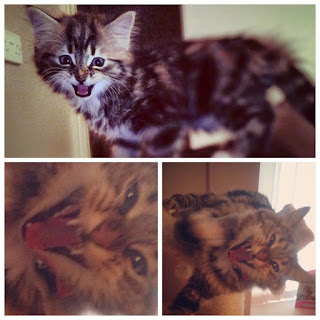 SEVENTEEN. that she prefers the empty Primark bag to her brand new, fancy, bed
EIGHTEEN. when she would silently sit on the rail of the shower curtain watching me wash and I'd mess myself when I saw her out the corner of my eye
NINETEEN. that whenever something gets too much for her, she looks to me
TWENTY. that even when I don't move or make a sound, she knows when I'm awake
TWENTY ONE. when others constantly dismissed her behaviour as 'normal for a cat' but I trusted my instincts and took her to the Vets; where she was diagnosed with Anxiety
TWENTY TWO. that everytime a negative comment was made regarding Dolly's behaviour/anxiety/mental health/medication/behaviour therapist I took them on with the same courage and conviction that I use when it's regarding my own behaviour/BPD/mental health/medication/therapy. Something that took over 9 years to learn and develop 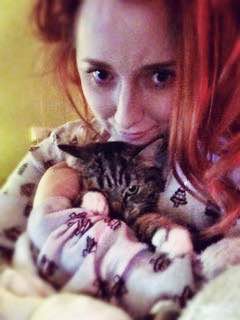 TWENTY THREE. when she's being given food and/or treats she rubs her face against your hand and/or the packet to say thank you, and then sits and waits for you to finish putting it in her bowl 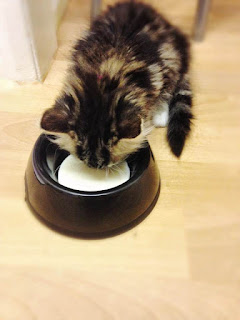 TWENTY FOUR. the realisation that she doesn't know how famous and important she is - having been featured not only all over my social media and blog; (with its 160k+ readers) but also in starring in a piece for Take A Break magazine 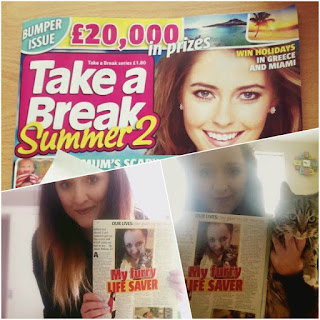