FROM CELLS TO CONFERENCES | MY MENTAL HEALTH RECOVERY WITH NORTHUMBRIA POLICE

Friday, 8 September 2017
'It is vital for the police to engage with representatives from all our communities. Working with Aimee has given me a clear insight into the needs and wishes of service users and how the police can best provide them with a quality of service which is both necessary and appropriate. This knowledge will then be shared with all front line officers to ensure that there is an improved understanding of how to help those who are in crisis cope with their individual circumstances and issues.
Aimee’s collaboration has been instrumental in helping to drive forward this important area of work.'
Inspector Steve Baker, Mental Health Lead, Northumbria Police 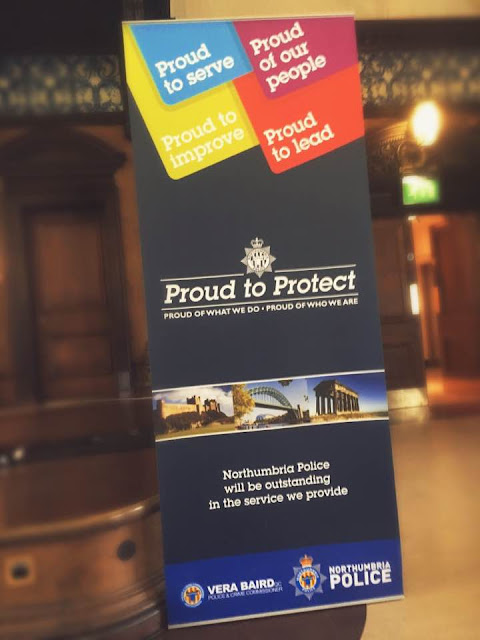 Two of them found me in a nearby town, after having ran away from A&E to avoid life saving treatment for an overdose - my very first suicide attempt.
I heard a nurse saying 'we haven't got the staff to sit with her!' and one officer (the other was in the examination room with me) said 'don't worry, there's two Acts we can detain her under.' Then he left his colleague to stay with me, telling him 'just found out she's 18 so if she runs, it's a 136.'
Ironically, it was my policeman's first experience with section 136 too (he actually had to ask his colleague how to fill out the paperwork), I didn't know if I felt comforted knowing that I wasn't alone in this scary situation, or distressed at the thought that even a professional didn't know what was going on.
(This incidence ended with me being sectioned under section 2 of the MHA 1983)


Things have changed since then.
( I realise that's a strong statement to make and I acknowledge that some Service Users may disagree or have experienced otherwise, so I want to stress that this is based on the specific work I'm about to talk about and specifically, with Northumbria Police.)

And I've worked to help them to do so.

Now, (in Northumbria Police) officers go through mental health training before properly beginning their roles in the police force. They are brought up to speed with any mental health related legislation that they might encounter and so, there'll be less confusion and more confidence in getting advice from other professionals. Officers are trained how to react to a person who may be the reason for their emergency response. They're told  I tell them; that we hear them talk amongst themselves and to their colleagues on radios; even when they think we can't. I've told them that the things they say have the potential to make someone feel worse - in the training I always say "you could turn up to a call of someone standing over the barrier on a bridge. Your words can either; give them further reason to jump, or help them to climb back to safety."
When the new recruits are asked what they'd do in different scenarios and how they'd approach someone, their answer has never been 'restrain and handcuff them straightaway.' 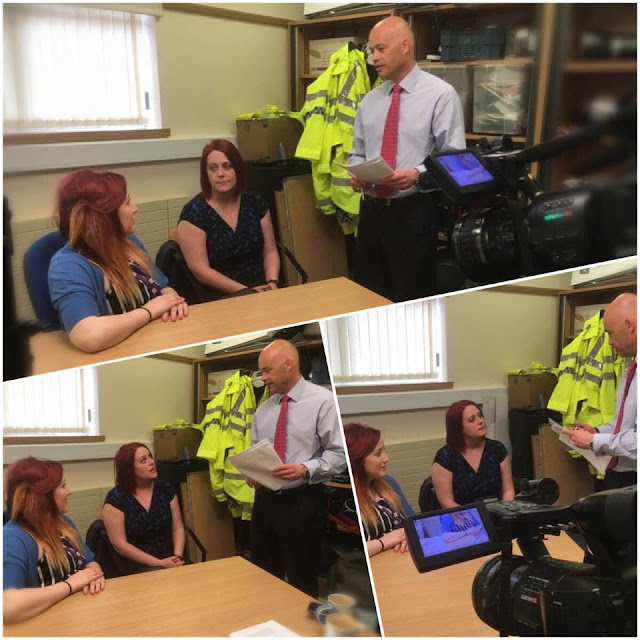 In fact, a lot of them have suggested offering to get the person (on the bridge) a McDonalds or cigarette as an attempt to build a rapport!
I'll always remember this one time that I was sat in A&E waiting for a mental health assessment and various nurses (who probably thought they were just trying to prepare me) kept telling me that I would be sectioned at it so I tried leave but was restrained and given a mild sedation. Eventually, the police were called and I was detained under section 136. I remember sitting there, and staring at this dirty, wet, muddy, brown rabbit that was sat under the chair in the corner of the room and feeling completely and utterly alone. Then the officer sitting with me asked what I was looking at. I told her and she promptly stood up, picked up the chair, and stamped all over the rabbit. Except to her, there was no rabbit. To her, she was stamping about on thin air for some girl who was hallucinating.
When she'd gotten rid of the rabbit, I saw her as being 'on my side' and willingly sat through a Mental Health Act assessment and the sectioning that inevitably followed; and when we found out it would take another 3 or 4 hours to get an ambulance to transport me to the psychiatric hospital, the police officer asked her superior for permission to take me in her car; explaining that she'd built a rapport with me and believed I'd go more calmly with her than I would three hours later in an ambulance. She was right. As much as I didn't want to go into hospital, and I didn't want to talk to the Psychiatrists, I felt like I could because that officer was there. Stamping on the rabbit made her my 'bodyguard.' I knew that I would be safe with her and that she wouldn't lie to me and would look after me.
Because she stamped on thin air for me. 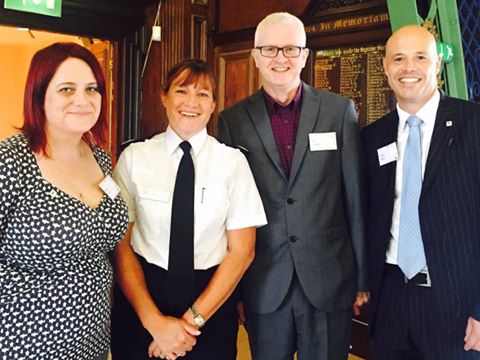 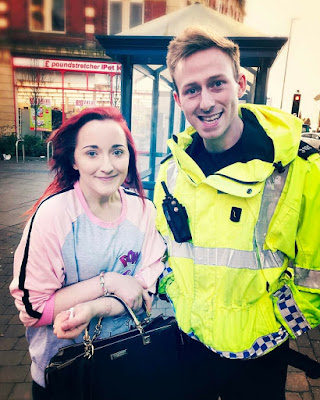 Inevitably though, there was another officer that I built a slightly different rapport with: PC Billy Mulligan. There was one time I was in his police car and he was talking to my Mum and I climbed over to the front seats and out the door. I was running across the grass and he pretty much rugby tackled me (although I'm sure it was a perfectly approved restraint method!) to the ground and I kicked out behind me... I later found out I'd given him a black eye and he'd told the other officers that he'd gotten it from some big tough men in a pub brawl! I made a point of correcting his story. And now over a quarter of a million people know the truth Billy!
I say that, because he reads my blog. I know this because I talk to him. I talk to him because he follows me on Twitter. He comments on my tweets. He encourages my work with Northumbria Police. He commends me on my recovery and has the ability to see how I was and how I am.
The man has saved my life (after the rugby tackle, we met on many more occasions) and absolutely deserved the 'PC of the Year' award. He deserves a million awards. He's an honourable officer - I believe he's recently been promoted to Sergeant (congrats if this is true Billy!) and a true testament to the humanity, kindness and passion that Northumbria Police holds, as a force.

The very first training session was so surreal to think back to the days when I was treat that way and stuffed into cages in police vans and would joke with fellow inpatients that I'd 'end up teaching them how to do it properly!' All of those times a police officer's attitude upset me, infuriated me, all those times I was called a 'trouble maker,' 'a regular one,' 'an attention seeker,' 'a cow,' a 'nuisance.' All of that was long gone and now I was in front of these brand new officers who called senior officers Sir and made sure their uniforms were perfect, and I called the Sergeants and Inspectors by their names (unless they were in a bad mood that day - he knows I'm talking about him!!) and wearing a 'staff' lanyard. Being called 'Miss,' or 'Aimee' and hearing 'excuse me?' and 'thank you for saying that' and 'I think you're so brave.' And applause. I am applauded by police officers. It makes me emotional just typing about it! It's incredible! And sometimes it makes me so sad to think of all the people being in the position I was and not knowing - not seeing -  losing all hope, to be in my new position.
But we can't look back. We can glance, take from it, learn from it, and put it back. We mustn't hold onto it. For change to succeed, people must believe. And you can't believe someone will change if you're clutching to all the memories of the things they need to change. I know this because my friends, family, professionals... they all had to forget about the old Aimee to trust in the new, safe, healthy one, and give her a chance at freedom. At life. At recovery. At changing. 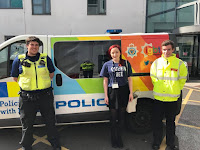 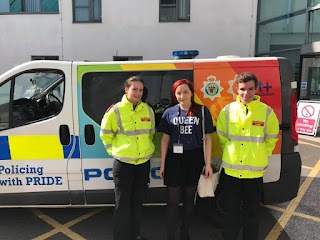 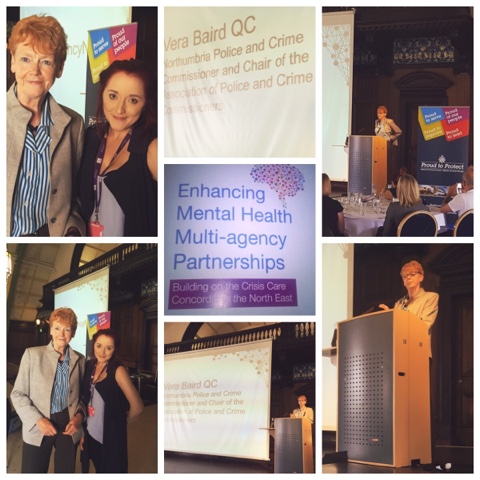 FOR MORE, CHECK OUT WHO I'M FOLLOWING BY CLICKING HERE: https://twitter.com/following

THERE'S ALSO A SHORT VLOG OF A DAY I SPENT AT NORTHUMBRIA POLICE HQ:
note: this vlog contains mention to PC Keith Palmer
also: please turn up your volume