THREE WAYS TO COPE WHEN THINGS GET UNBELIEVABLE | CELEBRATING 100,000 READERS IN FIVE MONTHS!! 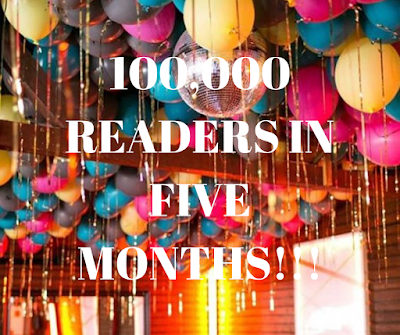 It took me over two years to get my first 100,000 readers and now I’m organizing my VERY EXCITING Christmas collaboration with a well-known company, and it’s meant looking at my numbers and I realized that it’s taken just five months (less than a quarter of the time) to achieve the same amount! I mean… where do I even start?! Thank you, first of all! Not just to the 100,000 new readers but to everyone who has been reading my blog before now – especially those who have been here since the very beginning in 2013! You guys rock! And a huge thank you to some of the very special, and inspirational companies, organizations, and charities who have trusted me with their reputation and collaborated or partnered with me to produce content for I’m NOT Disordered! You all help to keep me motivated to producing better content and help keep something that I’ve now been doing for six years, very exciting!


I find it very easy to feel overwhelmed with things to do with I’m NOT Disordered because for me, I’ll always think of it as this little thing that I started in my hospital room in a bid to find an outlet for pent-up thoughts and feelings. When blog posts excel, I always think about how they were – mostly - written from the comfort of my little one-bedroom bungalow! When something you do has started off so small it’s a big challenge to still recognize that same thing when it has grown wings and evolved into something hugely different. Does it still mean to you what it meant when you started it? Does it still hold the same importance?


I think that asking these questions – having to accept that I might not like the honest answer to some of them, is part of the reason why I struggle when I get overwhelmed by any emotions – even positive ones! So, I thought it important to consider the ways I cope in these situations in case there are others also struggling with this…

Grounding yourself is a very personal, individual thing and not everyone benefits from the same grounding strategies. I had a hard time finding what worked for me because initially, I wasn’t very open to trying all of the different methods that the DBT staff would encourage us – as inpatients – to attempt. The mains ones that I was reluctant to try were actually the ones that ended up being the most effective for me; Mindfulness exercises such as deep breathing, body scans and grounding techniques. Probably the greatest, and most helpful, grounding exercise I’ve discovered is the literal one of taking off my shoes and having my feet touch the floor/ground/grass/wherever I am! It does become a bit of a body scan in allowing myself to really feel the textures beneath my feet and concentrate on what the feel like, whether it’s soft or hard, whether it’s hot or cold.


I especially use grounding when I’m either hallucinating or feel as though I’m about to disassociate because it helps to bring me back to reality which allows me a greater opportunity to keep myself safe than I have when I have disassociated or am distracted by the hallucinations. I used to think the opposite – I thought that being ‘in the moment’ would mean I’d be the most unsafe I’d ever been, but being in Hospital when I was first introduced to mindfulness and grounding seemed to alleviate those worries to such a degree that I agreed to give it a go! I think that grounding is especially difficult in negative situations because - naturally – you don’t want to accept that it’s real and that something so terrible has happened to you. But pretending it didn’t happen won’t help in the long-term because it’ll mean that you don’t deal with it which prevents you from learning coping strategies which means that when you have memories of it, they’ll knock you back harder than if you’d accepted it’d happened.


For positive life events like my 100,000 readers in five months; grounding is always good to ensure that you don’t go too ‘high.’ One ‘symptom’ of Borderline Personality Disorder (BPD) is experiencing intense and overwhelming emotions, and this includes ones you’d label as being positive and pleasant; such as excitement, pride, or happiness. The trouble with these being overwhelming is that there’s bound to be a lull afterwards – a time when these positive emotions give way somewhat to negative ones or they at least dull. I’ve never taken drugs before, but I’d say that it’s probably like coming down off a high; that’s how intense emotions can be for people with BPD.

This is probably the greatest piece of advice where the unbelievable thing in your life is something negative. Talking about what has happened to you is the only way to get support from others because if they don’t know what is going on then how can they possibly know what to do to help you?

It took me two years to tell someone that I’d been abused and when I finally did tell someone it was only because I thought that things couldn’t possibly get any worse; I’d already began hallucinating, attempted suicide and been sectioned under the Mental Health Act! I figured that no matter what came from reporting the abuse, it couldn’t be any more challenging than what I was going through now.


Even though my abuser was arrested, CPS refused to prosecute him, and he has since had a promotion in his job; but I would never say that I regret reporting the abuse. And I don’t say that lightly because I know that saying this, can be encouraging for others to report any abuse they have experienced; and I’m the type of person who would hold myself accountable if I’d encouraged someone to speak up and something bad had come from them doing so.


You know that saying people use a lot? ‘The more times I say it out loud the more real it becomes’? Well I think that fits this part of the post perfectly. I found this helped a lot when my cat, Dolly, was put to sleep last year; the more people I told that she’d died, the faster my brain would accept that it had actually happened.


Using this in positive situations can be beneficial too because sometimes achievements don’t seem real and you can’t even begin to celebrate them until your brain recognizes that they’ve happened! This recognition can come from recounting the achievement over and over with different people until it finally begins to set in that it’s happened. But another way that this can help is where the event is positive, but you don’t believe you deserve it, so you push it away to the back of your mind. Talking to someone about this can help encourage you to recognize that whether you believe you deserve it or not, it has happened and you do need to deal with that.

I learnt Radical Acceptance through Dialectical Behaviour Therapy (DBT) and my immediate response to it was that it was the worst idea EVER! I thought that accepting that I’d been abused would be so unsafe and would leave me feeling the most suicidal I had ever been, so I was reluctant to co-operate with staff in learning ways to practice this skill. Radical Acceptance is an aspect of Mindfulness and Distress Tolerance which promotes coming to terms with reality.


I think that it’s natural to believe that this means you’re basically saying what has happened is ‘ok’ and that it’s acceptable. This was especially hard for me because obviously abuse isn’t something which should ever be deemed acceptable but the DBT qualified staff helped explain that this isn’t what Radical Acceptance means. It’s more about accepting that it had happened to me rather than trying to escape from the reality of it through hallucinations, disassociation, self-harm and suicide attempts.


Practicing Radical Acceptance is all about learning to accept an event in your life has happened through accepting the cause of it and the thoughts and feelings it has brought forward. It’s very important that in doing this, you come up with ‘coping statements’ that will help you stay safe and healthy during your Radical Acceptance e.g. ‘I was abused but it wasn’t my fault’ or ‘there’s no point in fighting what has already happened.’ Radical Acceptance is a DBT skill that can be adapted to both positive and negative events in your life, especially where you become overwhelmed and struggle with positive events.