HOW TO COPE WITH TRIGGERS ON SOCIAL MEDIA 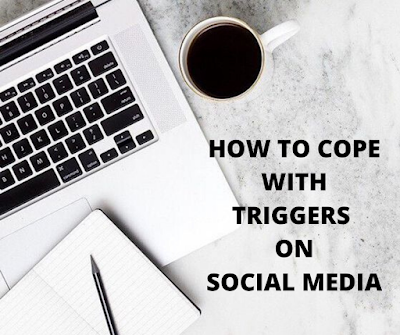 “Is there any way that you can stop it from happening?”


I like to think of myself as quite a fair and balanced person so that whilst I stand by the fact that I’m NOT Disordered has been hugely life-saving in many different ways, I’ll also talk about the fact that social media can sometimes be very negative and harmful. And it is my recent experience of this that has inspired this blog post…


A few accounts I follow on Twitter, follow an account that is largely connected to my abuser and so occasionally that account’s content will appear on my newsfeed. Last week, a photo appeared. It was of my abuser back at work and in a position where he could re-offend. So many difficult emotions came to the surface; ones that I hadn’t felt in a very long time and I reverted to old coping mechanisms. I felt frustrated that no matter what I – and others – say, he seems untouchable. Invincible. I had to go through so many obstacles and challenges in order to finally report the abuse to the Police; and the fact that CPS are refusing to prosecute, just makes it feel so frustratingly pointless. It was like: ‘why did I bother working so hard if it was all for nothing?!’ I was so blinded by these overwhelming thoughts and feelings that I didn’t stop to consider how I was responding to them. I didn’t use my Dialectical Behaviour Therapy (DBT) skills or ring someone to talk it through; I just turned all of the frustrated anger on myself. I knew I wasn’t the right person; I’ve learnt that I don’t deserve to be in pain or to be going through everything I have experienced; and that suicide isn’t the best revenge. My Nana and Mum always brought me up to believe in karma and that what goes around comes around, and if this is true then I want to – and need to – be alive to see him get his comeuppance.

This whole experience made me realize that ‘triggering’ is probably the best word to sum up the negatives of social media, because it can trigger so many behaviours, thoughts, and feelings. It can trigger online bullying and trolling, thoughts of self-harm, suicidal ideation, upsetting memories, and difficulties with body image and eating habits; to name but a few! So, I came up with a few tips on how to cope with the triggering aspect of social media…


There’s so much controversy on social media and there are some people/organizations, that will sensationalize these things in order to cause drama, increase their following, and get attention. There’s so much sensationalizing in mental health, and it’s usually from people who have very little personal experience of the subject. I guess that for these people who know very little about the ins and outs of mental health, it’s something quite strange and it becomes dramatic and far-fetched. Accounts representing newspapers and TV news channels, are usually the guiltiest of this with their consistent content about celebrity suicides or on the amount of escaped psychiatric inpatients who have gone on killing sprees! They come out with all of these stories that yes, might be true and factual, but they add an element to it that almost glamourizes the issue or that is purposefully there to cause a fuss and attract attention.


Recognize that those who hide behind their keyboard, are not worth your tears


Easier said than done perhaps. In a world where technology is everywhere, spiteful comments from an anonymous account can feel overpowering and leave you thinking that there’s no escape from the abusive messages. When I was being bullied online, it was horrible because before social media, where you were being bullied at School, it meant that home was usually a safe place where you’d be free of it. Now, though, it’s like there’s no escape and you can’t hide from it. This means that it’s harder to see that the people who bully online are pathetic. They’re hiding behind the power of their keyboard and its usually jealousy that influences a person to begin exhibiting bullying behaviours.


I completely understand and appreciate that there’s a lot of people out there who are extremely passionate over controversial issues and sometimes it just isn’t realistic or fair to advise that those people silence themselves and avoid expressing their opinions. What is realistic, though, is to warn people that if they’re going to declare their thoughts to the general public, then they had better prepare themselves for an aggressive rebuttal. I don’t believe it’s right that this can be a possible response; but it is likely and it’s the reason why I don’t make a habit of sharing my opinions on some topics. I’m just not willing to put with the stick I might get if my opinion is unpopular or disagreed with.


Remember that everyone is entitled to an opinion


Bit of an age-old saying isn’t it? And a very tired out saying these days! I do feel that some people use this fact as an excuse to defend their discriminatory beliefs around race and sexual orientation etc., though! So, it’s important that this doesn’t become the case and that you can recognize when it is happening. There was recently a bit of a controversial issue on Twitter around what to call mental health service users with some people thinking it should be ‘patients’ and finding ‘service users’ wrong. I decided to weigh-in slightly and said that I thought it was ‘each to their own’ and that whilst I use and prefer ‘service user,’ if I were talking to someone else then I wouldn’t mind using the term they preferred out of respect for them.


I had an assessment with the Crisis Team recently and they offered me telephone support, but I explained that, for me, it doesn’t work because I find help and support more effective when it’s in person and is properly visible. I do think, though, that some of this belief stems from experiencing auditory hallucinations and that having to spend years learning that the voices weren’t real, has really knocked my confidence in anything that isn’t right in front of me for everyone else to see too!


When I told people about how I discovered this recent news about my abuser, I was asked a few times whether I’d ‘gone looking’ for the information or if it really had just happened to come across my newsfeed. And it honestly was just by chance, but it made me think ‘what would be wrong if I had gone looking for it?’ I get that some people will think that you’re just setting yourself up for upset if you’ve purposely searched for something, but those people need to understand that a person could have many reasons for doing this. They could just be curious about it. Or they could be wanting to test their strength and ensure that they can tolerate their triggers now… No matter what the motivation, a person shouldn’t be judged for doing this.


There are so many Facebook support groups, mental health blogs, and Twitter hashtag support chats out there on social media that can provide help and support for people who might be struggling. They provide the opportunity to communicate with like-minded people who can properly empathize with yourself and who can provide a sense of comfort and support that others may not be able to. I’m NOT Disordered and the opportunities it has afforded me have been lifesaving and I just hope that others can see social media in this light.
Labels: coping, facebook, help, mental health, social media, support, tips, trigger, triggers, twitter
SHARE:
Newer Post Older Post
Home