CAN TUNNEL VISION EVER BE A GOOD THING? 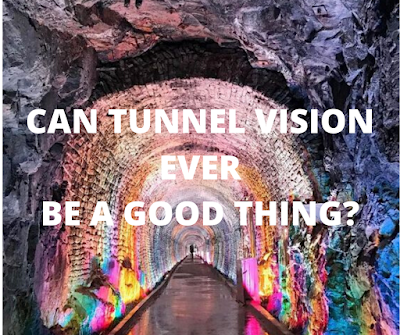 “Vision? What do you know about my vision? My vision would turn your world upside down, tear asunder your illusions, and send the sanctuary of your own ignorance crashing down around you. Now ask yourself, are you ready to see that vision?”

I’ve recently had a friend start struggling with their mental health and I’ve witnessed them go into tunnel vision where they were so set and so focused on one thing it was as though nothing I could say would even be heard, never mind have an impact! It was strange for me to actually see it because my Mum has always described me as having tunnel vision when I’m mentally unwell and struggling with thoughts to self-harm or with suicidal feelings.


But self-harm and suicide aren’t the only aspect of mental health where tunnel vision is used; and they weren’t the first area I used mine in. The first time I can think of that I used tunnel vision was with the abuse I went through when I was fifteen, and I thought that no one would believe me if I were to report it to someone. My own conviction and the fact that it was consistently supported by my abuser and his comments on how everyone already thought me to be a liar and how no one would believe him capable of doing such a thing, cemented this belief. It turned any evidence to the contrary invisible and no matter how many opportunities I had to tell my lovely, caring, mum what was happening to me; I just couldn’t see beyond the conviction that she’d not only not believe me but she’d disown me for lying too! I was so truly lost in this lonely, isolating thought that had left me feeling so completely disregarded and forgotten about – the exact opposite of what was actually going on at the time(!) – that I almost wondered if I were the only person in the world.

I remember being so caught up in the horribleness (understatement) of it all that I couldn’t see it ending. Ever. After a month or two, I honestly began to believe that the only way it would end would be if I died; I was blinkered. I couldn’t see anything that didn’t fit with what I’d already assumed and begun to believe and put conviction in. Sort of like rose-tinted sunglasses; where there’s something there that’s got your point of view tainted and incapable of seeing anything remotely different. I think that this was so strong that probably the one thing to save me was the basic human instinct of survival. At that time, I just wanted to end the abuse; I didn’t want to have to die to do it! So, I came to the conclusion that even if no one believed me, reporting the abuse was the best way to try and stop it. I was at the point where being believed would be a very welcome bonus. Ironically, I wasn’t believed by that very first person I told, yet my punishment for ‘lying’ actually stopped the abuse from physically continuing!


After overcoming this tunnel vision, I was faced with a whole new tunneling belief; I would never recover. Never get better. The abuse had ruined me, and I developed a blinkered opinion on self-harm and suicide… There was this one time when my Mum spoke to me about it and asked what I would do if I were about to leave the house to attempt suicide and she had a heart attack in front of me. I told her I’d ring for an Ambulance and then go anyway. I won’t say that I’ll never forgive myself for saying that because it’s not about forgiveness… It’s about owning the fact that once upon a time, I was the person that said that. That felt like that. And I’m sure there’ll be some people out there thinking ‘how can you own that and not feel bad?!’ It’s very hard not to! The thing that helps me the most is knowing that my Mum wouldn’t want me to feel bad for it; she wouldn’t want me to hate myself, and I think that she’s the one who has the most right to determine the consequences for what I said to her! I think that she truly knows that I was poorly when I said it. I wasn’t in my right mind. I wasn’t thinking clearly. Or at least I was… Actually! It was a very clear decision and answer! It just wasn’t healthy. Or right.


She – and I – know that this comment isn’t who I am. It’s who I was. Our relationship isn’t like that. Being in mental health services, I met a lot of service users who had troubling relationships with their parents and other family members, so I’ve known how lucky I am to have the unconditional love that I have from my Mum. And that love is most definitely returned. Whilst I don’t feel bad for this comment, I do feel the need to make up for it. To apologize for becoming that person. And hopefully I do that by respecting, appreciating, and loving my Mum every day.


I feel that this instance is a true representation of what it means to have tunnel vision and just how powerful it can be. I think that it’s also a trait of self-harm and suicidal ideation, to be so caught up in your thoughts, feelings, and intentions that you can’t see past them and to any consequences or alternative coping skills. I mean, it probably didn’t matter whether I knew the Dialectical Behaviour Therapy (DBT) skills or not, I wouldn’t have seen them beyond my tunnel vision of cutting or taking an overdose or something. Those who self-harm or who attempt suicide have a number of different motivations behind it but perhaps the one common one is that they feel it’s their only option. Their one and only chance to improve how they feel. Because if people thought – even for one moment – that there was an alternative way, would they still do it?


This tunnel vision meant that within three years, I found myself waking up from being on a life support machine in the Intensive Care Unit (ICU) after attempting suicide. And when I was told that I had to go to a psychiatric hospital over one hundred miles away from home, I acted as though ICU had scared me into wanting to get better and agreed to go, but actually, I thought that getting so far away might improve my chances of succeeding at committing suicide. I thought that being so far away from everyone who loved and cared for me would mean that there’d be no one there who’d be invested in my safety and my life. Of course, the staff there were prepared for this and when I attempted to leave the hospital, I was instantly sectioned under the 1983 Mental Health Act! I now know that this was probably the best thing they could’ve ever done for me at that time because now I’m in recovery I can appreciate those who fought for my life when I didn’t fight for it myself. When I was so stuck in my tunnel vision that I’d lost all hope and any passion for life was completely squashed by the blinkers.


Being sectioned allowed me to get help for my ultimate blinkered belief that I was destined to die as soon as possible. Through lots of Psychology and DBT groups, I learnt how to rationalize this and see that this was something I’d developed myself and that it did not actually have a cemented foundation. No one had spent any time trying to convince me that it was true – they’d done the exact opposite actually – yet I’d convinced myself of it…


Now, to answer the question in the title of this post – no. But in all honesty, I’m not all that sure that I can give an accurate, unbiased answer; I’ve always used tunnel vision in a negative way so how on earth can I give any view on it being positive? There might be people who will disagree because no doubt there are people out there who use tunnel vision as a coping mechanism for all of the bad things in life. They use it to only see the good and to focus on the positive things that bring happiness and light to their life. But is that fair? Is that realistic? Is using tunnel vision ever realistic or fair?