THE POWER OF ‘NO’ AFTER RAPE 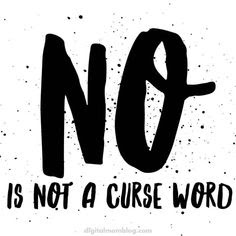 Trigger Warning: This post will contain discussion of rape and sexual abuse, if these topics are upsetting then please don’t read this post. If the topics become upsetting, then please seek professional support and advice!

This piece was inspired by a little something one of my inspirations; Victoria from the blog and YouTube channel; InTheFrow. You can read her piece about the importance of saying ‘no’ to things like favors for people, event invitations, and other tasks and opportunities, here. The piece left me thinking about just how powerful saying ‘no’ can be to someone who has experienced the ultimate act of betrayal. The one act where ‘no’ is so essential that without it, the act becomes a crime…

In 2018 the Director of Public Prosecutions; Alison Saunders, made the heinous comment that unless you have clearly said ‘no’ to sex, it is not rape. You know when you’ve had this thought in your head and literally everyone has told you that it isn’t true and not to worry about it? Then someone confirms that thought and agrees with it? And it completely throws you because now you question the reliability of all the people who reassured you of the opposite?! One of the many reasons why I didn’t report the six-month-long abuse and one instance of rape any sooner was because I couldn’t remember ever saying ‘no’ or ever fighting back or screaming for help. I worried – no, I obsessed over – this fact and that if I were to tell someone, their response would be that I should’ve done one of those things in order for it all to have been illegal. I think that the utter shock that something that was rarely talked about at that time (2006)
was actually happening to me, was enough to silence me. And the disbelief of who it was that was doing it to me, only contributed to my reluctance to report it.

I think there was also a part of me who was very unsure about which reaction I’d rather have; did I want someone to tell me that yes, I’d been raped and abused or did I want them to say ‘no’ because I hadn’t protested enough, it wasn’t a crime? Would I rather be told that it was all my fault and that no one else was to blame? Or that it was the fault of someone else, but that nothing I could do would ever truly feel like revenge or justice? I was so terrified that the ‘no’ response would destroy me and leave me feeling so blameworthy that my already present suicidal thoughts would just get worse.

Another of the many reasons I didn’t report the abuse was that refusing to, was my first opportunity to actually say ‘no’ to doing something. I was desperate to regain some control and power, and I knew with absolute certainty that the moment I told someone what had happened, I’d lose control over the entire situation. Whoever I reported it to would choose who knew next, then someone would be choosing when I had to talk about it and exactly which details, they wanted me to talk about. I couldn’t cope with the thought that I would no longer own my experience, and that I would have very little rights and very little say over it.

Of course, using the power of ‘no’ as motivation not to report the abuse and rape to the Police, wasn’t exactly the best call to make and after two years, I decided to use ‘no’ in response to being silent so I spoke up, and my abuser was arrested. I’d finally come to the conclusion that I’d rather say ‘no’ to keeping quiet and to this happening to someone else. I’d learnt that my words have power and by that point, not speaking up had led to me attempting suicide because I was so disassociated from the abuse that I began hallucinating.

I didn’t benefit from reporting the rape and abuse as much as I’d hoped; it was a huge weight off my shoulders and it meant if he did do it again that I could say I’d done all I could to stop that; but, talking about it and CPS refusing to prosecute was an even bigger setback to my mental health. I began using ‘no’ in response to the many professionals – Police, Paramedics, Social Workers, Psychiatrists, Nurses, Doctors… - who offered me help, support, and advice. I refused everything because I thought that saying ‘yes’ would make me weak and would be like admitting that I needed help and that something was wrong. Saying ‘no’ felt brave, and strong. Defiant, and courageous. As though saying ‘no’ made me independent and I believed that I needed to stop relying on others because ‘others’ didn’t stop the abuse and the rape from happening. I might’ve refused to tell anyone what was happening but that doesn’t mean I wasn’t angry that people didn’t notice the few signs that were there; the daily showering, the self-harm, the behaviour and attitude change, my grades dropping… I mean, there were things there and they were enough that when people found out what had happened to me, they would say ‘oh; now that all makes sense.

Another ‘no?’ Denying that I was experiencing any thoughts and feelings was surprisingly easy because other than the occasions when I felt suicidal, I mostly felt numb and empty. I think that sometimes this emptiness left me able to swallow so many tablets because I was desperate to be full of something. And the numbness just sparked off my self-harm through cutting because I needed to see the blood to reassure me that I was actually still alive and that I wasn’t just the empty shell that felt.

Professionals would ask how I was feeling, and I’d tell them ‘fine’ and the ones who knew me would doubt this, and the ones who didn’t know me would be reassured and continue going about their business! After very little time in mental health services, I learnt that saying ‘no’ to the question “are you feeling suicidal?” was really the only answer people wanted to hear. And it was the only reply that would help me continue to attempt to take my own life. Telling a Police Officer or a Doctor or someone that I wanted to be dead just led to the whole ‘I’ve-got-a-duty-of-care’ line and typically, me being sectioned under the Mental Health Act 1983 and losing the ability to hurt/kill myself.

So, I said ‘no’ until I was at the point of no return in 2012 and was told that under the Mental Capacity Act 2005, Doctors would be putting me on life support in order to give me the antidote for the near-fatal overdose I’d taken. My last words before they put me under? ‘I hope something goes wrong and I die anyway!’ When the sedation was too light and I woke up still on the ventilator but unable to move to show someone that I was awake, it was probably one of the scariest moments of my life. Nurses and Doctors only realized I was regaining consciousness because a tear slipped down my cheek and my pulse elevated. When I woke up properly, I could still remember that terrified feeling and it left me convinced that I didn’t want it to happen again. I knew that meant changing my attitude and finally saying ‘yes’ to the help being offered and within days I was sectioned under the Mental Health Act and transferred over 100 miles away to a medium secure psychiatric hospital specializing in my diagnosis of Borderline Personality Disorder.

Saying ‘yes’ was difficult and initially, it felt like a step back after so many years of feeling that ‘no’ kept me in control; but through Psychology sessions and Dialectical Behaviour Therapy, I learnt that I could choose to maintain that control in a more positive and healthy way.

TOP FIVE LESSONS LEARNT ABOUT 'NO'

1. You should never be judged for saying it

2. The main power is in the ability to make the decision and not whether that decision is a 'no'

3. 'No' shouldn't always be seen as negative or unhealthy