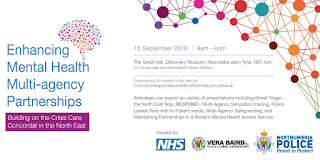 This event was the first of its kind; because a lot of the work being done in the North East (particularly by Northumbria Police and Northumberland, Tyne and Wear NHS) around agency's coming together in partnerships to provide unique mental health-related services, has not been done anywhere else in the country. The aim in hosting the event, was to publicize the successes that these new services have achieved; especially the fact that our area is now second in the country for having the least amount of custody uses for section 136 of the Mental Health Act 1983. Professionals from all around the country attended the event to gain inspiration; that would, hopefully, result in better mental health care on a whole.
Needless to say, that to not only be invited; but to have been asked to give a speech and presentation there?! I was honoured. 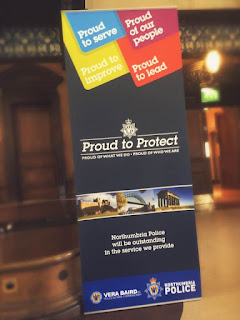 Walking into the room late (there was mix-up with my taxi), to find an entire room full of people switch the gaze from the speaker on stage to me! "Speak of the devil!" Inspector Steve Baker (Mental Health Lead for Northumbria Police) said; and took everyone's attention as he began to explain who I was and what I do. So straightaway I felt respected or... Maybe that's the wrong word. Appreciated? I'm not sure! Anyway! Claire Andre (Police Liason Officer for NTW NHS) started silently, and frantically, motioning for me to sit between herself and John Lawlor (CEO of NTW NHS). This was another moment that caused the feeling I can't put into words! And to then have some whispered banter with each of them... I think what it is, is that; as a 'Service User' I always felt inferior.
I guess that feeling came from years of not being trusted with the most basic of things. And having to get permission from a gazillion (slight exaggeration!) people to go anywhere... Best interests and all that, but still... And so, I'm always aware of anything like that when I'm working with organizations such as NTW and Northumbria Police.
Now that I'm discharged from the Community Mental Health Team (yay!) and off my anti-psychotic medication (yay!) and without A&E visits for overdoses and self-harm (yay!); I feel more equal. I prefer to be treat like a colleague now. And so, these initial three things had me completely reassured that for the rest of the event, I'd be treat the way I wanted to be.
[NOTE]
This event took place on Thursday 15th September 2016
It's taken me a little while to get these blog posts up about the event because I decided to do them in a completely different way to how I'd usually blog about events. There was a special focus on social media at the event as we had created a hashtag. There's a growing community of mental health activists and professionals on Twitter; with many organizations creating accounts and the growing number of people who are defying the stigma to speak out about mental health. So, it shouldn't have been a surprise when we discovered (within the first four hours of the event) that #MultiAgencyNE was trending! It is because of this, that I decided to write about the event via the many tweets that were posted during it! 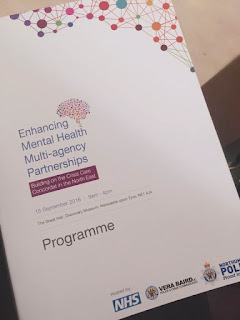 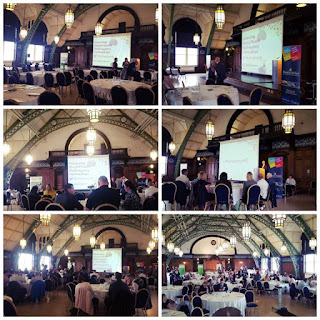 VLOG of the entire morning (inc. sneak peeks into the next post's content):